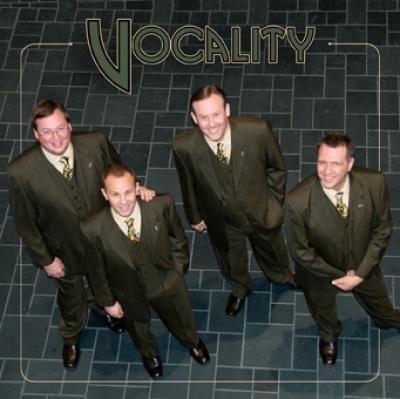 Vocality's new disc is like a concert in your closet. Nice warm voices, good tuning, pleasant songs. Hooray! Best of all, you won't be embarrassed if your neighbor's kid comes poking around.

At its best, the chords are tight and the tags ring out like only voices can. There's something timelessly charming about barbershop chords and these guys keep that something front and center. But they don't sound too generic — their sound is youthful and makes them sound like themselves, not like somebody's clip art come to life.

Love-Eyes Medley is the best on the album and rightfully shines out as the first track. Its successor, Lazy Day, has some yummy chords and a great ending, interspersed with a mediocre intro and a lot of humdrum ba-ba-baing. Enough with the sheep, bring on the tunes. From there it's Moondance, and then I kind of fall asleep until the talking starts in Seasons of Love. Works like a charm, every time through. As far as I remember, all the songs are real nice and the singing never gets bad so that's all good.

Jeez, though. Nothing too catchy here to keep us on our toes. Even the annoying outtakes tacked on to the final track are plain vanilla. No train wrecks, no swearing, just some nice singing that collapses into giggles right as it's going off the rails. Good work men — glad you saw it coming. And thanks for sharing, I guess.

Based on this album, I think you'd have a great time at a Vocality show — the group sounds talented, professional, and well-rehearsed. That said, I'd only buy this record if I had a more specific reason to listen again and again.

The men of Vocality can sing pretty darn well. They have a nice blend and a sound that lends itself to barbershop classics. At the end of tracks like Love-Eyes Medley and Who'll Take My Place?, you can hear the final chords ring after the singing stops, and that kind of locking-in on the tags is one of the most important things in a barbershop quartet. The one live track, That Tumble Down Shack in Athlone, stands up to the musical standard of the studio recordings. A Garden in the Rain, an arrangement by David Harrington which incorporates Over The Rainbow, is an album highlight.

The trouble is that almost half of the tracks on the album are not from the traditional barbershop repertoire, and while they're still musically solid, the interpretation leaves me flat. The worst offender is Seasons of Love, which is arranged in a manner that removes all of the gospel flair of the original and draws attention to awkward runs in the melody line. The background parts sing a single bar in repetition for the first minute and a half of the song, with half of that time being a spoken introduction. Reaching the chorus, the backs move to long sustained lines, turning what in the original is a gospel choir exulting about love into a borderline drone of "Love, we mean love, love we want love" that feels boring and trite. And just as the arrangement moves to an uptempo rendition, with the four voices in a round, within twenty seconds the round collapses into yet another drone.

While the trouble with Seasons of Love lies in the arrangement, other non-barbershop numbers are hampered by the performance. Corner of the Sky, the originally soaring signature number from the musical Pippin, belies the refrain "I've got to be where my spirit can run free" by sounding restrained and fairly subdued. Moondance is the most straitlaced and swing-free rendition I've heard, with an unnecessary high-hat effect in the verses that feels awkward as the only vocal percussion on the album. The two classic rock songs, That'll Be the Day and All My Loving, are standard CAP arrangements, but the Deke Sharon take on All My Loving is again undercut by a tempo significantly slower than specified in the arrangement — "fast four" this is not.

I think Vocality has the potential to put out a top-notch album, either by focusing on their barbershop repertoire or working to apply the verve and enthusiasm of tracks like Love-Eyes Medley and Come Rain or Come Shine to their more mainstream fare. But even when they're at their most energetic, the album still feels a bit bland in spite of the solid musicality. Instead of spending the first 45 seconds of a song explaining why it's special, I'd rather that they demonstrate through a performance that truly engages both the listeners and the material.

There's not much to say about Vocality. They're a really excellent barbershop quartet, an identity which, musicality aside, lumps them into a category of music not often associated with creativity and stylistic advancement. That said, there are moments where Vocality jumps just enough outside the traditional confines of their genre to surprise the listener.

The album's first impression is that it's going to be pretty standard material, starting off with a well-executed medley. As if we expect anything less of a top-notch barbershop quartet like this, the tuning and blend is impeccable. Barbershop blending necessitates very bright singing from every member of the group, the bass included, and most of them pull it off excellently. There's one singer who bounces around in stereo placement and range that isn't exactly the most appealing and sticks out on occasion, but more often than not Vocality sounds about as close to one voice singing as you can get.

A few of the song choices and, more importantly, arrangement choices, leave something to be desired. There are a few tunes on the album that while not being bad by any means, are definitely out of Vocality's comfort zone. That'll Be the Day seems a bit too instrumental for the group overall, as do the non-lyrical sections of a few other songs, but the singers still manage to pull the songs off without massive problems. Vocality is, however, clearly more comfortable singing arrangements where all the voices are singing homophonically.

The one thing bringing this album down most of all is the lack of contrast. Because of the unified tone and sustain the group puts out, their changes in feel rely almost entirely on texture and not on individual singers' emotional shifts. Every part of every song sounds like they're smiling, just a little, while they're singing.

This actually works to their advantage on nostalgic songs like That Tumble Down Shack in Athlone. It's a live track, and is far and away the best one on the album. The studio seems to have sterilized the sound of the group a little. Here, the individual quirks and microdynamics of each singer are much more audible and attention-grabbing. A Quiet Place is the only studio track that comes close to this level of emotion, mostly because the arrangement is so crunchy it seems to require that extra level of detail. It's pretty far outside what you'd expect of a normal barbershop tune, and <em>is</em> the kind of innovation I'd like to see coming from this style.

I haven't heard of this group before, but its demonstrated ability to sing both old standards and newer-sounding arrangements is something the genre could use more of. It's certainly not the kind of music I'd jump for, but Vocality is doing what it does really well, and this is what barbershop needs more of.