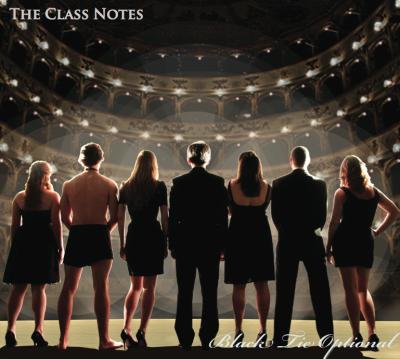 Black Tie Optional grew on me as I listened to it over and over one Saturday, searching for something to say. It starts off slow, like just another record that somehow washed up in my mailbox. But then Gwendolyn Waichman started to sing and I perked right up. She sounds great on No One and even better on Hometown Glory, later on down the disc.

With a soloist like that, this group might be on to something. And so I listened some more, waiting to fall out of like and into annoyance — and lo, annoyance never showed up. If that ain't quite love, it's the next best thing and suggests that this album might be worth your time. It turns out that most of the group sings pretty well and they have figured out how to keep a pretty good beat.

Intonation, pitch and song selection are more middle of the pack. I didn't hear anything too egregious, but I also quit listening with my super-nitpicky ears after the first couple times through. (After this many a cappella albums, if I'm not quickly horrified then I'm willing to give a group credit for doing their homework. Although this group did earn some amusement points by misnumbering the track list on the back of their album. It's possible they sent me a note apologizing and saying it's being corrected, but I can't possibly keep up with anything besides the actual CD so I have no idea.) I do wish they had resisted the medley impulse — the uptempo King of Wishful Thinking that starts the '80s medley is pretty great, but the subsequent Everybody Wants To Rule the World is dancy mush and Take on Me barely registers.

Hometown Glory might be the best track on the disc, but there's another strong contender in Only You. The Yaz chestnut is in fine form here, updated with a good groove, a pleasant baritone solo and a great feel, one of those unquantifiable songs that just works for me every time. On the strength of that, maybe this disc will work for you.

One key problem that plagues The Class Notes' Black Tie Optional: there's too much detail. There are two key problems with too much detail. First, it's distracting to the listener, especially if the same idea can be communicated with a simpler vocal line. Second, it's difficult to execute — and while the Class Notes have done an admirable job getting all the notes onto this recording, it often sounds as though these singers are focused more on the notes than the feeling of the songs.

Take the opening track, No One: it starts with a percussive melody that is precisely executed, but it's so pointed that it allows no room for the solo line to be heard. The same problem plagues the rest of the song, over and over again: on every climactic moment in the solo, the backing voices are right there, dum-da-dum-da-dum-da'ing their way over the soloist and into our ears.

The opening bass line and backs of Dancing In The Street are too note-heavy, and the backs on Nothing Ever Hurt Like You just overpower the soloist. The oscillating backs on Hometown Glory start with such a haunting tone, but by the time the soloist line kicks in, they just become distracting. Similarly, their dynamic swells are an admirable effort to create difference amid the repetition, but it just becomes too busy beneath the sultry solo line. In other words, Gwendolyn Waichman sounds freakin' fierce on the lead here, and I'd like to hear more of her and less of the stuff that's just not quite as important.

Simpler songs come across better: Bottle It Up oozes sass (and the backing voices do a great job of dropping dynamic changes into every phrase, giving the song a sultry, stretchy feel). Even just knowing where to be busy and where to simplify makes a huge difference; the intro to Take On Me ('80s Medley) skitters out of the speakers, but the group tones it down when the soloist comes in. There are still some busy moments within the song, but the group sounds engaged in the delivery and the transition between the first two songs in this medley is really smooth. Simpler doesn't always work best for the group, though: Only You is a beautifully lush arrangement and delivery, but it's so slow that it drags into a sleepy performance.

All things considered, though, these problems are not insurmountable for the Class Notes: after all, it's far easier to simplify something than make a boring performance interesting. The group should take a step back and think about what is most important in any given song (hint: it's usually the soloist!) and figure out how to let that shine through, even if it means simplifying some technically proficient arrangements.

One request for proofreading: the album has 12 tracks, but the track listing on the back of the digipack lists completely bypasses track 9 and ends with track 13. We get it: mistakes happen. Please consider having a set of cold eyes look over your album art before it goes to the press.

The album art for Black Tie Optional evokes that dream where you find yourself on a stage in your underwear, panicking because you have no idea what you're supposed to do. It also serves as a convenient metaphor for the album itself: while the Class Notes have musicality and elegance to spare, a few key pieces seem to be missing from this picture.

The first half of the album is a non-stop barrage of staccato singing and overly enunciated syllables. There is plenty of energy but hardly any emotion. Dancing in the Street is the most overt example of this. The backing block sings nonsense syllables and lyrical echoes alike with an intonation that is more appropriate for musical theater, and the group is so preoccupied with its singing technique that the singers forget to have fun. Fortunately, the killer percussion overshadows just about everything else about this track.

Arrangements are hit or miss. The better ones, like Grace Epstein's take on No One, channel the group's natural intensity into a driving force that propels the songs forward and forces the listener to sit up and pay attention. Unfortunately, the failures outnumber the successes. Take On Me ('80s Medley) takes King of Wishful Thinking at double time for no good reason, and the transitions to Everybody Wants to Rule the World and Take On Me are as clunky as they come. And Lucky, which should be a sweet marshmallow of a love duet, loses its two leads in a mess of overwrought background syllables and poor mixing.

It's not all bad news, however. In the second half, we get three of the album's best tracks in succession. Laura Izibor's Shine is a fun, bouncy ride that holds up well to multiple listens. Whatcha Say may have gone a bit overboard with the effects — the lyrics of the hook are filtered beyond recognition — but it sounds really cool. And sandwiched in between is Hometown Glory, far and away the best song on the album. The opening is a glorious, drawn-out tapestry of sound, and the lush mixing sounds incredible. Why did it take so long to get here, and why couldn't all the songs sound this good?

Two more bright spots come in the form of Thomas Shepherd and Gwendolyn Waichman, each of whom turns in multiple excellent lead performances. Mr. Shepherd acquits himself nicely with smooth R&B style on Nothing Ever Hurt Like You and Whatcha Say, and he does equally well (when we can hear him) paired with Lindsay McDonald on Lucky. Ms. Waichman provides a killer power lead on No One and simply oozes soul on Hometown Glory. I have to hand it to the Class Notes for choosing quality over equality and showcasing their best people on multiple songs.

Sadly, it all falls apart again with Only You, the Class Notes' signature song and traditional album closer. I realize that they can't do much about the old, fusty arrangement, but they could at least pretend to enjoy singing it. The too-bright arpeggios and too-dark soloists also sound especially harsh when compared to the trio of fantastically produced tracks that precede this one. If this boring ballad had been given the same lush studio treatment as Hometown Glory, it would have ended Black Tie Optional on a much better note.