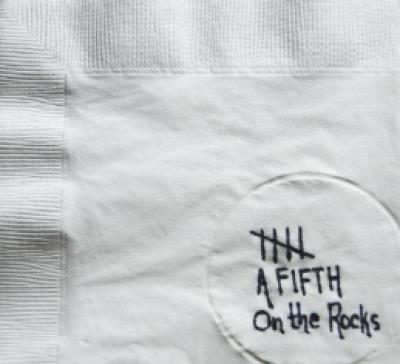 The latest album from The Sing Off season two veterans On the Rocks may be entitled A Fifth, but it might just as soon be called Random Notes — as in the arranging company founded by award-winning a cappella veteran Tom Anderson, of Four Shadow and Ball in the House fame.

To be fair, On the Rocks has been putting out quality work for a while now and A Fifth — a recent CARA winner for Best Male Collegiate Album — is no different. It features a tight, crisp sound, and energetic performances all polished to a gleaming shine by the legend that is Bill Hare and OTR alum and founder Peter Hollens.

But make no mistake about it. The star here is really Anderson. His are the sorts of arrangements you hope to hear once or twice on a collegiate album (if at all), and in this case we're treated to his handiwork on ten of the thirteen tracks. There isn't a dud arrangement to be found, but my personal faves of the uptempo tracks are the opening Sing a Song and Listen to the Music, both of which bring a vocal jazz sensibility to a funk groove and incorporate some nifty color chords and substitutions that are inventive without ever venturing outside tasteful and appropriate. Listen to the Music also features the most enjoyable syllable figure I've heard in a long while: a Samrat-esque "diddley-dang-dang-g'diddle-it / diddley-dang-dang-gang-g'diddle-limma" which sounds a lot better than it reads. Mention must also be made of And So It Goes which was groan-inducing when I saw it on the track list and had me smiling from ear-to-ear by the time I was done listening. It's the same song you've heard done to death in variations on The King's Singers' version, but Anderson doesn't shy away from playing with chords ("you can make decisions too" is a particularly nice moment) and tempi, preserving the essence of the song while still giving us something new and engaging.

If Anderson is the star, the Best Featured Performer award should be shared by OTR's trio of original songwriters who each contribute a track that is certainly close to, if not already, radio-ready. Despite its recent runner-up finish for the CARA for Best Scholastic Original Song, Joshua Heying's Lighthouse felt like the lightest of the three for me: a pretty song, with a lush chordal background that washes over the listener without making that meaningful an impression. Caleb and Sol Rexius's Afloat is a bit more impressive composition, with a "watery" background effect in the arrangement that is most à propos, lyrics with true poetry and substance, an effective bridge and a lovely transition into the final chorus. Best of the three is Nick Firth's The Moment (I Got Lost) which layers hyper-literate lyrics over a doo-wop feel at the top and segues into funk with a smattering of group scat riffs in the second verse. Despite its relatively simple structure, it's a really nifty song that doesn't sound anything like so many other verse-chorus-repeat-bridge-final chorus songs we're used to hearing from many professionals, let alone collegiate songwriters.

There are certainly those who might argue that such significant use of Anderson is "cheating" of some kind. Indeed, I might have made that argument ten or more years ago, when I clung to the notion that a group's arrangements should be generated from within; that recordings should be a reasonably accurate reflection of how they sound live; that extensive processing and sampling was also "cheating", and that groups who couldn't afford such "tricks" shouldn't be penalized in our reviews. But as they say in Fiddler on the Roof, "It's a new world, Golde. A new world." Sure, there may be an extra special enjoyment in hearing a group that does all of its own arrangements, and/or records its own albums, and/or can sound just as good live as they do on a CD. That definitely satisfies the purist in me. But regardless of whoever put together most of the arrangements and whoever recorded and mixed the tracks for them, On the Rocks still had to go into the studio and perform this material. And perform it they have (with the exception of All the Above which feels more assembled than performed). Extremely well. And the result is a wonderful recording.

Somewhere along the way and more often than not, I guess I've stopped caring how they make the hot dogs. I'm just happy when I get to enjoy a really good one.

The guys at the University of Oregon have done it again. A Fifth is an incredible sonic achievement. But it is chock full of songs that I really don't care to listen to repeatedly. It's created a tug-of-war that has honestly made this one of the hardest albums I've had to review in a long time — an awesome challenge.

Thinking about A Fifth and this review has led to a top five wish list for the album. I wish:

Yeah, that sums it up quite nicely.

I've remarked in the past how I'm an advocate for groups creating and performing their own arrangements; there's something a little more authentic about their artistic achievement then. But man, when you have the opportunity to perform some of the work that Mr. Anderson is able to churn out, you have to go for it. I've never heard And So It Goes as a solo, and Anderson's treatment on the album re-energizes the choral standard into something a little more fresh and exciting; my knee-jerk reaction to the Billy Joel classic being listed in the liner notes was quelled as soon as the first phrases emerged. The structure of Sing a Song completely captures the spirit of the original, and the guys are pretty brilliant in performing it. The work Anderson did to breathe life into the three original songs Afloat, The Moment (I Got Lost), and Lighthouse puts him in a league above most of the others in the field.

Speaking of those originals: it's time, it's time, it's time. I know I sound like a broken record, but even if it's just a retrospective of their past work, On the Rocks should have no problem releasing an album of originals. Some collegiate (and semi-professional) group members go through their entire tenure as performers without ever performing an original song. OTR regularly delivers two to three amazing new works per album. That's to be envied and exalted.

And what's to be really lauded is the joyous sound that comes out of each track. In all seriousness, it's like a ray of sunshine exploded from the speakers every few beats. Even at my moodiest points, a couple of these songs will lift my spirits and make me forget my troubles. Can you ask any more from the music you enjoy? As a producer, Hollens instills a sense of exuberance in the vocal performance of the members of the group. That's not something easily manufactured with production wizardry and magic. Though Bill Hare and Tat Tong do a thoroughly engaging job with the tracks they've mastered, I'm sure their work was made easier by the fact that the fellows sing with ample emotion, whether laying the background or sizzling on a solo.

There are no bad songs on the album, even though I hated listening to some of them more than once. Bad Romance became played-out shortly after it became a YouTube sensation and a The Sing Off hit, while i 2 i and Listen to the Music are a bit too twee and earnest. And by the end of the album, some of the luster of the sunshine begins to wear thin. But for each of those tracks, OTR delivers Sing a Song, Helplessly Hoping, and the three originals, which are simply amazing.

And in a group of amazing singers, Rexius stands out as one of the best. His song Afloat sails above the others. He's definitely one to watch out for.

If you love On the Rocks, you have to own A Fifth. While not a perfect album, it's definitely a star turn for a cappella.

If you have an Internet connection, you're probably one of nearly three million people (as of this writing) who've watched the video for On the Rocks' cover of Lady Gaga's Bad Romance. (If you haven't seen it, follow this link. Go ahead; I'll wait.) The good news is that that arrangement still sounds great on A Fifth, which means that these guys didn't just rely on gimmicks and fun choreography. The (slightly) bad news is that if you're expecting a disc full of such cutting-edge, high-energy, contemporary pop songs, you'll have to look elsewhere.

First, though, Bad Romance: there's so much energy and fun in this arrangement, and these guys absolutely nail it. I'm not in love with the Poker Facesnippet, but it fits; still, more impressively, these guys just know how to build a rich, full arrangement that doesn't sound busy. The "walk, walk, fashion baby" segment is so intricately layered that it conveys a rumbling tension without sounding chaotic, and the whole song just flows and sounds great.

The rest of A Fifth is more of the same high-quality, well-executed arrangements; the only difference is that most of the rest of the songs are older or more downtempo tunes. That's hardly a complaint, though: their version of Earth, Wind & Fire's Sing a Song is crisply precise; their take on Brad Paisley's Then drips with emotion; and their cover of CSNY's Helplessly Hoping just shimmers (sorry, Gaga: this song is the standout on this album).

What's great about On the Rocks and A Fifth is that everything these guys do, they do well: We Don't Eat is a collaboration with all-female group Divisi that is flawless. There are three (THREE!) originals on this album that stand up beautifully next to the covers here (seriously: these do not sound like the compositions of college kids). There's no doubt that the group's consistency of sound and aesthetic has a lot to do with its sources for arrangements: ten of these songs were arranged by the mighty Tom Anderson. Still, these guys execute them stunningly. It might be nice to hear a little more breadth of dynamics (and some of the syllables on And So It Goes are a little distracting), but ultimately, these guys have delivered a solid, stunningly-executed collection of songs.

You can order a physical copy of "A Fifth" through On the Rocks' website or a digital copy through the iTunes store.