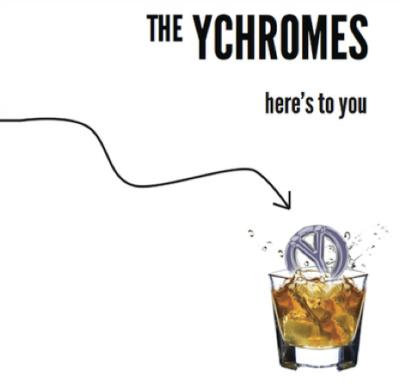 Add the YChromes to the ever-growing list of decent, non-descript male collegiate a cappella. Most of this album is good; almost none of it is great. Tuning and timing are impeccable, sometimes overly so. This is what a yearbook album sounds like in 2011. Fine news for YChromes fans, but a snoozer for the rest of us.

Let's start with the biggest issue: creativity (or lack thereof). The track list is rife with contemporary standards (Use Me, Kiss From a Rose, I'm Yours), tunes you could go see most male groups do on any campus anywhere. This would be fine if the YChromes brought anything innovative to them on record, but these versions are much like ones you've heard before. The group's super-repetitive arranging style turns familiar songs into easily ignored background music (with one notable exception: the Hyannis Sound-y Free Fallin'). Sure, everything is technically well sung, but that's pretty much standard now.

All of this would have been more enjoyable, or at least somewhat forgivable, if the guys had brought more emotion and energy to the table! Ed Boyer and Danny Ozment both try mightily from the mixing board to add vitality to the music, but the limp, raw vocals thwart them at every turn. Take the climactic moments (of which there are many) in Kiss From a Rose. There should be a huge contrast between the mellow verses and these big sweeping choruses. I just don't hear it — everything seems pretty much at the same levels of dynamics and emotional intensity.

I have to address the hidden track here as well. The guys chose to close the album with a heartfelt rendition of John Legend's It Don't Have to Change, dedicated to an alum of the group who recently passed. This very sweet gesture is followed by eight minutes of silence, and then an (inexplicably) not a cappella dance track in which the guys autotune sing-rap about ... something. I honestly couldn't understand half of the words.

Guys, what were you doing? This kind of track feels so out of place, and takes away from what was an otherwise heartfelt ending to your album. Next time, if you want to make something like this, just email it around to the group. The rest of us don't get it and don't want to hear it.

I wish I had more positive things to say about this album. It's really not bad, but the material here is so tired that others who have done it better easily eclipse the things that are good. The YChromes don't sound untalented, they just sound unfocused and lacking in a clear vision for the studio.

To this group (and the many others like them), I recommend doing some research on other similar groups. Usually I recommend listening to the best (as a rule, all groups interested in making waves on record should listen to every album nominated for a CARA in the previous year in categories for which they are eligible), but I have a new recommendation: listen to some of the "middle of the pack" groups too, and aim to do at least a few things better than them! If the YChromes can do this, I think it will help immeasurably toward crafting future albums with more vision and creativity.

The biggest knock on most of Here's To You, particularly for someone who listens to a lot of a cappella, is that it feels boring in both its composition and its execution. A lot of the repertoire is the same songs everyone else is doing or has done — Jay Sean's Down, for instance, or the three-track run of Kiss From a Rose, Home, and I'm Yours. When listening to renditions of these (or any) songs these days, I listen for what a group brings to them, be that an interesting arrangement, a compelling solo, or just a sense that the group has somehow taken ownership of the song. And yet, while everything on this album is reasonably sung and generally well produced, there is only occasionally a notion of what makes the YChromes' rendition of any song different from the original, or from anybody else's.

The arrangements have lots of block chords and fairly simple rhythms, leaving almost all of the groove to the percussion, and that's usually not enough. The primary distinction of the YChromes' takes on My Love and Home is that they've taken a lot of the groove and grit out of songs for which those are defining qualities, rendering the tracks flat and toothless. The most interesting thing in either of these arrangements is the interpolation of Justin Timberlake's What Goes Around... Comes Around in the background of the former, but it doesn't really add anything.

The strengths of the album come when the YChromes are able to find their groove. Heartless actually has a stronger rhythmic feel than Kanye West's original. Credit goes to Chris Elder, responsible for both arrangement and percussion. Elder's arrangement has the most development of any on the album, a nice integration of Phil Collins' In The Air Tonight, and the most memorable moment: the group's building to a unison "aw, sh-t!". Clint Eastwood, while extremely repetitive, has a bit of texture at points through a nice use of open choral vowels, as well as an interesting percussion and vocal turntable performance by Parrish Washington and album producer Rob Corradi. Ryan Adams turns in nice rap performances on Clint Eastwood and My Love and also provides the solid backbeat behind the nicely atmospheric Use Me.

These guys seem to have some idea of how to handle soul and hip hop, but they need to let loose and have some more fun. For now, though Here's To You has a beat, I can't really dance to it.

In case you were wondering, the YChromes are an all-male a cappella group. The track list for Here's To You includes perennial guys' group standards like Use Me and Home, along with a few recent songs that have become all but annoyingly ubiquitous in a cappella of all genders. I was hoping this studio-produced debut would bring new material to the a cappella scene, and I'm left a bit disappointed.

I can't kick the feeling that I've heard all of this done before. A few of the tracks aren't as overdone as others, but they're exceptions rather than the rule. A notable one of these exceptions is Free Fallin', the YChromes' take on a John Mayer cover of the Tom Petty original. The arrangement, by Delaware Vocal Point and Hyannis Sound alumnus Alfredo Austin III, is interesting and textured, eschewing percussive sounds in favor of syllables beginning with "s" and "v" in keeping with the floaty mood of the song. I had the pleasure of seeing this arrangement performed this summer by Hyannis Sound, and while the YChromes' execution leaves something to be desired, the source material is easily the best on the album.

Otherwise, arrangements are mostly functional but not complex. Soloists aren't particularly impressive and again are mostly functional. I keep coming back to that word. This album functions. It doesn't wow or impress. The YChromes sing all the right notes at the right times but don't seem to have allowed for variation and emotion where it was absolutely necessary. The soloist on If I Ain't Got You is absolutely tearing it up while the backgrounds do nothing to assist him. Clint Eastwood is fun, but the backs seem likewise disconnected from the soloist's performance. It's stoner music with an attitude, and the only 'tude I'm getting from the backs is "am I done singing 'ooh' yet?"

An interjection: the final, unlisted track is terrible and is probably one of the main reasons I gave this album a "2", instead of a "3" for effort. Digital instruments and tuning software are the only performers on the track, and I'm pretty sure it's only on the album as an excuse for the YChromes to curse and say as many inappropriate things as possible over the instrumental version of Estelle's American Boy. Really, guys?

I would be remiss if I didn't also mention the disparity in the production. There's an experience gap between Ed Boyer and Danny Ozment which is evident when comparing their mixes. Since they often alternate one after another, the difference is made even more apparent. Particularly noticeable is the ambience on such tracks as Home, where the stomps and claps should drive the song but instead take a back seat to backs that aren't particularly interesting. Percussion is the most notable difference, with Ozment's kicks and snares sounding a bit too untouched for my tastes, enough that they don't punch through the mix.

I'm going to keep echoing the same sentiments I've had in my recent reviews until I hear a group do it differently. I want to hear a performance, not a bunch of singers singing. The arrangement on Free Fallin' is a performance in and of itself, and the YChromes almost had no choice but to sing it in a particular mood. Heartless was more a performance of the soloist and the basses than anything else, and the backups sort of got a pass on it. Everything else is just singing.

To order this album, please email the group (thechromes@gmail.com) or visit their website.