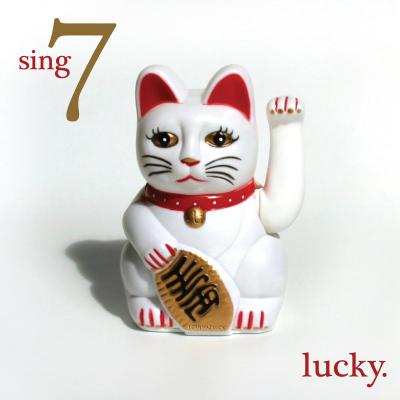 The overall quality of the Sing albums is no surprise: as has been mentioned in the reviews of just about every release in this series, these albums are an excellent combination of groups of all experience levels (high school, college, semi-pro, pro), home countries, and genres. The latest release, Sing 7, is no different. Thanks to the thoughtful ears of the CASA folks who selected the tracks for this compilation, the quality of the high school and college groups is so strong that you can barely tell the difference between those younger singers and the pro groups.

It's actually almost boring to write a review of the albums in this series. Hey, the House Jacks contributed an awesome song? No surprise there! Hey, it's not a compilation of the same old overdone covers? Woohoo!

There's so much that makes Sing 7 awesome and fun to listen to — tons of original songs (including from the college groups!), great leads, and interesting covers. And, as with previous editions of this series, Sing 7 is not just pop/rock a cappella: there's some vocal jazz (Cadence) and comedy (Six13), alongside foreign language a cappella (muSix). (Seriously, stop me if it sounds like I'm plagiarizing from my review of last year's Sing Six.)

I do, however, have two complaints about Sing 7. First, fact check! Tainted Love was not originally performed by the Pussycat Dolls, despite what the Elon Sweet Signatures list in the liner notes to its album Love Affair. That error is propagated here. (The song was originally recorded by soul singer Gloria Jones in the 1960s; the Sigs' version is based on the Pussycat Dolls' cover of Soft Cell's cover.)

Secondly, and perhaps more importantly to the repeat listenability of this compilation, the sequencing of this album feels jumpy. Sing 7 seems to switch between energetic tunes and mellower ones. In our MP3 generation, the ability to create a smoothly-flowing mix is a dying art, and many people listen to compilations on "shuffle" anyway, which certainly solves the problem. Still, I hoped for an album that would take me on a smooth journey when I first played it, and instead, this felt a little disjointed.

Those are two fairly minor (and, in the case of the second, easily correctable by the listener) complaints for a compilation that's this diverse and is this high caliber. If you're an a cappella aficionado, you may have all of the original CDs from which these tracks came. If not, there's almost certainly something new and awesome for you to discover here.

The thing I love most about the Sing series is that it does precisely what we do here at RARB. It is the only a cappella compilation that combines high school, collegiate, post-collegiate, and professional groups together on equal footing, and as such it doesn't have the same sound profile as a BOCA or a Voices Only. And these days, I am happy to say, it's getting harder and harder to tell the amateurs from the pros.

For starters, every group on this album from The House Jacks to the Cary-Grove Jazz Choir is innovative. The UCLA ScatterTones add a wonderfully edgy bite to Stevie Wonder's Higher Ground, and soloist Taylor Fugit isn't trying to sound like anyone except Taylor Fugit. Nick Girard of Overboard turns in a soaring, revelatory arrangement of Hello Goodbye (one of many from the group's excellent Beatles concept album, Help!). The Elon Sweet Signatures put a fun feminine spin on Tainted Love by way of The Pussycat Dolls. And with its cover of Whipping Post, the NYU N'Harmonics take the Allman Brothers to places they never even dreamed existed. Each of these songs does something specific that makes it unique, and each song sounds like it belongs on this album.

There is no shortage of inspired original work here, either. We expect our pro groups to wow us with original songs, and they do deliver in that department. Even more encouraging are the four scholastic originals, all of which deserved their nominations for CARAs. The Quickest Road could be a lost track from '60s-era doo-wop or '70s-era Stevie Wonder, it's that good. My favorite, though, is definitely Boomerang. Elspeth Michaels has a sultry, smoky voice that pairs well with the narrative of her lyrics, and Chris Rishel's music and arrangement are unlike anything I've heard in collegiate a cappella. Someone give these two a record contract, stat.

We also get some exposure to groups that we might not get to hear otherwise. Of the pros we have muSix, an all-male quintet from Germany; and Six13, the Jewish group that has beome well known on YouTube for its parodies, of which Tefillin is a fine example. The Essentials is a group that I haven't heard much about, but after hearing Janet Turner's original Reality, I want to know a lot more.

More than anything else, the Sing series reminds us that there is life, and lots of it, outside of collegiate a cappella. If Sing 7 represents the state of our a cappella union, we are doing very well indeed.

What's there to say about the Sing series, besides that I'm glad it exists? The series has always showcased the exciting, the cutting-edge, the real stars of the a cappella world. It's a great way to get a novice hooked on contemporary a cappella, and a great way to bring attention to some absolutely fantastic groups. Sing 7 is another seminal addition to the Sing canon; as a cappella only gets stronger, it stands to reason that anthologies will only increase in quality as well.

One of my favorite things about Sing 7 is that it doesn't just showcase cheery crowd-pleasers; the weird and the wacky are well represented on the album. Being somewhat weird and wacky myself, I really appreciate this. Joanna Goldsmith's (The Swingle Singers) genre-bending cover of No More I Love You's evokes the spirit and style of Imogen Heap without coming off as simply derivative. I love The Chordials' agitated and sexy cover of Ramalama Bang Bang, with a great solo by Ariel Arbisser. Eisdame, by German group muSix, is pumping europop with an R&B infusion. Tefillin is a blast, humor a cappella at its clever and dorky best — honestly, the whole song is worth it to hear the groan-inducing "Mazel Tov!" in an I Gotta Feeling parody ... and it makes sense. I said it when I reviewed XIV Hours, the fantastic high school group, but darned if Emma Kimmel doesn't own Imogen Heap's Earth ... it's a truly impressive solo.

Any compilation is going to be hit-or-miss, but the misses here can hardly be called misses. I'm not entirely digging the girl-power cover of Tainted Love, even with excellent production and a spirited performance from the group. While I fully appreciate college groups writing originals, I was not blown away by The Duke Men's earnest original The Quickest Road. UCLA's ScatterTones didn't capture either the essence of the Stevie Wonder original with its cover of Higher Ground, nor did the group approach the hard-rocking spirit of the Chili Peppers cover — it's an interpretation caught between two worlds. And speaking of worlds, Bon Iver's Woods is given a limp interpretation from the talented high schoolers at Cary-Grove High School.

But like I said, I'm glad this series exists. It's a worthy purchase, and I really think the overall quality of Sing 7 exceeds the quality previous compilations. CASA should be commended for providing such an excellent service to the community — it's samplers like these that really show the full diversity of the a cappella community.

This album may be purchased at CASA festivals or any online marketplace.