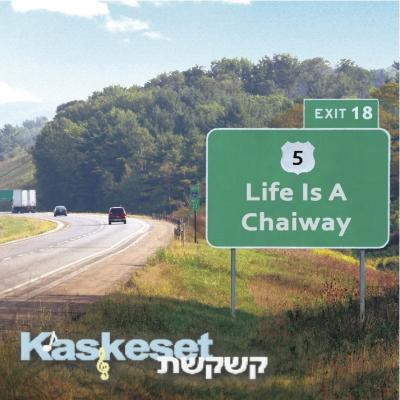 Life is a — ready for it? — chchchChaiway. A friendly phonetic gag that sets this album on its somewhat cartoonish merry way. Many of the voices on this disc sound like Muppets or high-school drama stereotypes. The diction, the fast vibrato, the focused, overtone-free timbres. It's a sound that means well and wants you to like it.

As a result, this is a friends-and-family disc that an outsider could feel good about buying, without committing to listening to it. The songs are mostly pleasant. The singing is mostly fine, and thoughtfully put together and rehearsed. Tuning is ok most places, with a few songs that can't quite pull themselves together; I got the sense they sound ok in person and the group was making the best of what they had for the recording.

Three songs are worth downloading, for the mix-n-match crowd: Lesham, Cold Cry, and Adoshem Li. Two pop songs and a hymn, all with good tunes and good performances. Lesham's Dori Gelb has a warm and friendly tone that elevates her song over most of the others. Cold Cry is well sung and quite catchy, with a fun Middle Eastern dance club vibe. And Adoshem Li is beautiful, in a collegiate choir performance that, if not perfect, is charming and beautiful and worth savoring.

As for the rest of the album — I wish it well and won't be back. Higher and Higher was a particularly tough listen, done up with a Ben Harper-lispy-percussion-heavy arrangement and a really silly solo. You'll Be in My Heart was a well-intentioned mush. And a few other songs — Balagan, Tutim, even the round-robin Kol Hamispalel — were ok but not something I'd return to.

Kaskeset made a nice album here. I just don't think it will appeal to anyone who's not already part of the group's circle.

Kaskeset's Life is a Chaiway is an obvious play on the world's most widely known Hebrew word, "chai", meaning "life", and the Tom Cochrane song, covered by Rascal Flatts and appropriated by Disney's animated hit Cars. I both smiled and grew worried at the thought of an album's worth of similar cleverness.

Kaskeset is (SUNY) Binghamton University's Jewish a cappella group, and they deliver a lot more than puns. In 2010 Kaskeset became the first Jewish contemporary group in the world to advance to the semifinals of the International Championship of Collegiate A Cappella and they hold a CARA (Contemporary A Cappella Recording Award) for the group's recording of Mima'amakim. Kaskeset's latest is a collection of Hebrew and English language songs that ranges from the exotic (Balagan) to the mundane (You'll Be in My Heart).

Kaskeset may rank in the average range, but this album is a more interesting listen than most, simply due to the nature of songs the group chose. Translations are provided for songs in Hebrew. In fact, the liner notes provide a wealth of information for which the listener is grateful: composer, original recording artist, arranger, soloist, editor, mixer, lyrics, translation, additional editing, recording, mastering, production, graphic design, photos, and thanks. It would have been even better if all the information was complete and accurate (Higher and Higher being properly titled (Your Love Keeps Lifting Me) Higher and Higher and apparently composed by Davis, Miner, Jackson and Smith, not simply "G. Jackson"). However, merely attempting to credit the composer places Kaskeset above most collegiate groups, and for that, they deserve kudos.

The group tends toward the mellow, but when its scale forms turn to the east and the tempos get going, Kaskeset creates a captivating sound. The opener, Balagan, boasts an arrangement filled with energy and a lead singer that can carry both the song and the style. This is the track to grab.

Sadly, listeners may find that the cohesive power in the first track is never quite repeated. But there are nonetheless moments that shine in many of the tracks — the descant in Lesham; the rock baritone's tone color in Cold Cry; the alto lead's tone in Emtza Halilah Bak'far; the adorable "oy oy oy" in Kol Hamispalel. The rising competition in the field of a cappella demands more from the group. We often find ourselves in the middle of arrangements that give us an unchanging sense of fullness. That combined with just a hair too much reverb leave the listener longing for moments of silence, moments where we can want something from the music. Without this, it becomes difficult to grow emotionally attached.

Kaskeset has all the pieces. Like gems in need of a good sonic wash and a brilliant setting, Kaskeset's talents are ones we can expect to see shine in the future.

When last we left our intrepid MOT of Binghamton (that's "Members of the Tribe" for the uninitiated) in 2008, they were relying on alum Mike Boxer for their best material, while otherwise featuring somewhat lackluster arrangements, songs that went on a bit too long, and soloists that weren't always ideally suited to their material.

Flash forward to 2011 and the group has lessened its reliance on Boxer's arrangements (only two here), but the arrangements and the soloists are still the group's primary weaknesses and they are glaring at times.

To be fair, the opening three tracks are most encouraging. Though there is a palpable lack of development in the arrangement of each song — hear one verse-chorus, you've pretty much heard them all — and each one feels like it's just missing one more layer or texture that would make it a more fully-realized, interesting interpretation, these are enjoyable takes on enjoyable songs that are certainly good, even if not spectacular.

Then the album hits a noticeable lull beginning with the Naomi Shemer classic Yerushalayim Shel Zahav, re-worked from the traditional, slow straight-ahead 3/4 into what I believe is an attempt at 6/8 — for reasons that mystify me. Mind you, I have no problem with an arranger playing with time signatures — I've heard both Summertime and My Favorite Things re-imagined in 5/4 and loved them — but there's absolutely nothing else new being done to this classic song besides that change. What's worse, it's an utterly workmanlike arrangement with absolutely no harmonic inventiveness or dynamic variation whatsoever, rendering it completely lifeless rather than the heartstring-pulling, romantic, patriotic anthem it should be. Dynamics, by the way — or better stated: the complete absence of varied dynamics — are a HUGE problem on this release, which plants its feet staunchly in the land of mezzo forte and rarely moves.

From there on, there aren't really any highlights to speak of. Boxer's arrangement of an incessantly repetitive song like Jerusalem does the trick, but the soloist has a quirky, nervous quality when it needs to be a powerful, confident voice that can wail when needed. You'll Be in My Heart is a headscratcher and sounds remarkably like a karaoke version of the original, both in the tentativeness of its soloist and the blandness of the arrangement. Emtza Halilah Bak'far is devoid of any of the mystique, the danger, and the loneliness of the original, and it is further compromised by a female soloist that is at odds with the definitively male viewpoint (both the perspective and the grammar) of the original. Yesh Bi Od Koach is an intriguing song and thus, even in a very straightforward, literal arrangement, it fares better than most. Kol Hamispalel (or "Kol Hamitpalel" as the ladies sing, the song title notwithstanding) is a boring song to begin with, originally performed by an Orthodox all-boys choir, so one wonders why this was the song that was chosen to showcase the women of the group — perhaps it's an attempt at irony, though I just found it humorous bordering on laughable. Tutim is another serviceable arrangement that had my mind wandering after the first minute or two. And Adoshem Li is a lovely if somewhat simple choral arrangement that, while adequately performed, seems totally out of place on this album.

Thankfully, Chaiway finishes up strongly with a borrowed arrangement of Higher and Higher (from the Boston group formerly known as Downtown Crossing, now known as "Funkin' A!") — a classic case of energy elevating a simple arrangement to something better than what it looks like on paper. Still, with far more than Downtown Crossing's six members, you kinda wish Kaskeset had found a way to expand on the original. And as a closer we get Yihye Tov in an arrangement by Boxer that does a lovely job playing with different feels, from an opening that's pushing and/or straddling the barline, to an arpeggiated rhythm, to a more straight-ahead feel, to a half-time feel towards the end. It's a tad long at six minutes plus, but it's at least interesting most of the time.

And thus I end another Kaskeset review feeling unsatisfied. Perhaps a bit more than last time, which is a particular disappointment. In the Jewish a cappella world, these guys are still better than most of what's out there on a collegiate level. But in the larger a cappella world, they still have quite a ways to go.

To order this album, visit iTunes or contact the Hillel Office at Binghamton by emailing binghillel@gmail.com or calling 607-777-3424