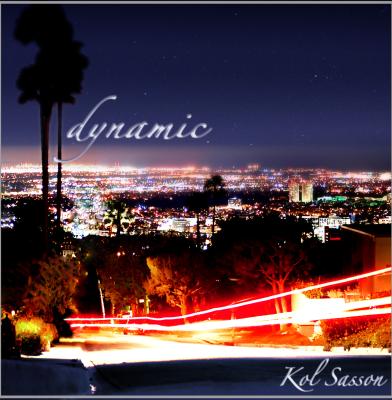 In terms of overall sound, Dynamic is more or less in the same sonic headspace at its predecessor, Rinse and Repeat. As it has in the past, Kol Sasson strikes me as a solid group of musicians who sing well and have some fun together. In other words, an average college group. Although they previously ascended to the category of "well-produced group", Dynamic doesn't live up to its namesake. On the contrary, it sounds as though this group has reached a plateau of sorts with its sound. An injection of something fresh and new is what Kol Sasson needs now.

I feel as though this review is as much a comment on The Vocal Company's production work as it is on the group itself, as its hand in the proceedings is probably the most significant change since Rinse and Repeat. The treatment of the upper voices is nice, clean, and pleasant. Use of effects is generally appropriate and interesting, such as the neat little pulsing effect in Esah Einai. The only thing that really sticks out to me consistently is the tone of the bass sound, which often just has a bit too much edge for the style and consequently sticks out a bit. Case in point, the bass treatment on Wild at Heart makes the guys sound thin and nasal, rather than resonant and supportive.

A nice exception to this though is Hometown Glory. Very pretty upper voices, great solo, and a gritty bass sound that I think was designed to imitate a cello. I didn't love it at first, but it grew on me over subsequent listens, and I certainly respect and enjoy the idea!

With the production established as solidly "good", one might ask what Kol Sasson brings to the table. The basics, really. The group sings well, its arrangements work, and the energy is about what you might expect. The repertoire is more focused than last time around (with the overly enthusiastic Don't Stop Me Now being the only real stylistic black sheep). The tone of the set list is reflective, with many of the English songs dealing with themes of the passage of time (the aforementioned Hometown Glory, Time, and Wild at Heart). That's as good a connector as any — I'll take it.

So what are we left with in the final analysis? Lots of "good", very little "great", and not much we haven't heard before from this group and others. Kol Sasson has proven that they can make a competent album, now I want to hear this group make a definitive one. Even more focus on the cohesion of the set list and maybe cutting two-three songs to just bring the absolute best of the best would be a good place to start.

Kol Sasson is a mixed a cappella group from the University of Maryland with about fifteen current singers. Dynamic is one of those albums I would really have loved to love, but unfortunately don't. About half of the songs on the album are sung in English, the other half in Hebrew. Although I likely would have enjoyed the album more if I spoke Hebrew, most of my lack of enjoyment about the album came from the music rather than the lyrics.

Language choices aside, the album contains an odd mixture of songs. The opening track, Esah Einai, with dual English/Hebrew words ("My help will come from God" in English), is overtly religious. The other English tracks are quite secular, ranging from Gloriana's Wild at Heart to Hootie & the Blowfish's Time. I'm not sure about the religious vs. secular nature of the Hebrew songs.

One of my biggest complaints has to do with the soloists. Many of them have quite harsh voices. In two cases the harshness of the soloist's voice was enough to be the major factor in me rating the track a '2' (Don't Stop Me Now, and Time). My other big complaint is about the production. The album simply sounds muddy. At one point I thought it might be my speakers, so I put on another album which I recently reviewed (by the Touchtones), and discovered crisp vocals again — soloists, backups, vp, you name it. Unfortunately this album simply lacks any of the vocal punch of that album. And in a few places the mixing doesn't seem quite right — the soloist for Tohavi K'tzat Et Atzmech is too quiet and the soloist for Don't Stop Me Now has a substantially different reverb than the backups, for example.

Dynamic has a few nice moments that I haven't mentioned, like an interesting grandfather clock chime opening to Time, a nice female soloist in Tohavi K'tzat Et Atzmech who navigates changes between upper and lower registers with complete grace, and a very catchy melody in Esah Einai. However, much as I want to like the album, in the end the flaws are just too large and I cannot recommend it as any sort of "must have".

The University of Maryland's Kol Sasson has put out a very promising if not awe-inspiring album. Kol Sasson has the capacity to be a breakout group at its school, but while its potential is practically boiling over, the group's execution here is a bit undercooked.

There are pleasant surprises on Dynamic. By and large, most Jewish a cappella I've listened to and reviewed has been, with little exception, sung distractingly nasally. While overly nasal placement makes a few appearances in backs and leads here, it is nowhere near as pervasive as on many albums from Binghamton's Kaskeset, or Brandeis' Manginah. In fact, much of the background singing is technically excellent, particularly the basses. The string contrabass is stellar on Hometown Glory, and some nice rumbly low Cs make appearances on At Ba'a Elai.

Another enjoyable constant through most of the album is the background singers' energy level. Kol Sasson's arrangements are almost all sung with unfaltering commitment. This is usually a good thing, but overgeneralization of emotion leads to some of the tracks sounding a bit bland. Im Eshkachech and Avir LinShima just emote a vague "happy" or "sad", and others an even more troubling "generally intense" feeling that glosses over whatever the actual intent of the songs may be. Imagine receiving a plate of chicken parmesan where the red, tangy sauce it is covered in tasted only reminiscent of "vegetables". That's the unfortunate taste left by a sizable chunk of the album.

What's being sung isn't particularly great either. Opener Esah Einai is nicely ambient and a good introduction to the group but at the same time the first thing you hear come out of Kol Sasson's mouths is a big, wet, dipthongy "JOW!" Aside from this and other occasional distracting syllable choices, the arrangements are for the most part uninteresting, comprising mainly "ah"s, "ooh"s, "oh"s, and little else. Alternately, other songs such as Tohavi K'tzat Et Atzmech have parts on "gin" and "gung" that are sung with such utilitarianism that it saps all the interest out of what was once an innovative choice of syllable.

Solos are hit or miss, some being spot on and others either lacking emotion or evoking the same indistinct positive or negative vibes as the backgrounds. The latter situation leads to them being forgettable, while the former are the only things on this album that really stick out as memorable. Samantha Riter's Hometown Glory is reminiscent of Adele's original, but is skillfully translated to work in her voice. While Riter's warmth doesn't quite match Adele's, her vocal agility matches up admirably. Likewise excellent is Samantha Gottlieb's low, rich solo on Avir LinShima, lifting the song above the lukewarm backing block.

The lead on Time is a good way of segueing into a discussion of album composition. While I'm sure the group enjoyed the song, the lead vocal comes across as robotic and monotone and pales in comparison to even the least impressive of the other leads on this album. Likewise, many of the tracks in the middle of the album are not bad, but don't add anything to the album. Interestingly, it's often the English tracks that sound half-baked, as if Kol Sasson knew they needed to throw a little more work behind songs in a foreign language. I, and producer The Vocal Company as well if I may assume, would have much preferred Kol Sasson to have spent just as much time as they did on Dynamic on an album of fewer tracks, allowing each song to receive more focused attention.

Dynamic is great for Kol Sasson's regular fans, friends, family, and people visiting UMD's Hillel center. However, as a competitive product, it falls smack dab in average territory. Looking back at Kol Sasson's previous releases and reviews, it seems that instead of trying to get ahead of the curve, they've moseyed along in the middle of the road. For the group's next release, it would be fine if they simply stay the course, but I'd love to see Kol Sasson take a leap forward and make an album with more substance, less filler, and a little more forethought.