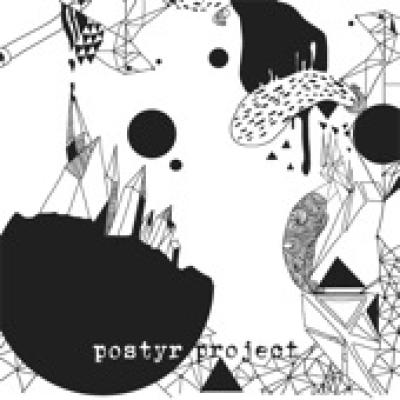 Wow. Albums like this remind me of why I give "5"s in the innovation/creativity category only sparingly: if I gave out more "5"s, then this one would have to be rated a "6". Postyr Project is unlike anything I've heard before, and anyone who is a fan of a cappella music but who has gotten a little tired of the same old, same old should immediately purchase this album.

Postyr Project is the work of a new group by the same name, a five-member group from Denmark founded in October, 2009. The group has three male singers and two females. The males provide bass, vp, and occasional leads. The females provide occasional leads and ethereal textures. Textures are something the group does remarkably well: many of the tracks evoke emotional responses through layers of sounds rather than melodies (although the melodies are good, too). The arrangements are fascinating. All but one of the songs were written by group members. The overall effort is comparable to the best European a cappella I've heard, and that's saying something! Due to the group's unique style, I have been unable to think of too many similar groups for comparison, but if you can somehow imagine a mixture of The Real Group, Enya, Bob Dylan, and Mister Tim, you might not be too far from the mark.

Most of the songs on the album are in English, and despite its strangeness I found the album surprisingly accessible. After listening to the album several times, I went to the group's website and found this blurb, which I think expresses things fairly well and gives you a sense of their musical goals: "the five friends decided to take their passion for the fragility of American singer-songwriters, the edge of electronic music and the evocative soundscapes of avantgarde pop to the next level."

A few of the songs are done with instruments, including a cello in two tracks and a guitar in one. The cellist (Johanne Andersson) was acknowledged, the guitarist not, so perhaps the guitar was really a processed voice. One of the songs (A Wave) uses what I believed was an actual drum kit until I read that it was vp. The guitar track (Walking) is phenomenal, my favorite of the album. It stands up well against any indie acoustic music out there today. The final two tracks of the album are remixes. The first one (Go! Don't Stop!) falls short of the mark: very disjointed, without most of the background textures, and I just don't see the point of it. The second one, however (Elpa (Breath)) is even better than the original — tons more bass and raw energy — and is my second favorite track. It should be in serious contention for the best professional original song CARA award.

Finally, for those wondering about my "1" rating for OMG: I generally reserve a "1" rating for songs that are so awful that I can't bear to finish listening to them. Or at least, if I do finish, it's painful and only out of a reviewing obligation. In this case the pain came from the repeated use of the f word. Perhaps Postyr Project doesn't realize how offensive this word is to many native English speakers (such as myself, apparently), but the repeated use of the f word really turned me off. Without the profanity I would have rated it a "3" or "4". However, I love living in the digital world, and only rarely use actual CDs. So, I'll just delete that particular mp3 file from my digital album, and will undoubtedly be listening to Postyr Project for many years to come.

I'm going to be honest here, it took me a really long time to figure out how to review this album. There's a lot on here that isn't a cappella or even vocal music in the traditional sense. I was perplexed, stumped. Then I figured it out. I was keeping myself in a box that the genre has created for itself. So instead of reviewing Postyr Project as an a cappella album, I am going to simply review it as an album.

First off, this album is incredible. Nuanced, really well composed music is the norm, so much so that when a song is merely good, you find yourself taken aback. You also find yourself surprised, usually pleasantly, at Postyr Project's choices of instrumentation, be they purely vocal, processed voice, or even — yes, here we go — acoustic instruments or a rock kit. I, frankly, don't care what you use to create a sound, so long as the end result is both what you're looking for and what sounds good. Good is, of course, subjective, but I think for the most part Postyr Project has a really excellent sense of what works both musically and sonically.

The middle section of the album is where it really shines, and Postyr Project shows skill at blending the vocal with the instrumental, to the point that you're not sure what you're hearing anymore, nor do you care. In Vernalis, a track also included on Sing 8, is a masterpiece. It blurs the lines so hard that I find myself going back to Ruled by Secrecy on UCLA Bruin Harmony's No More Bets in an attempt to detangle the knot of perception that In Vernalis creates. Next is Elpa (Breath), another standout with excellent atmosphere. Until the voiceover enters, I found myself comparing the song to JT's Cry Me A River, except with more sex (if that's possible). Then this haunting, just-barely-too-close-to-the-mike voice enters, and you immediately get the chills. It's equal parts uncomfortable and ensnaring.

I'm not sure how much further I could extol the atmosphere of the album before I sound like a broken record. With little effort, it seems, every song on Postyr Project puts you in a very specific, defined, and unwavering mood — that is, except in cases where the mood is made to shift, as I mentioned before regarding Elpa (Breath). It's breathtaking (pun intended) and you would be remiss not to go pick this up. Like, right now. Go! (Don't stop!)

I have a weakness for the weird and the wacky. A woman juggling shaved Cornish game hens? Absolutely! A Bach-style chorale re-imagining of the collected works of Katy Perry? Bring it on! So with this mindset, I went into the experimental and exploratory debut album from Postyr Project. While I appreciated the ambition and emotional content of the album, I felt that overall it was burdened by its own scope.

One of the best pieces of advice I've ever been given in life is "figure out what you're setting out to accomplish, and then accomplish it". It seems simple, but so often we get bogged down in trying to accomplish three hundred things when our energies could be better spent focusing on just a few. In reviewing music, I often think of this maxim: is the album accomplishing what it set out to accomplish? In the case of Postyr Project, I'm not sure if it has.

The album is really two albums; one is a series of well-executed original pop tunes, and the other is a more experimental electro-a cappella album. Both albums are good, full of sophisticated harmonic language and powerful vocal lines. But Postyr Project's cohesive vision is never really felt when listening to the album — it feels more like a grab bag of studio tomfoolery than a unified musical vision. When you hear a Cadence song, you recognize it's Cadence. When you hear a Pust song, you recognize it's Pust. I don't think I could ever identify a Postyr Project song, because I have no idea what a Postyr Project song sounds like. Of course, no group should release an album filled with identical songs, but Postyr Project is so all over the map that even writing a 500-word review about it seems like a gargantuan task.

Postyr Project can write some catchy pop tunes — songs like RunRunRun and Go! Don't Stop! are addictive power-pop that wouldn't sound out of place on any dance floor. OMG (which is unfortunately named) is a power ballad with a very cool groove behind it. Walking is a charming acoustic folk jam. The songwriting, to paraphrase a line from The Big Lebowski, is not the issue here.

And on the other hand, Postyr Project can get weird. Elpa (Breath) is bolstered by a trip-hop beat and has a showcase spoken-word solo. In Vernalis is a Nordic folk journey set to an electronic soundscape. Interlude is, uh, a cello solo. It's all very interesting, of course, and I admire Postyr Project's willingness to put itself out there. But these moments, weird and wonderful as they may be, don't give the album a signature sound. If anything, they become inconsequential oddities placed in a modern pop album.

The singers of Postyr Project have taken great pains to integrate studio manipulation into their core sound. Even less experimental songs like Go! Don't Stop! make heavy use of pitch correction and interesting equalization effects. The results are a bit of a mixed bag; while the vocal percussion is usually top-notch and the mixing avoids muddiness, the studio meddling often gets in the way of the raw power of the vocals. The rare moments in which soloists get to really wail seem all the more potent when paired against the curiously compressed sound the permeates throughout so much of the album.

If I sound down on Postyr Project, it's that I'm a little disappointed at what I view as its wasted potential. There is so much musicality, so much originality at work here. The problem is, this musicality and originality has manifested itself as undercooked and disorganized. What could have been a stellar album has slid in as being solidly average, an ambitious but flawed piece of work.

To order this album, visit the group's online store or iTunes.