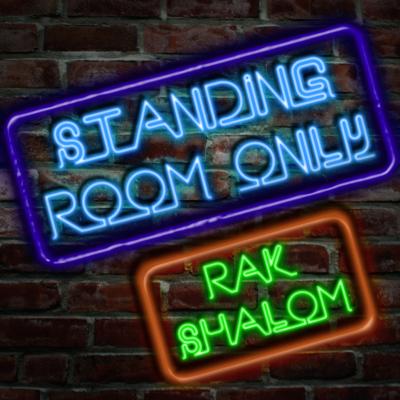 As the group did on its last album (Caution: Extremely Hot), Rak Shalom touts its "truly unique and diverse repertoire" in the liner notes, which you may be forgiven for believing if you've never listened to another collegiate Jewish group. If you have, then you know that this mix of Israeli and American pop with traditional Jewish melodies is par for the course. In the absence of bringing anything new to the table, all that's left to recommend is the group's sound: it's OK, made slightly-better-than-OK by good production. Overall, it doesn't grab me.

Sorry if this sounds cranky, but I'm tired of all these collegiate Jewish groups doing basically the same thing and trying to convince me that it's really original. The formula is to do both Hebrew and English popular music with some traditional Hebrew stuff thrown in for good measure. Pretty much every group of this type out there does exactly this with little deviation. The songs usually have very little in common beyond their general categorization as "pop", and often the English tunes are either really obscure or super overdone (this album is more the former).

My question is this: where's the Penn Masala of Jewish groups? For those unfamiliar with Penn Masala, it's a Hindi group from UPenn that likes to mash up Hindi music with English language pop tunes in ways that are often new, exciting, and engaging. Instead of simply having Hindi music and pop music side by side, they find ways to mix them and allow each to enhance the other. I have yet to hear a Jewish group blend styles so effectively, if at all, and I challenge Rak Shalom to be the group that does it.

How to go about it? I think the group is on the right track with its production and arrangements. Things sound clean and are presented well. There are a good handful of interesting rhythmic moments to be found (check the intro of Syndicate), and syllable choices are mostly straightforward and not distracting.

The major weakness from a purely musical standpoint is really the quality of the soloists. There's an unfortunate abundance of lame baritone tunes (in fact the first four songs of the album are all like this — fronted by unexciting, awkward baritone leads). The girls are a little better than the guys, but nobody is memorable. I hate giving that note to a college group, since I understand that many of these singers are amateurs in it for fun. Still, it really is the single biggest obstacle to my enjoyment of this album.

Honestly though, I would be much more forgiving of the soloists if the overall direction and construction of the album were more interesting. I'm picking on Rak Shalom because it makes a point of selling its repertoire as unique. It's not. In fact, it's a formula that has been done to death. It's time for a group in this sub-genre to step up and do it differently. Why not Rak Shalom?

Guys — my advice is to be more thoughtful about the music you select and how you put it together on the album. Can you find ways to blend the Hebrew and English language stuff in a way that makes sense and sounds cool? If you don't want to go that route, can you at least pick songs that complement one another on an album (ie, probably not Michael Buble and an Akon medley)? This album plays like all the others just like it — a weird, random, bilingual mix tape. If you can do something different, I'll be a fan for life!

Standing Room Only is unfortunately an album that leaves a lot to be desired. There aren't too many glaring errors, but there are also not too many high points. In short, it is lukewarm, and as such it's a notch below the typical a cappella album that comes my way these days.

About half the songs are sung in English, and about half are in Hebrew; I don't especially have a preference between the two. The arrangements are vanilla. Nothing on the entire album makes me sit up and take notice. There are no "what was that?" moments (neither for good nor for ill). The background parts nearly always seem to be plodding, which tends to drag the energy level down. Some of the songs have tuning issues; the worst offenders in that regard are What Hurts the Most, Sigapo, and Ana Bikoach.

In short, I find the album to be quite uninspiring. At its best the songs are adequate; at its worst the tuning issues make me wish some of the songs could end quickly. Not recommended.

I don't like to repeat myself, but there's not a lot I can say about Standing Room Only that I didn't already say about Rak Shalom's previous album Caution: Extremely Hot. The University of Maryland mixed Jewish a cappella group's latest album is still basically a yearbook album. The alternating between English and non-English songs still feels disjointed, the soloists are still decent but nothing special, and the inclusion of American pop songs is still perplexing (the album liner notes include a vague explanation that their repertoire "spans from American and Israeli pop to traditional Jewish melodies", but it's still unclear how these songs further the group's effort to be "one of the most dynamic groups in Jewish A Cappella").

The frustration with Standing Room Only is that it doesn't feel like there's been much growth for Rak Shalom. While Caution: Extremely Hot was still early on in the group's career (Rak Shalom was founded in 2005), the group now has three albums under its belt and should not still have these rough edges. The male/female harmonies are gratingly off (on Haven't Met You Yet and Ain't No Mountain High Enough), and weaker soloists really bring down some of these songs (What Hurts the Most is particularly monotonous). Arrangements aren't a strong suit either; Syndicate is busy and distracting, and the transitions between songs on Akon Medley aren't smooth at all.

Rak Shalom does have some moments that show promise. Opening track Tehilah Ledavid is solidly arranged and has a strong soloist, while They creates and builds on a haunting mood. Kama Peamim and Ana Bikoach both have some nice dynamic builds (I would've liked to see these pushed even further!). Overall, though, Standing Room Only is an average album by a group that advertises itself to be Jewish a cappella but has a repertoire here that's more than 50% of the same contemporary pop/rock songs that every other college group does. This is all well and good — groups can sing whatever they want to sing — but it just makes it even harder to see what makes Rak Shalom special.