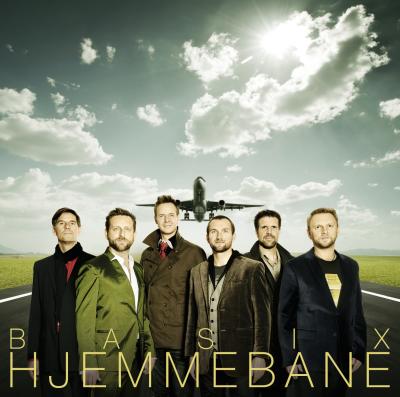 Basix is forever making strides as artists and musicians with each new album release. Hjemmebane is no different. After the success of the group's previous recording, the all-English double disc Diversity, the guys got together and decided to record an album entirely in their native Danish. And the album packs a huge punch, even if you don't understand a single word. The guys are masters at conveying emotion and meaning through melody, harmony and rhythm even more so than their original lyrics.

Basix is known for really powering up the danceable music; the song Diversity from the aforementioned album readily comes to mind. Here on Hjemmebane, Basix serves up the truly effervescent Sommersang, which is just the right soundtrack to a whimsy-filled day being wild and carefree. At any time of the year when you need a pick-me-up, this is the song that accomplishes it in no time. As well, the guys do not shy away from social and political messaging in their music — they include Think twice from Diversity as Tænk — "bitch" apparently translates into many languages.

Where the group really flourishes is in the mid-tempo to ballad range. A lot of groups up the tempo of their tracks to mask any blending, intonation and phrasing issues. Not so with Basix; they will mellow out a track so that you hear every vocal inflection and timbre change. It's a sexy-jazzy sound that plays on the ear like butterfly kisses. Examples include engaging Begynderballistik, the seductively atmospheric Flod, and super smooth Appetit.

Anders Ørsager must be the dirty bad boy of the group. And Niels Nørgaard must be his pimp. He can take a simple melody and infuse it with such sexiness that it comes across as much as an emotional and physical experience as simply an aural one. You catch glimpses of this power during the Nørgaard penned Begnderballistik as Ørsager slips and slides up and down the scale, finally culminating in his trademark high C. It's a great moment in a song filled with them. And Kom nu is a throwback rhythm and blues jam that makes you want to slow dance at a basement party. But those are just appetite whetting as the man truly comes alive and shows his flirtatious funk in Appetit, another track written by Nørgaard. What a dynamic duo. At the 2:50 mark in the track, Ørsager leads the group in an orgasm-inducing glissando that is not for the faint of heart. The moment is reminiscent (even to the specific time point in the track) of one of my favorite songs, As One off of Basix's coming-of-age album Embodiment.

And for those of you wondering, The Divinyls' cheeky reference goes here.

A few missteps present themselves on the album. Like sometimes initial breaths are left at the beginning of a track. I'm not sure if that's to remind the audience that humans are singing everything, or what. It is a choice — one that I'm not particularly fond of — but it doesn't detract from the overall enjoyment of the album. The group tends to lump slower songs together, which can cause lulls in otherwise energetic moments. Especially perplexing is the fact that Basix closed the disc with Skam which just fades out. So a slight disappointment. The song itself is excellent, but not as a closer. A translation could have helped here in case there is something important about the song that would make the decision to have it as the final track more apparent. And also, I'm upset that Toke Wulf doesn't have more solos. His is the silkiest bass lead that I've heard in a long time. His vocals have the range of a first tenor enmeshed with the buttery warmth of a baritone.

This album is not going to be for everyone, which is why the "Repeat listenability" score is only average. Most people will listen to it once or twice because it's really good, but not be able to get past the fact that they can't understand the lyrics. But if you are wondering what all the hype is about from the group's CARA 2012 win for Best European Album, pick up a copy of Hjemmebane and prepare to be enthralled.

Hjemmebane is an album of undeniably strong musicality. However, the question remains: is this music for you? Unlike previous Basix albums, this one contains nary a word of English. So, unless Danish is your native tongue, you're likely to be at a bit of a disadvantage to truly invest in the songs. Furthermore, if you have no love for old school arranging (a "jown" here, a "neer" there), you may well be tempted to dismiss Hjemmebane as corny. I would begrudge you neither of those qualms, but would encourage you not to overlook the many good things that Basix brings to the table. It may not be your cup of tea, but it's a pretty sophisticated brew!

At its core, the excellence of this album comes from a richness of sound. There is a fullness and deliberateness to every song that lets you know you're listening to pros. Of course there's an element of mix wizardry inherent in crafting that sound and for the record, while all the mixes are strong, I found Bill Hare's to be generally the cleanest and most free from sonic clutter. However, as we all know, no amount of mix magic can make gold of straw. The singing, both leads and backgrounds, is truly world class.

Now then, to the language issue. In the absence of being able to understand the narrative of each song, the hook becomes king. My favorite hook is that of Tænk, a bouncy, call-and-response pop confection. Everything else is relegated to varying degrees of memorable, but few songs really stick in my memory. Again, the language barrier presents a disadvantage there, but since pop is clearly Basix's predominant style I would hope to hear more hooks that really grab me and transcend the need for lyrical understanding. The writing just comes up a little short in this regard.

From an arranging standpoint, the group goes for a heavily textured, very a cappella-instrumental approach. There are lots of diphthongs, sharp consonants, and layers of distorted singing used to evoke real instruments. Everything is so well sung that it works more often than it would for a lesser group. Still, a "neer neer" guitar solo is going to take me out of the music every time, without fail, regardless of the quality of the voice generating it. This sort of a cappella sound is going out of fashion right now in favor of what I'll call the "Pentatonix" approach: voices just kicking butt as voices. Personally I still appreciate the old ways, but understand the gripes of those who do not.

So, is this music for you? If you're an avid pop fan who doesn't mind a some dated arranging choices and can appreciate the merits of really good singing, then Hjemmebane might be right up your alley (Danish skills a plus). If not, you may find some of Basix's older work more accessible.

Basix is an all-male pro sextet from Denmark, and I love the group's latest album, Hjemmebane. It is a stunningly-crafted and beautifully-executed collection of originals that I cannot stop listening to. At the risk of sounding like a cliche, after listening to Hjemmebane (which loosely translates to "home" or "at home") several times, I completely forgot that it was all-vocal. In the ongoing debate of "is a cappella a genre or is it a style?", Hjemmebane is a solid argument for "style": this is a beautiful album of pop songs — that just happens to not have any instruments on it.

There is so much that works well on this album. First, the arrangements are fantastic. One thing that impresses me is that these guys actually let the songs breathe a little bit, with spaces between the notes and small flourishes (especially Flod and Sommersang) to add interesting texture without distracting from the rest of the song.

In addition, the syllable choices are impeccable — and also simple. The bass line on Begynderballistik is a "dm", but it's such a non-literal "dm" that it actually sounds like the strings on a bass, no joke. That simplicity carries throughout the album: there are syllables in Aften that are so soft that it almost sounds as though they're humming. Rarely do these guys get crazier than an "ooh", "oh", or "dim", but their trick is that these syllables don't sound choral at all, so the album still sounds like a pop album.

Basix definitely has a signature sound, and it's a classy (and classic) one. There's nothing really flashy on this album: I've already talked about arrangements and syllables, but the production is clean and simple, the percussion is straightforward, and the songs themselves are all fairly traditionally-structured. There are no crazy diva moments on Hjemmebane, and that's actually a good thing. The flip side of this is that sometimes there's not enough diversity (of dynamics or of styles), so some of these songs start to blend together (2200 in particular feels a little monotonous). While I wish these guys had pushed their sound farther (quieter softs, louder louds, verses that build and grow to greater extremes), there's no denying that Basix delivers its signature sound flawlessly. That in and of itself makes Hjemmebane an awesome listen.

This album is available on iTunes. To order hard copies, visit the group's online store.