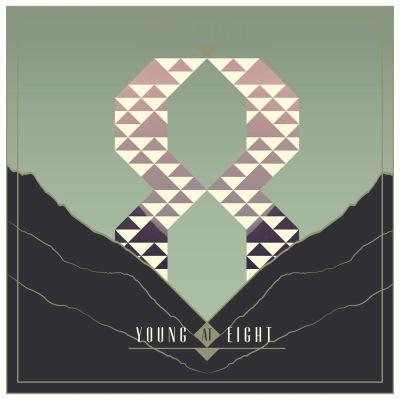 For anyone more than 30 years old, George Bernard Shaw's quote "Youth is wasted on the young" is a damning phrase that conjures up the foibles associated with those not yet competent enough to capitilize on their vitality and exuberance to create meaningful experiences. Nothing could be further from the truth when talking about the latest recording Young at Eight by Juxtaposition at Virginia Technical University. With eight albums under their belt during their 18 years of existence — get it, young at eight — the guys in Juxtaposition have done everything but waste their opportunity to create some fantastic a cappella tracks and recordings.

There is a pervasive buoyancy thoughout the album with crackling excitement on every track. You can feel the approach of the opening track Right Now until it fills the soundspace with this joyous sound. The block provides supportive background sounds without sacrificing too much creativity or interest for the singers in each of the sections. The rhythm section of basses and percussionists provides a strong foundation and engaging groove. And for those of you who appreciate the more natural sound with your a cappella, the boys never let you forget that these are voices singing.

The mixing and mastering have a definite in-your-face quality — making it an album to experience almost as much as it is one to listen to. Depending on the listening device this is either an amazing immersion experience or seemingly overwrought beast. I experienced both during the reviewing process alternating between "Wow, this is fantastic!" and "Good gosh, why are they so loud on every track?". Thankfully, the positive reaction won out.

Occassionally, the arrangements are too busy for their own good with auxillary lines that are more distracting than enhancing, and syllables that draw attention to themselves rather than propel the song forward. "Ba doot'n DWAAH doo" as the end phrase of Heaven is the most problematic in this regard. Also the backing vocal lines don't need to fall back on endlessly repeating the lyrics all the time. Even my favorite tracks like Right Now, Don't Let Me Fall, The City, and Way I Am utilized this crutch. Since there were a plethora of arrangers for the album (ten for the eleven tracks on the album), it's like each one of them deconstructed the previous arrangement and decided to recreate all of the elements of that track within the constraints of their song. The one piece of advice I'd give to the future arrangers would be to KISS each arrangement before recording the track. What lyrical repetition can you cut out and replace with simple syllables so that using the lyric tactic becomes more effective?

As a positive, Juxtaposition is the most authentic sounding group to tackle country music from the male perspective. Legend of McBride and Country Girl sound as if the songs were written for them.

Which leads to two comments about the liner notes. To get the negative out of the way, there are no licensing credits mentioned on the album. They do list the artist from which they've derived their arrangement, but I'm sure that Gabe Mann and the other members of The Rescues would appreciate that songwriter credit as well.

Nostalgia may be the reason behind why I love this album. Two paragraphs from Juxtaposition that are too long to reproduce here in their entirety struck a chord and made me appreciate this recording even more:

"We offer our music here as nostalgic yet forward-thinking snapshots of the experiences that we as young men have encountered, are currently working through, and will face in the not-so-distant future...When played on repeat...reminding us of the infinite relevance of these lessons we've learned and the music we've shared."

Great a cappella music — heck, great music in general — is about putting the pieces together: the solo, the instruments, the arrangement, and the production, in such a way as to create something meaningful, something intriguing, something interesting. Juxtaposition has managed to do precisely that on five songs on this album, five songs which would make a terrific EP. The rest of the album features weaker, less intricate arrangements and duller, less engaging solos.

Young at Eight is, at times, a very good album, with a few of the best collegiate tracks from the past year and some of the most thoughtful and creative production in recent years. The first four tracks are powerhouses, with convincing and compelling solos, layered and smart arrangements, invested singing from the background voices, and stellar production (more on that later). This is pretty impressive, considering the songs come from widely disparate genres (Van Halen to Gavin DeGraw to B.O.B.). It's difficult for any group to sustain such a high level of consistency and difficulty, and this is precisely where Young at Eight starts to drop off, never quite reaching the same heights until the campy final track, Muse's Uprising.

The intervening songs aren't necessarily bad, but the arrangements are thinner, and lack the texture, complexity, and dynamism of the other five tunes. My Heart With You sounds nice enough, but the song needs tension (like the dissonance in the original) and aching vulnerability, two characteristics which simply aren't there. The City has some interesting moments, but lacks the sultry soulfulness of the original. There's nothing wrong with reinventing a song if you've got a reason for your own spin, but there doesn't seem to be one here.

But enough about failures. Let's talk winning formulas. Bryson Baumgartel's arrangement of Right Now features bubbling, percolating arpeggios and a balanced battle of "ooh"s and "ah"s against text without distracting from the ripping solo or driving percussion. He uses similar techniques to similarly great effect on Way I Am, and he is a worthy addition to the Juxtas' history of success with this arranging style (as on the group's album Anomaly). In both songs, the text is a vehicle for syncopation, rather than an emphatic or distracting repetition of words.

Andrew Hill's solos on Right Now and Uprising are edgy and exciting in different ways, with the former pushing his upper range to the limits and the latter a showcase of dramatic theater. Alec Tebbenhoff is sweetly soaring on Way I Am.

Each of the first four songs (plus Uprising) is a virtual clinic in how to use production to enhance and complete the sound without distracting from the singing. James Gammon creates light, sparkly arpeggios (Right Now, Don't Let Me Fall), attentive and skillful dynamic contrast (Not Over You, Legend of McBride), and his work is a critical part of the creative recipe for this album. He does big-to-small and small-to-big transitions, as well as the removal and reintroduction of vocal parts stunningly well, and he saves more than a few of the less interesting songs on the album from lower scores with his understated but exceedingly effective mixing.

Sadly, the group chooses to simply list an artist under each song, implying but not even explicitly stating that they are covering the version as performed by that artist. As RARB reviewers are forced to frequently note, this is simply not good enough. The original authors of these songs, not just the most recent performers, deserve both recognition and compensation.

Yet another collegiate album with top-notch production and a few terrific tunes is waylaid by inconsistency in arrangements, solos, and the level of engagement in the background vocals. There are the makings of a killer EP in here, if only Juxtaposition had chosen brevity and quality over diversity and quantity.

Young at Eight is Juxtaposition's eighth album, and my introduction to the group. My first impression upon listening was that Juxta is a very talented, typical all-male college group. The production is strong, the blend is there, and they clearly put all the energy they could into their vocals. There's nothing particularly innovative about the arrangements, though I'm pleased to note that they seem to take care to limit the nonsensical syllables that plagued the collegiate a cappella scene for so long.

The tone is set right away. Andrew Hill falls a little short for me on Right Now, but nails it on Not Over You. At times, most notably in Not Over You, the production of the vp feels disconnected from the rest of the mix. It gives the effect that a band recorded vocals, guitar, keyboard, and bass in a studio, and then drums in a spacious room with a boom mike. It doesn't match.

There's a nice — well — juxtaposition on Don't Let Me Fall. Kris Harrell's rich solo is beautifully complemented by a rap from Juxta's primary vocal percussionist, Chris Sangster. The opening riff to Way I Am will pull you in right away.

Heaven has a well-done, distinctive soloist, nice, organic vp, and a completely full, appropriate arrangement. And yet, it's boring. This seems like a song in which liberties would have been helpful. Perhaps by being shortened, or playing with styles, or just finding certain moments to play with and expand upon. Legend of McBride might just be the most fun track on the album, though the solo is a bit over-powered in the mix.

Nothing Ever Hurt Like You grabbed me right away with a I Heard It Through the Grapevine feel. The build to the chorus didn't hit the energy I was expecting, though. The solo is delightful by Alec Tebbenhoff, the song's arranger, but the choruses need something more — maybe some sustained notes in the upper voices on an open vowel.

My Heart With You is basically a direct copy of the original. There's nothing Juxta about it except the voices, which is a waste of a track to me on an album filled with so much Juxta personality.

The City and Country Girl are both very well done. Perhaps The City is a bit long, but it doesn't stagnate. Country Girl is just fun all around!

I saw Uprising by Muse on the track list and expected epic: Simba roaring, X-Wing fighters flying through fireworks, Chuck Norris saving Indiana Jones from a rolling boulder, Gollum atop the boulder screaming for his Precious. Instead, Simba gave a nice speech, Gollum played with a sparkler, Chuck and Indy chatted over tea, and there was not a single X-Wing Fighter to be found. I had a cappella blue balls. It was so close.

But overall, I'm glad I got this album. The tracks flow together well. The group has an endearing quality to its sound. I recommend this album and look forward to Juxtaposition's next release!

This album is available on Amazon.