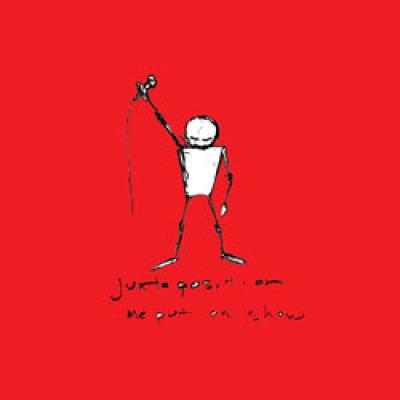 Virginia Tech's Juxtaposition was a wonderful new discovery for me in 2003, so it pains me to say that the group has taken a small step backwards with its latest album Me Put On Show.

The album starts strongly with a throwaway Pre-Ramble that gives the VP'ers a chance to show off a little and is sufficiently brief to be entertaining without being too trite. Then comes the best stretch — Hoobastank's Running Away, just a hair's breadth too busy and just a smidge lacking in the "groove" category to earn a 5; an absolutely terrific cover of The Goo Goo Dolls' Here Is Gone (in my opinion the best track on the album) featuring just the right mix of background complexity, VP, solid solo work, blend, production, everything; and a lovely rendition of Clocks which kept me listening to this overplayed song.

But with the first instance of their "running gag" — a parody on Bud Light's commercials saluting "Men of Genius" where the jokes are re-worked to comment on the unsung heroes of the VA Tech campus — the album loses a step. Indeed, these three parodies serve as markers for where the quality of this release gradually declines, even as they also place a collective smudge on the professionalism of this album overall. Though I am still young enough to "get" all of the references to mascots, swarthy food court vendors and late-night security van drivers, the jokes feel too "inside" and distract more than they amuse.

After the first parody, the album goes down a small notch with The Middle, Your Body Is a Wonderland and Into the Dark, all notable efforts. A word here about the VP: it's good, and sometimes really good, but there are also a few moments when it is lacking. Although Jeff Gray's work elsewhere is commendable, on The Middle, his hi-hat, snare and crash become a bit too similar, and the chorus in particular is therefore missing needed "bounce". Similarly, the musical background on Your Body Is a Wonderland (another overplayed song) is interesting and enjoyable (as is the solo), but the VP by arranger David Kang is too heavy-handed. Into the Dark is a return to Homespun in its processed sound — a studio sound that strikes a nice balance between performance ability and technology. But Into the Dark is a throwback exception to the rule, laying on the processing pretty thick — the result is a bit distracting and ultimately not the most interesting listen.

Down another small step we go with the second parody which is followed by Bad, If I Ever Fall in Love and Power of Love. Bad is the equivalent of (I Just) Died In Your Arms Tonight from Homespun — the track that starts well, with a solid riff for the verse, but is saddled with a soloist who really has to push too much to hit the song's title word (paging Chirs Quidlat), notwithstanding nailing all of MJ's signature yelps and moans. If I Ever Fall in Love is a too minimalist, Boyz II Men-esque effort. I like the idea of deconstructing this song down to a street-corner group sound, but more harmonic and rhythmic complexity is needed to get me past the first verse and chorus. Power of Love sounds like it came from another group. I was a big fan of Brent Yoder's work on Homespun, but despite some inventive uses of movie-related background syllables/words ("Jigawatt!", "Gotta get to 55", etc.), a groove-less arrangement/performance and a soloist ill-matched with his material make the whole tune pretty much fall flat for me.

Then comes the final parody and another weak effort in the form of Shake Your Booty (remix). Here I wished the guys had gone a bit overboard technologically. Medleys like these are already one long joke and when it comes to funk/disco, unless my toes are tapping and my head is bouncing, I'm bored quickly. After a fun, quasi-choral Stayin' Alive intro they lost me. Indeed, the "hidden" outtakes (while too long) and the live version of I Need to Know (the sound was pretty poor, but clearly the performance was a hoot) tagged on to the end of this track were more satisfying than the track itself.

In the end, I guess I'm just disappointed. It's actually a good album, and my expectations for their follow-up to Homespun may just have been too high. But these guys can definitely do better.

If my scores for Me Put On Show look inconsistent, they are. I reacted to this disc far differently as a whole than as the sum of its parts.

On a global level, this is a solid piece of work. Juxta's complex arrangements overflow with oh-so-clever background lyrics that are usually even appropriate. Intonation is just about flawless thanks to some unobtrusive electronic assistance. The "Homespun" production is smooth and punchy with a powerful low end. Solos are undistinguished but pleasant. VP rocks my socks. Song choices veer toward the predictable but not without a surprise or two. Like I said, solid.

But listen to it as a collection of individual songs, and the album falls apart. Almost every track has one highly annoying flaw that keeps it from inspiring aural bliss. Sometimes wrong chords are the culprit (Clocks). Sometimes the arrangements have holes in the bridge (Running Away, Your Body Is a Wonderland). In a few cases, repetitive, annoying background parts are mixed too high and crunchy harmonies too low (Bad, Shake Your Booty). And sometimes the cleverness goes overboard (Power of Love, which won't let you forget for a second what movie the song came from). Only Into the Dark really leaves an impression. A beautiful, obscure song, it sports perhaps the most exquisite use of filter sweeping you'll ever hear on an a cappella CD. I returned again and again to this gorgeous track.

In the end, the overall impression prevails, and Me Put On Show is indeed a solid album. But it disappoints on another front. Juxtaposition is good enough to have put out a disc actually worth buying if you're not a friend or relative and you haven't seen the group live. But the group made what seems to be a deliberate choice not to. How can I tell? Of the disc's 16 tracks (including two hidden ones), only 10 are actual studio recordings of actual songs. Fully three are parodies of the Bud Light "Real Men of Genius" ad campaign that only Virginia Tech students will understand. One is an awesome VP showcase. One is a mediocre live track. And one is a bunch of outtakes that are funny only once. So it's basically a yearbook album, and while it is a worthy effort, the group is capable of more.

Oh, and if you haven't figured it out yet, Homespun was Juxta's last album. Me Put On Show is a perfect anagram of "Homespun Two". I salute you, Mr. Album Title Anagram Maker, for you are a Real Hokie of Genius.

My 80-year-old grandmother loves Juxtaposition's Me Put on Show (Homespun Two). She also rocks out to Van Halen, Ruben Studdard, Duran Duran, Madonna, Christina Aguilera, Usher and Outkast. I have a pretty hep/hip family if I do say so myself. She danced with a wild abandon on Shake Your Booty that you really just had to be there to believe.

And that's good enough for me. Me Put On Show is an excellent (though not groundbreaking) rump-shakin' album that would fit well into anyone's collection. Even the tracks that I thought were only "average" were thus only relative to the masterworks Clocks, and Running Away. Having listened to a lot of these tracks live over the past year, I can honestly say that the recording enhances the talent already present (as their 2004 ICCA regional win attests) within the group. The guys have put out an excellent recording based on some very killer arrangements, outstanding vocal percussion, an intelligent use of studio production and effects and increased sensitivity to what it means to be a singer and a musician. The album has crisp attacks, great phrasing (except on the undersupported Bad) and nice dynamic shifts (not all created by the lowering of a lever in ProTools). The album is a huge step above the group's last recording.

The biggest thing still holding the group back is the individual soloists. Dave Franusich, Jeff Gray and Nathan Harper are burgeoning superstars. Especially Jeff on Running Away; he has a passion that completely enthralled me. It's no wonder that the track listing wisely placed these three soloists at the beginning of the disc. But they can't carry the whole group. Several songs with creative arrangements and production (The Middle, Into the Dark, and Power of Love) would have garnered 5s had the soloists been more comfortable with the material. Conversely, Chris Derry's honey-soaked delivery of Your Body Is a Wonderland wasn't fully supported by the arrangement.

The two real stars of the album are Jeff Gray and Dave Franusich. Not only is Jeff a great singer, but his percussion and beatboxing skills are incredible. Juxtaposition is blessed to have him spitting on this recording. And Jeff is blessed to be partnered with the equally impressive Dave Franusich. Alone, they are both accomplished drummers who'll make any band worth its salt happy to snatch them up upon graduation, but together, they lay down such sweet beats that it's hard not to think that it's all sequenced. To top it off, Dave is as adept behind the scenes as well, making brilliantly compelling arrangements that showcase the abilities of the performers. Not to mention he's got a twisted since of humor as well: "My hokie ate your wahoo", indeed.

Come on, you'll laugh the first time you hear each of the Real Hokies of Genuis tracks.

Otherwise, my grandmother is going to kick your ass.

You can order this CD online at Mainely Acappella or by sending an e-mail to juxtaposition@vt.edu.