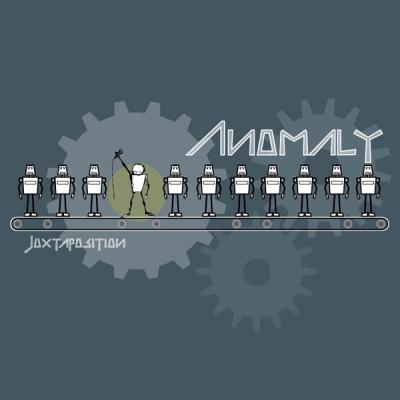 In existence for thirteen years, and with five previous albums under their belts, Virginia Tech's Juxtaposition offers a latest album that has the makings of a rich, well-sequenced, tightly produced album. Their overall choice of repertoire is a seamless blend of contemporary, alternative-pop and inspired me to create a mix of the original artists' music.

Where this album failed to impress me was its lack of emotion. I am a critic who appreciates albums with heavy use of post-production techniques as long as they do not hinder the raw emotion that a cappella vocalists can produce. From one track to the next, I heard very little use of dynamics (even studio-produced dynamics were virtually non-existent). Even in the background parts, everyone's timbre was so similar, it was as if the same person might have sung each part. That might be an intentional effect, but I still enjoy the personality and stylistic differences from one voice part to the next. There is some fantastic post-production that should not be taken for granted: tight cut-offs in every song, vocal percussion that does not overpower but enhances each song perfectly, and balance between parts that allows me to hear new parts within songs each time I listen to the album.

Most soloists seemed interchangeable from one track to the next, which may also be attributed to like genres for many songs. With the exception of Zack Bailey's solo on Street Spirit, all soloists left me appreciating their pitch but disappointed with their uninspiring interpretation of lyrics. Meant as both a compliment and critique, the soloists were just ... nice.

Arrangements ranged from more repetitive (Regulate, Home) to extremely impressive (Hurricane, Polaris, Blurry). With an ear drawn immediately to great arrangements, I felt the album was front-loaded with great arrangements, but Zack Bailey and Matt Bolling both are very talented arrangers (Brent Yoder as well on Blurry), utilizing enough voices on held chords and interspersing lots of creative lyrics and counter-rhythms.

It took some serious cojones to take on Regulate and, for a rather repetitive original song, I was definitely entertained and glad they didn't overkill the track with too much of Usher's Yeah added in for variety. She Will Be Loved has quickly become a cursed a cappella song in my repertoire — unless you're doing something drastically different, it's overdone and hard to get excited about. Don't Stop Believin' is a fairly common a cappella song, but my unrequited love for Journey made me biased towards liking this track. Of note to other groups: this particular song was a great example of how to execute a guitar solo well in mixing, as guitar solos done a cappella can often ruin a song.

Favorites on the album are the first four tracks (Hurricane, Polaris, Speed of Sound, Blurry), all with great arrangements, mixing, and solid singing all around. Criticisms aside, Juxtaposition delivers a beautifully-crafted final product that is entertaining and technically superior from start to finish.

If Juxtaposition's last CD in 2004 was very much lacking in consistency, then Anomaly progresses signficantly, showcasing an all-male ensemble with a solid sound, polished production, and an engaging repertoire.

It is possible, however, to have too much of a good thing, and my issues with this CD lie in its tracks being so consistent that it instead becomes "constant" — yes, Hurricane, Polaris and Blurry (just to name three of the first four tracks) are markedly different songs, but there is a sameness to the palette which has been utilized for most of the material that robs the songs of their individuality and creates a bit of a sonic "mush" for me.

What do I mean by a sameness of palette? Well ...

... the CD sounds like it could have been arranged by one person, despite actually featuring quite a few different arrangers. There are a few ear-grabbing unique moments (the nicely-rendered Clocks allusion in the opening of Speed of Sound, the purity of the You and Me opening, the first seconds of Touch the Sky) but most everything else feels very much the same. Not helping is the lack of any significant development or variation in the arrangements beyond the initial verse/chorus — with particularly uninspiring bridges on the opening two tracks. Also, I yearned for a bit of "space" in many of the songs — so many felt like everyone was singing all of the time on every conceivable note in the chord. It's not so much a "wall of sound" style, since the music is never overpowering and the arrangements aren't overly busy, but there is a definite "constancy of sound" that becomes a bit draining, or perhaps "droning" on the ears.

Taken from a wide view, the group's own Matt Bolling with pro Dave Sperandio (with a bit of help from Tat Tong) have done a first rate job with production with nary a stray note, good blend, tight, crisp rhythms, tasteful use of effects, and VP which has been sampled but not to super-human effect. But surely not all of this repertoire warrants the same mix and yet, that's what I was hearing. Placement of the individual parts felt virtually identical throughout — sometimes to the detriment of what I thought sounded like a nifty background lick that was too obscured to really hear — and dynamic variation is virtually non-existent (though some of the fault for the latter must lie with the group itself too).

This last one is tough because it's hard to put into words and harder still to figure out where the fault lies. But for lack of a better word, the CD lacks energy. I don't mean that the Juxta guys weren't thoroughly stoked about recording of course. But whether it's the original performances or what was done to them in post-production, there just something "inhuman" about their sound (not so much alien, but more "Borg"-like). By way of example, I have no idea how much editing post-production went into Blurry and Mr. Brightside but these are songs that for me require a fair amount of raw, reckless abandon. They need to ooze energy and verve. They need to make me bounce my head and want to dance. Juxtaposition's versions are quite well-rendered, but ultimately they left me a bit cold and unexcited.

So I guess this CD falls into that unusual category of objectively quite good CD's that I just didn't really enjoy that much. What does that mean for you? Well, if you like the material, I would give this CD a chance. You won't find the definitive versions of anything, but if you'd be happy with another good rendition, this CD has plenty.

Can it really have been three years since the boys of Juxtaposition released their last recording Me Put On Show? For those of you who care, my grandmother's still listening to their last album. I'll have to make sure she gets a chance to listen to this one during her upcoming birthday party. I'm sure she'll get as much joy out of it as I did.

Anomaly — and no, I'm not going to make a pun on the album title at the end of my review, much as I want to — is a really strong album. It's not ground-breaking by any stretch of the imagination, and in truth, it's a low five for one main reason that I'll get into later. But the members of Juxtaposition have a lock on what they do, and they do it with aplomb. Every track executes their talent and the "juxtasound" with a mastery that was every bit worth the wait. Glad to see that the newest members didn't rest on the laurels that were lauded their way in the past.

What's also great is that they decided to go with outside studio help. The extra ears helped to erase most of the technical flaws that can appear on a product when the artist is also the producer, and therefore is too close to the art. Sperandio, Tong, Bates, and Matt Bolling seemed to have tapped into the pure essence of the group, coloring each track with their own individual flair, without masking the signature of the guys who are singing.

The arrangements are funny, intricate when need to be and fitting to each of the songs. Much has been said on the forums about the "creativity" behind creating lyric-based vocal lines for the background. For some the concept can be distracting, but I've always been fascinated by that particular technique — even failing the attempt in several arrangements I penned back in the day. So I applaud the people who can do it well, and Bolling, Brent Yoder, the Dans Martin and Troha make it seem easy. But the real Hokie genius is Zack Bailey.

He put his mark on this album and hard. And we listeners are the true beneficiaries. He had a hand in penning nearly half of the album — which could be a major reason why the album sounds so consistent without sounding homogenous. You can see the direct line of descent between grandpa Yoder and wunderkind Bailey. Anomaly closes with the most brilliant rendition of Street Spirit that I've heard in a while. Not only did Bailey arrange this nugget of gold, but his solo is absolutely superb. It's a winning track from all standpoints. I can't wait to hear what he delivers in the future.

Two other tracks that will surely make the rounds of discussion are Home and Touch the Sky — both arranged by the very excellent Martin. I'm not a Kanye West fan, don't ask, but I couldn't help but be floored by Touch the Sky. Something just clicked with this rap. Whether it's the organic feel over the electronic beats or what, I'm just mesmerized by what Bailey (see) and Martin were able to lay down for Eric Johnston III to just rip it. And Martin's skill as a rapper is pretty sweet as well. Home comes in third after my two favorite renditions by Twisted Measure and Transit. Alex Kibler digs deep and dirty for this one. Wow. The only problem is that I'm missing the soprano voices that rocks Twisted Measure's version.

I'm saving what I hope they'll do better for the end. The "juxtasound" is really great, but it's a wall of sound that can get really boring on the 10th listen to the album. There are not a lot of dynamic shifts in the backing vocals. Just this never ceasing sound. Even the delicate ballads seem forced at times.

So yeah, get Anomaly.