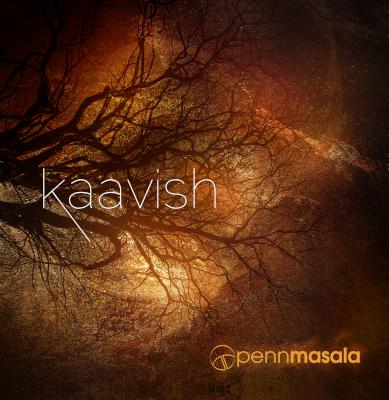 It's all too easy to get lost in Penn Masala. The arrangements are long and winding, the mixes are thick with countermelodies, and the leads get passed around from this section to that and back again. In last year's review of Panoramic, Elie Landau was critical of the overabundance of Hindi/American pop mash-ups padded to heck with droning "ooh"s, "oh"s, and "aah"s. Kaavish is another batch of this same style that has become the backbone of Penn Masala.

Akshat Vaidya and Vinay Rao, the two primary arrangers, aim to squeeze the whole play into every act. You get welcomed with a catchy line, plunged into an ominous instrumental (so to speak) breakdown, then swept away in an epic amalgamation of percussion and countermelodies, all in one song! I like that sort of rambling once or twice on an album. Eleven rounds takes its toll. The conclusion of a medley, or any drawn out composition for that matter, should make you go, "I can't believe that build-up came together so brilliantly." Not, "I can't believe this song still hasn't ended."

The arrangements are just as deep as they are long. Every song has a constant foundation of "ooh", "oh", or "ah" announcing the chord changes. Below that are some repetitive subdivisions in the bass. Then there is a polyrhythmic riff going on in the tenors, which starts by itself but by the last chorus has multiplied into a whole orchestra of moving lines. Add in a steady stream of percussion with way too much woofy reverb and not enough punch. And just for good measure, have two or three soloists do a call-and-response in different languages about themes that may or may not have anything to do with each other. As a producer, it is extremely difficult to mix space for all these layers. The human voice has a lot of color to begin with, and when you try to overlap too many of them you lose parts in a muddy soup of overtones.

When your ears get led down too many side streets, they lose track of what they're hearing and where they're going. Penn Masala has some clear strengths that have earned them spots on several BOCA compilations over the years. The soloists are genuine, the blending of languages make for some enchanting syllables, and the melodies are downright catchy. Now they just need to find a more focused route for bringing all these elements together. Parts of Kaavish make me want to learn Hindi so I can engage more with the narratives and really sing along. But after plodding along back roads for fifty minutes, I just want Penn Masala to learn to skip the convoluted detours, hop on the freeway and sing away.

"Kaavish (literally "struggle") is a word borrowed from Urdu poetry used to describe the artistic innovation it takes to convey powerful imagery."

The sound of Penn Masala is a blend of Hindi, Carnatic and Sufi fused with radio favorites, both past and present. With the release of its eighth album, Kaavish, this characteristic sound has descended from innovative to unimaginative. Kaavish is an appropriate title for an album from a group whose relevance continues to struggle.

"We have begun to think about our music in a different way as our goals and aspirations have evolved."

Kaavish depends on generating listener interest through their fusion of Eastern and Western music. While this approach is clever, it is not necessarily impressive — especially when songs are fused together that don't share much in common. Fix You — Ishq Bina is a fusion of a Coldplay classic with the opening track from the 1999 Hindi film, Taal, by A.R. Rahman. Fix You is a song written  to comfort a wife in the event of her father's passing, while Ishq Bina is about loneliness and the search for love. I commend Penn Masala for creating a new tension by experimenting with the juxtaposition of these two songs, but this sort of thoughtful fusion of Eastern and Western does not pervade the album. The goals and aspirations of Penn Masala may have evolved but their approach has not.

The arrangements on Kaavish generally depart from the Penn Masala mantra of "less is more". They are nuanced and creative while not detracting from the soloist too often, and the soloists are generally acceptable. While a majority of the lyrics are in Hindi (translations are not provided), it is never difficult to surmise what the soloist is singing about because they each sing with such conviction and emotion.

"With cultural influences spanning the Subcontinent — from Sufi to Carnatic — Kaavish embodies a fresh take on South Asian a cappella."

Kaavish is definitely not in my top ten but it's not in my bottom ten either. To remain relevant beyond the dozens of South Asian a cappella groups that are beginning to surpass them for the forefront of this subgenre, Penn Masala will need to find something unique to say with its next album.

Before Kaavish, I didn't have much exposure to South Asian music. I'd never heard Penn Masala before, nor do I understand any of the non-English languages sung. While these factors could have inhibited my ability to connect with the music, I found myself becoming a fan of Penn Masala's artistic concept. According to the album liners, the word "kaavish" translates to "struggle" in English, which here is meant to represent the amount of energy and strength to create meaningful art. I feel Penn Masala did a great job of elaborating on this theme, and creating emotive performances with the right dose of energy and intensity to accurately convey their point to the listener.

The fresh, innovative arrangements make Kaavish particularly successful. Unlike what you might expect, the songs found on Kaavish aren't merely American songs sung over in alternate languages or a collection based solely in South Asian repertoire. Instead, Penn Masala has taken and paired well-known American/Western hits with complementing selections from South Asian popular repertoire. The lyrics are a blended mix of English, Hindi, and other languages. The result is a product that is instantly relatable to English-speaking audiences while still delivering an infusion and exposure of non-western musical culture. The album didn't include a translation guide for the songs, which I thought could have helped deliver the full immersion I believe Penn Masala is striving to create. Still, you don't necessarily need to understand all the lyrics to appreciate the music.

The group cleverly integrates Western pop vocals with South Asian styles. In general, the solo performances on Kaavish are vocally sound. The soloists do a fine job transitioning between the corresponding phrases, choruses, and versus of each song, a difficult task that could make or break the listening experience. I also appreciate how well the soloists do at leading the intensity instead of competing with the background vocals in songs. Some of my personal recommendations from Kaavish are Fix You — Ishq Bina, Mad — Pee Loon, Sun Zara — U Got It Bad, and Mann Mein Ujaala. Can You Stand the Rain — Mann Ki Lagan is another favorite.

If you're looking for something fresh, energy-driven and unique, or are a listener interested in exploring different genres and cultural stylings, be sure to check out Penn Masala and its 2013 release.

To purchase this album or previous releases, please visit the group's website, CD Baby, or the iTunes Store.