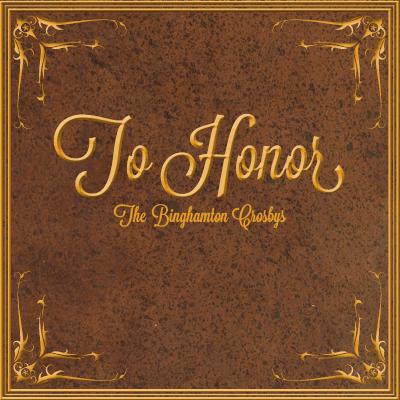 Collegiate a cappella has a feel. It's energetic, fun, driving. But it can also be predictable and one-dimensional. The Crosbys flip both sides of the coin on their latest, To Honor. The delightfully irreverent back-up lyrics the group has become famous for since Super Bos are in full force. The guys are belting with gusto. The energy is non-stop. But there are few moments that make you feel anything, much less rival the originals these guys cover.

The Crosbys have great taste in music, leaning heavily towards classic rock of the '60s, '70s, and '80s. They also don't mind disrespecting their own song choices if it strikes them as funny. (What "gotta take a dump" has to do with 25 or 6 to 4 I can't even guess.)

If all singing is karaoke, and pop music has already eaten itself, then the Crosbys are the last geniuses standing. Their zeitgeist: adding layer on layer of mockery, in both deliberately oversung leads and ridiculous back-up lyrics, parodying not the song so much as singing itself.

It's actually tough to score these guys. It's like scoring Stephen Colbert on news reporting. Yes, he does report news. But that's not really the point. Colbert covers the news so that you laugh. The Crosbys appear to cover songs so that they laugh.

Production by Ted Trembinski and mastering by Dave Sperandio are solid, making all the musical roughhousing an easy listen. Less humorously, the liner notes fail to credit any of the composers or lyricists, although the arrangers and leads do get their bow. And strangely, the exact running time of each of the songs is listed. But who's the music director? What vocal parts do people sing? What year do people graduate? Who cares? Not the Crosbys!

The men of the Crosbys are lovable, irrepressable goofballs. The music is good for a toe tap and a laugh and it doesn't really aim for much more. If that's your style, these guys are the best. If you take your music seriously, this is simply not the album for you.

You don't hear many albums like To Honor very often these days. The Binghamton Crosbys hang on to a genuine, lighthearted style complete with clever (and sometimes crude) jokes and casual rhythm and intonation. It's a charming, gimmicky style full of classic tunes you witness at freshman orientations, but a style that many groups have left behind for contemporary hits and synthetic precision. Sometimes spot on and sometimes way off, To Honor is a spirited collection that reminds us of the absurd gimmicks and word games ingrained in the collegiate a cappella tradition.

The Crosbys start with a selection of songs that comes almost entirely from vinyl. The most contemporary piece of music is the Halo® theme song from 2001. That's Halo the sci-fi-shooter video game; an ingenious collegiate-male-inside-joke that the Crobys use to introduce War Pigs. Otherwise the album reaches back to 1990 for I Wanna Be Like You, and further back into the '80s, '70s, and '60s for the rest. There's nothing wrong with an album of oldies. It's nice to hear some familiar tunes from a time when music wasn't so commercial. What is wrong is that the Crosbys don't give any credit to the original artists, which does not do much to honor the legends of rock.

In arranging these classics, the Crosbys make silly background lyrics the utmost priority. Sometimes it's witty, as in "give me a blow dryer" during War Pigs. Sometimes it's downright obnoxious, like the repeated "I am a Crosby, Do Me Now" in Don't Stop Me Now. The explicit introduction of the bridge is funny once, but three times is too much. Often the words are incomprehensible, and particularly in Nothing From Nothing it just sounds nonmusical. There is a fine line between syllables that amuse and syllables that distract, and too often The Crosbys cross that line for a joke the audience will likely never get.

Of secondary importance is the sound, and it sounds pretty swell. It is definitely not studio-sterilized, but rather a natural blend that feels more appropriate given the arrangements. The Crosbys emphasize that authentic sound by using as much wholesome body percussion (snaps, claps, and stomps) as vocal percussion. The most noticeable departures into production magic are the extraordinarily convincing distorted vocal guitar parts in Long Train Runnin' and Whipping Post. The solos aren't the most inspirational, and some of the bass rhythms and upper-register notes get sloppy, but the Crosbys are certainly capable of holding a melody.

To Honor is a testament to how absurd a cappella can get. It left me wondering why the group would choose a live concert recording for its penultimate track in addition to wondering, again and again, what exactly the backgrounds are singing. It's not my favorite a cappella to put on repeat, but it does have one of my favorite a cappella moves ever. Some groups arrange like Mozart and sing like angels, but nothing compares to The Crosbys doing Flash in the middle of 25 or 6 to 4. That's a cappella.

The first impression that the Binghamton Crosbys' To Honor gives you is one of pure honesty: their soloists, their background voices, and the arrangements straightforwardly announce their presence. Even the level of studio production is kept to a minimum, keeping the overall sound pure. In an album of otherwise sheer directness, the most unexpected thing on this album is the inclusion of Queen's Flash in the middle of 25 or 6 to 4, which is not notated anywhere in their liner notes. I normally wouldn't be a stickler about that, but considering the track is about 50/50 of each, it's important to give credit to both songs accordingly.

Clearly, the men of this group love to sing. The live track of Do You Love Me showcases this perfectly. The energy is strong throughout, and every entrance is purposeful.

The singers' honesty aside, the album has a long way to go. The repetitiveness of the arrangements grows stale quickly. These singers have dynamic control, but no song dips below a mezzo forte. This volumetric choice is particularly damaging on The Sound of Silence, which loses meaning and nuance with all singers blasting throughout. Innovative use of soft dynamics can be difficult — but not impossible — with larger groups. The Crosbys are 22 (!) in number, and often that translates to too many people overpowering the soloists. This is a particular tragedy on War Pigs, where soloist Jon Karlas can barely be heard absolutely crushing the solo over the "bah nah"s of the ensemble. Karlas is the standout soloist on this album, also taking mastery of the aforementioned Flash interlude.

As a consequence of the dynamics, the tuning is also lacking. Nothing From Nothing and War Pigs just fail to lock quite correctly, and Your Love struggles in the worst place possible: the climactic high notes. The cutoff of Your Love is a bit of an oddity as well: it seems that an echo effect was used, but as an afterthought rather than intention. The end result of this choice is a track that appears to end with one singer completely missing his cutoff, sounding sloppy instead of powerful.

The album closer, Don't Stop Me Now, is the most original arrangment, but the choice of words underneath (it sounds like "I am a Crosby, would you like to do me now." Classy, gents.) is incredibly distracting and makes it difficult to listen to. The underlying words in the choruses become more nonsensical, which then turns into an entirely different song...or three. While I appreciate the musical awareness necessary to put these songs together, the purpose is pretty difficult to discern. The songs are almost completely unrelated, and the full scope of the medley is lost in a horde of jumbled words.

Overall, To Honor is okay. If you love excitement and shenanigans, this is the album for you. Otherwise, look elsewhere.