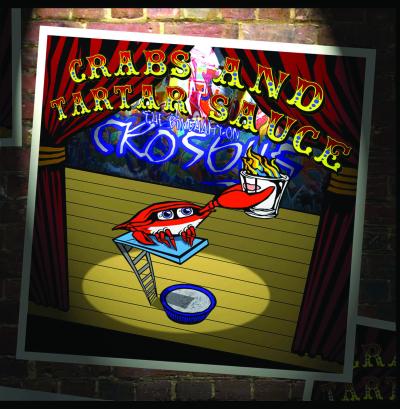 Like so many other recordings, the Crosbys' latest is destined to please current fans but not to convert new ones.

Crabs and Tartar Sauce begins with the Van Halen classic Right Now. The arrangement, from the vocal lines to the percussion, seems like an exercise in cutting and pasting; some of the parts are practically unperformable, others just oddly identical. The tools available in the studio are powerful and seductive (young Skywalker). They open a world of creative expression that was barely imaginable 15 years ago. But beware the dark side.

Aside from artificiality, track one also demonstrates a pervasive problem in collegiate a cappella: awkward syllables stealing focus from the leads. This is also repeated on other tracks on this CD. I think I speak for most listeners when I say that "simm simm" and "bah" should not be the focus of the song. Relax the diction and choose syllables that don't distract and you're out of the woods.

While this bit of constructive criticism falls more heavily on the Crosby's primary arranger, Mike Boxer, he redeems himself admirably with the hysterically brilliant back up lyric "Now the song is getting faster" at the most perfectly appropriate moment in Billy Joel's Scenes from an Italian Restaurant. That along with some other "do me"s and "Do a Crosby" are classic Crosbyisms, harkening back to Super Bos. (also check out Kern's 1993 arrangement of Jukebox Hero).

Tracks like the R&B medley Supafunk, Hey Ya and even Mama shine under the studio production choices of John Clark, Mike Boxer, Evan Behlivanis, Mike Day and John Soto. The artificiality of the production sounds just right in these contexts.

Given some of the past Crosby CDs, I can understand why the group went a little overboard with the autotune and cut and paste editing on Tartar. I still look forward to the Crosby CD that surpasses the solid yearbook status (like Tartar) and starts making new converts to this long-standing New York group.

The all male Binghamton Crosbys latest release, Crabs and Tartar Sauce, is a stellar follow up to their strong 2001 release, Crosbys 101. However unlike the organic sounding 101, Crabs launches the Crosbys into the growing arena of hyperproduced collegiate albums; the end result is breathtaking.

This album is one of those rarities amongst technologically advanced recordings, when the perfection of the parts clearly illustrates that almost everything has been touched-up, enhanced or otherwise morphed in the studio, yet manages to sound almost natural. To this I credit phenomenal mixing by John Clark, and uniform, musically solid arrangements from Mike Boxer. There really isn't much to speak of in terms of imperfections, wrong notes, or otherwise anything I could categorize as mistakes. Tuning, tempo, vowel unity, dynamics — all top notch. Especially noteworthy is the painstaking care taken in mixing the percussion, with beats that drive and energize the album.

With few exceptions, I liked everything about this album. Song choices range from the simple, heartfelt ballad (The Luckiest) to the funkadelic hip-hop medley Supafunk, and even an expertly covered Van Halen piece. One highlight for was the album's numerous instrumental breaks. Italian Restaurant provides an apt example, featuring both an extremely realistic saxophone and an energy-filled scat break. Supafunk is also a great track, clearly raising the bar on hip-hop a cappella. A medley featuring at least a dozen songs, pieces of it are hardly distinguishable from the originals. The entire album exudes energy, both from soloists and backing vocalists. Solos aren't all excellent, but none are less than mediocre.

There are a few areas for improvement. I felt the live Dust in the Wind was disappointing when compared with the rest of the album, in energy, tuning, and recording quality. The bit on body percussion was superfluous, and was not entertaining in any way. And finally, for as good as Mama is, I still prefer the version on Crosbys 101; this version feels like little more than percussion and a soloist.

The Crosbys have created what I consider the best collegiate album I have ever heard in Crabs and Tartar Sauce, one that will live in my CD player for some time.

I'm in an up-front mood today, so I'm just gonna say it: Crabs and Tartar Sauce rocks. And pops. And jazzes and funks. And, uh... hiphops. And does it all really well. There are no half-assed attempts; whatever the genre, you sound like you were meant to sing it. Apart from Dust in the Wind and body percussion (which some people may not like, but I found listening to 3+ minutes of a guy slapping various parts of his body to be very informative), the album is damn near perfect.

Huh? What's that? Too much gushing, you say? Okay, then. I was able to come up with a short list of things you could improve on . . . it took me dozens of listens, but I found some things nonetheless. Here are my tips:

But those aren't necessarily faults; the album's awesome. Keep it up.

To order this album via paypal visit the group's website.