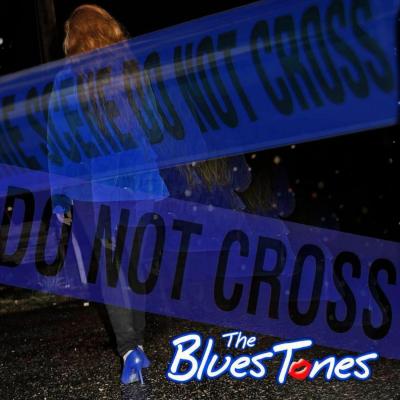 The BluesTones of James Madison University have some phenomenal, stand-out tracks on their latest album, Do Not Cross. The most memorable are those where the group creates a haunting, sultry vibe; Better Dig Two and Two Black Cadillacs in particular capture an unforgettable dark, smoldering atmosphere.

Let's start at the end, with Two Black Cadillacs. This performance is the definition of leaving the listener wanting more: Ariel Spagnolo does a masterful job with the solo, and there are some great textures in the background courtesy of arranger Kelli Hutchison. If the BluesTones could make every song this evocative, then Do Not Cross would be a lock for my RARB Pick of the Year.

They don't, but Do Not Cross is still a very good album with a number of noteworthy moments. Lie to Me is another gorgeous arrangement, executed with fantastic dynamics — those slow, sustained notes aren't always easy to perform compellingly, but the BluesTones deliver them effortlessly. Beside You takes the listener on a beautiful journey as soloist Jordan Frary segues from tender verses to soaring choruses, while Piece of Your Heart captures the sultry, sassy attitude that the BluesTones execute so well.

Do Not Cross could have benefitted from a tighter focus, and perhaps a slightly shorter, more cohesive track list. Battle Scars is well sung and well delivered, but a rap song in the middle of the album is incongruous with the rest of the group's repertoire. Troublemaker and End of Time are both a bit repetitive, giving the album a bit of a slump towards the end.

I started my review at the end, so I'll end with the beginning: the BluesTones have done themselves a disservice by kicking the album off with the overdone Wrecking Ball. The song may not have been overdone when the group chose it or recorded it, but certainly no one should be surprised that such a hot single would be ubiquitous in the a cappella world. The BluesTones give their own little touch with a wink of Jordin Sparks' Battlefield in the bridge (kudos to arranger Nicola Bertoni), but I wish the group had done something a little more groundbreaking with this song.

Starting the album with this tune gives the group the impression of being just another group doing note-by-note versions of overdone songs, and that's a tough stigma for the BluesTones to claw out from under. They certainly do so — so many of the rest of these songs give a unique point of view, or just a powerfully evocative performance, that it's obvious that the BluesTones have more to offer than just the latest Billboard hit. Do Not Cross has some outstanding moments, and I hope the group can capture even more of those going forward.

The BluesTones deliver a no-nonsense pop powerhouse bursting with tracks you're sure to recognize. The girls rock their solos and fill out the space with energetic percussion and background vocals. The sound is irresistible for the first half of Do Not Cross, but feels repetitive once you've listened to it for twenty minutes. What is it about pop that picks you up and lets you down so fast?

The soloists are almost too good to be true. The BluesTones have a wealth of rich, controlled voices well suited to pop, country, and hip-hop. Out of twelve songs, there are only a few moments where I wish the group had gone with a different take. With more than twelve featured soloists, that's not bad. The one drawback to the universal-pop-queen tone is that it lacks the individualism, the vision, to make these renditions stand out among all the other covers available.

The song structure is similarly predictable: intro-verse-chorus-verse-chorus-bridge-chorus-chorus. The melodies are catchy enough that the BluesTones almost get away with essentially copy-and-pasting sections. Almost. Battle Scars and Two Black Cadillacs are particularly droning, and the choruses to Wide Awake and Piece of Your Heart could definitely stand some varied arranging. The exception is Lie to Me, which Nina Beaulieu very artfully transforms into an ethereal anthem that will stand your hairs on end. Otherwise these are straightforward arrangements that excite but don't have the narrative arc to last.

The production is either really cool or really contrived. In general, the use of reverb and delay is spot-on of what you'd expect to hear on the radio. Everything is compressed and balanced such that you get a warm octavized bass driving an overall punchy recording. That's cool. The filters are what sometimes sound contrived. The distortion on Better Than You makes a distracting buzz on an otherwise phenomenal track. The way the percussion is EQed in War is Over is so reminiscent of a trip to the dentist that it’s an effort to stick with it to the chorus. The full arrangements and full production make for a squished mid-rangy sound that shorts itself on background clarity and doesn't offer enough dynamic contrast to engage for a full twelve-track album.

Every time I listen to this album, I am completely mesmerized from Wrecking Ball through Beside You, I start to lose interest by Piece of Your Heart, and I always think that Wide Awake is the last song. By then everything starts to sound the same. Do Not Cross follows all the elements of the pop formula: soloists with attitude, simple song structure, and production you can crank. The formula gets you in the zone for a few minutes, but modern pop artists don't really expect to hold your attention any longer. Do Not Cross is a strong "4" album that has no trouble picking you up; the BluesTones just need to experiment outside their pop bubble for a "5" that won't let you down.

The second track on the album, Better Dig Two, has already won (tied for) a CARA for Best Country Song. The soloist, Somer Brillhart, slowly pulls you in, dragging you into the heartbeat of the chorus. By the time she gets to the money line ("If you go before I do / I'm gonna tell the gravedigger, he'd better dig two"), the hint of crazy desperation is clear and convincing. This is the kind of music that the producers of the television show Nashville wish Hayden Panettiere could pull off.

The BluesTones have a sass to their sound that is uniquely theirs. On Better Than You, the pulsed "wah"s and "jadadada"s in the background create a rich texture that echoes throughout the recording. This is a trick they revisit throughout the album but seem to have deployed in a distribution that doesn't become overwhelming or annoying. It's almost dubstep-lite. Their country flavor pops up elsewhere in the album, too, giving many tracks an interesting twist.

I appreciated the BluesTones' instincts with pop music. Wrecking Ball and Wide Awake aren't songs I normally care for, but they are presented on this album with deeper consideration. I loved soloist Paige Miller on Battle Scars (or at least, the person singing the hook), who acts as a phenomenal counter to the low depths of Katie Cadwell's alto rap/solo. The two play off each other incredibly well, setting up tonal contrast and anticipation for when they finally interact in the bridge. The only place where the group fails to translate the poppy passion of the original song is on their recording of End of Time. Recognizing my own Beyoncé-runs-the-world biases, I found it a hair slow in tempo and lacking the passion of the original. They pulled it back in on Troublemaker, however, turning it into, again, something I actually wanted to listen to.

Mostly, I'm impressed with the BluesTones' concept of this album, which comes across well: it's not just a yearbook recording session, but a thought-out, messaged album. It's clear from this album that the BluesTones are one of the best all-female collegiate groups recording right now. They do country-pop so well, and I look forward to seeing if they can continue to build on this strength in the future.  Maybe a little Don't Put Dirt on My Grave Just Yet? The Nashville producers would approve.