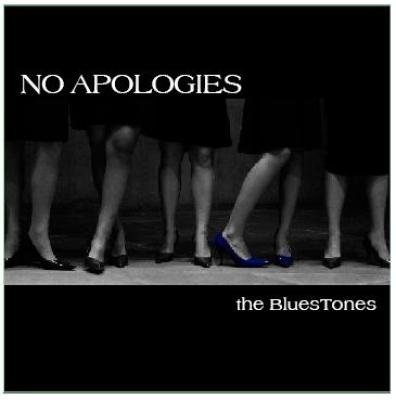 The James Madison University BluesTones's latest CD is called No Apologies and I'm here to say that it's an apt title. The recording offers up a solid dose of a cappella goodness that leaves this listener filled with pleasing aural satisfaction. The arrangements are much better, the soloists sing in the more mature sections of their voices, and the production wraps the women in appealing soundscapes. The ladies are doing their own thing — even if their thing is similar to most of the other top-tier female groups out there — and the quibbles I have are mostly a matter of preference, not quality. What I love, I love fully, and what I hate, I hate passionately, and I'm not apologizing for that either.

The opening track inspires a love/hate relationship. Crazy is an awesome song, so I was a bit confused when I checked the liner notes to see that this version is attributed to Alanis Morrisette. It sounds exactly like the Seal version, so I had to go to Wikipedia to see what's going on (and possibly point out an error). Ah, a "GAP" commercial and "The Devil Wears Prada", so be it. I really like this arrangement and the production gives it a nice crisp feeling, but the soloist, Meredith Robotti, seems a bit pinched in the upper register once she's into the meat of the song. Her voice doesn't really fit the mood that's been set.

Interestingly enough, Crazy is the only track on the album that could be considered "high energy" or "dance music". Everything else falls into a wailing ballad/melancholic R&B style even when it wasn't meant to be. Take for example, Eve 6's Inside Out. The original is generally an angry, blood-pumping rock song. On No Apologies it's been made anemic, without much passion or deliberateness. The group gave the same treatment to an inane Life is a Highway. I would strongly warn Lauren Streagle, Lauren Kidd and Robotti not to take their arranging guidance from the television shows: "Dance Wars: Bruno and Carrie Ann" or "Clash of the Choirs". The fundamentals are there ... they just need to be a bit more creative.

The only other energetic track is the lively rendition of Redneck Woman. I simply love this song, as my ringtone attests. Mor Hall's over-the-top delivery was just the shot of adrenaline/estrogen needed to give liven up my 12-hour drive from Durham, NC to Memphis, TN.

As usual, The BluesTones excel at the ballads. Disobey, Breathe, Gravity and Nothing are worth putting into anyone's heavy rotation. The warmth and maturity of Streagle's solo on Breathe captivated me upon first listen. And here's an interesting issue that I'm glad we're facing: Is this version of Gravity based on Bareilles's a cappella version done with UCLA's Awaken A Cappella or the current studio version off of her debut disc? Either way, it's a loving homage to a rising star and I'm glad it was included on the album.

We get a great glimpse of The BluesTones comfort zone on No Apologies — overly safe, but still very satisfying. I hope that they'll explore new boundaries on their next release.

With a track list of mostly sugary pop songs — songs covered, with only two exceptions, countless times — the JMU BluesTones' No Apologies is a tough sell for anyone who has heard more than one contemporary vocal album.

Several weaknesses persist throughout, precluding rhythmic, spatial, and emotional/attitudinal dynamics. Weak percussion sounds — seemingly around eight different sounds make up the kit for each song — undermine the drive and groove of nearly all the songs. Most of the arrangements suffer from lack of sonic relief. The quality of the leads is inconsistent, and they sit a bit too low in the mixes. The energy in the backs is conspicuously absent for 90% of the album.

The BluesTones have followed the lead of many of their peer groups in sampling and sequencing their percussion. This method usually yields higher quality sounds — punchier kicks, thicker snares, hotter hats — but on No Apologies, not only are the sounds weak, they are far too consistent and predictable in their sequencing, especially on Black Horse and the Cherry Tree. Combined with unrelentingly present, consistent, and for the most part predictable backing vocals, many of the songs lack climax, tension, release, or emotional arc of any kind.

The bar lines are much too pronounced in most of the arrangements, resulting in predictability and a blocky feel. Especially on a song like Linger, the higher lines especially could be treated with a freer interpretation of the sonorities. Notes can be held across the bar lines to create tension and chordal goo.

Four of the songs present very strange artifacts in the leads. The solo tracks on Crazy, Inside Out, and Breathe all sound as if the soloists sang with high-frequency, high-amplitude vibrato, and then that vibrato was quashed in the editing. The resulting sound is just odd, and these three tracks never really settle. The lead on Redneck Woman is harshly tuned, and the placement of it makes it sound phasey.

The BluesTones are clearly capable of mustering the energy to carry the backgrounds, given a great arrangement and lead, as is the case on Disobey. This track is head and shoulders above the rest of the album. If they are looking for a recipe for future studio success, they need look no further than this song. The arrangement is dynamic, the lead is excellent, and the backs are sexy (especially the altos).

Nothing is also a cool song with a solid lead, but the backs never feel comfortable or confident. The backing vocalists should pay more attention to the stylistic elements of the lead. Sing "nothin'" instead of "nothing", "yuhself" insead of "yourself". Over-enunciating those echoed lyrics compromises the attitude of the song. It can be helpful to notate pronunciations phonetically in the arrangements. Then the singers have no excuse.

Easily avoidable issues cripple several of the other songs. In Black Horse and the Cherry Tree, the soloist does not hit the low notes, and the power in the chorus is lacking. Raise the key. A high note in some ad lib section at the end of a song is much easier to change than low notes throughout. The soloist also chooses to change the rhythms from the start, which is permissible if the new rhythms are cooler than the original ones, but in this case the new rhythms ignore much of the syncopation, resulting in a straighter, less interesting flow. Life is a Highway is obviously arranged from the watered-down Rascal Flatts cover, as opposed to the Cochrane original. The attitude is blatantly absent for the first two thirds of the song, and the bridge is too tuned to have a "crowd" feel. Here again, the soloist is way below her range in the opening verse. Gravity is simply a disappointment. A direct transcription of Sara Bareilles's original arrangement would be much more satisfying. The half-sung climax is criminal.

The album is in tune and in sync. The production is solid. The technical foundation is there for the BluesTones to put out some great recordings. What they need is more creative arrangements with cooler syllables and more focus on line and phrasing, more skillful percussion, more interesting song choices (like Disobey), and more effort on studio singing.

No Apologies is your average a cappella album, full of Top 40 staples from the past 15 years with a couple of surprises sprinkled in. Listening to the JMU BluesTones's latest album is the equivalent of watching a B-movie on a rainy Saturday: the experience is inoffensive and forgettable.

"Jin-a-jin" are the BluesTones's go-to syllables, repeat offenders that appear in Kiss Me and Breathe. Arrangements by group members are the weakest on the album, with incorrect chords popping up in Stuck, Inside Out, and disastrously, Redneck Woman. I was disappointed to realize that the album's strongest arrangements, Disobey, Linger, and Nothing were all arranged by non-members (respectively, producer James Gammon, forevervain.com's Stacy Lear, and Mike Harrison of Exit 245.)

The girls have big voices, but often don't know what to do with them. The soloist on a stripped-down version of Linger has a little too much attitude, changing the original song's message from vulnerable and aching into "wronged sorority girl". It's also impossible to listen to Gravity and not compare it to UCLA Awaken A Cappella's original, written and sung by Sara Bareilles. The BluesTones version lacks the original's patience and introspection. It's inappropriately paced and comes off as feel-good and unconvincing, as if the ladies never really thought about the lyrics. As for Life is a Highway, I've said it before: women shouldn't sing pop songs written for tenors without changing the key. I don't care if a group has the best alto in a cappella history. Even if she can sing every note clearly, at the proper volume with the proper resonance, she just won't evoke the same feeling. A tenor singing the chorus of Life is a Highway inspires as he belts those high notes. An alto singing the same chorus, in the same key, will be singing in her comfortable range. It's never very moving.

There are exceptions to these problems, of course. Laura Barkley's solo on Disobey, backed by an arrangement by James Gammon, is touching. It's a welcome gem on an album with so many all-female group standards. Gammon's production is also quite nice, never overpowering the girls. Any cleanup or studio magic is transparent.

For their next album, the BluesTones should reconsider their repertoire choices and spend some time studying the successful arrangements of the musicians they borrowed from on No Apologies. These ladies can use their big voices for something groundbreaking and truly special next time — something no one will expect them to apologize for.