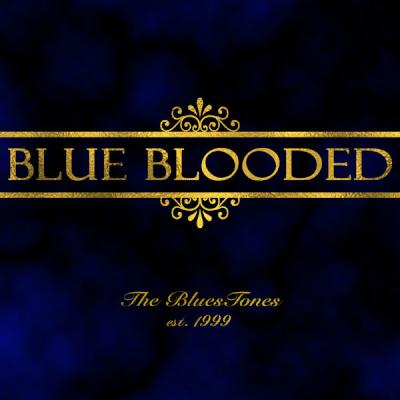 The BluesTones have a signature sound, and these ladies apply it to every song on Blue Blooded: a classic hit (Edge of Seventeen) and an older contemporary song (Yellow) don't sound out of place next to the modern pop tunes that make up most of the group's repertoire.

But a bright pop sound isn't enough to make Blue Blooded compelling as a whole: several of these songs have been covered a lot in the contemporary a cappella world, and the BluesTones don't add much to set the group's versions apart. This leads to a mid-album lull. Chasing Twisters and River sound pleasant in the moment, but they don't stick with me after they're done. Certainly, groups should perform the songs that they're most excited about — I don't expect a dozen songs that have never been performed a cappella before on every album — but listeners will lose interest with back-to-back overdone songs.

Another problem on Blue Blooded is the percussion, which is distracting: it sounds too processed (Unstoppable), and it's generally too high in the mix (Into You, Begging). The clucking sounds on Stay sound innovative at first, but then it overwhelms the rest of the song. At times, the percussion is all that stands out on a track, and I'm certain that's not what these singers intended.

The BluesTones do strike gold with Searching for a Feeling: the arrangement (courtesy of Leif Jom) builds beautifully, and the soloist and harmonies (Emily Hanbury, Emma Magner, and Kimberly McDonnell) sound perfectly angelic. It's a song that stands out on the album — the group's delivery is gorgeous, and it conveys emotion beautifully. If the BluesTones could capture that perfection on every song, they'd have a standout album; instead, Blue Blooded is a pleasant yearbook album, one that sounds lovely in the moment but doesn't leave a lasting impression.

The BluesTones are dynamite in small doses. This female group from JMU university has a knack for pop arranging and recording that is catchy and driving and brimming with vocal talent. You could take almost any subset of tracks from Blue Blooded and have a home run EP. You might come across one on a picks-of-the-year collection (no shortage of nods from the Contemporary A Cappella Society) and trip over yourself looking for more. At some point, though, simply listening to more head-turning singles becomes too much.

Thematically, Blue Blooded is about getting what you want out of a relationship. Sometimes this means taking a stand. Bass Song, Unstoppable, Chasing Twisters, and River have an air of empowerment. They are edgy, exhilarating, anthemic. Other times this means confiding, borderline pleading. Searching for a Feeling, Tell Me How, and Edge of Seventeen are wistful. While the first batch careens down highways in pursuit of romance, the second cruises down country roads daydreaming about it. Into You, Stay, and Begging are in between, with upbeat melodies overriding the tone of less-than-optimistic lyrics.

Technically, Blue Blooded is blunt. Seven of eleven songs have runtimes within a 30-second window. Four of those clock in from 03:29 to 03:33 (mm:ss). I bring this up because such rigid adherence to radio versions is a red flag for formulaic arranging. You can feel it in the seemingly endless string of choruses in Stay, Unstoppable, and River; the undecipherable layering of block chords, rhythmic syllables, and lyrical harmonies of Into You; and the utterly dynamic-less outro of Chasing Twisters. In contrast, Bass Song and Edge of Seventeen build in more narrative tension and progressive dynamics by venturing out from the AABA structure. The BluesTones are excellent at streamlined arrangements to pack a punch, but that punch gets blunted when you hear too many songs set to such a similar pace and volume.

Then there's Yellow. Yes, the Coldplay Yellow you've heard a gazillion times since 2000, but Paula Naanou has completely reimagined it with a stark choral ambiance à la Imogen Heap. And it's beautiful. The delicate honesty is a mesmerizing treat; an unexpected repose for a group typically defined by incredible soloists, percussive momentum, and compressed fortissimo.

My reaction to Blue Blooded is the same as it was to Do Not Cross a few years ago. Impressive but predictable, danceable but droning. The style is so similar that I shuffled both albums in a playlist and couldn't discern which tracks came from which recording session. The downside of this is that such great musicians are not going above and beyond to leave a lasting mark on the a cappella world. The upside is that if you have been a fan, you have every reason to continue being a fan. The BluesTones have found their sound and are showing no signs of slowing down.

The JMU BluesTones' album Blue Blooded features a nice mix of song choices: some are standard a cappella fare, and some are songs you don't hear every day. The unusual repertoire took some getting used to for this listener, but each piece is so well-executed, it is entirely worth the adjustment period.

Above all else, the first song on any album serves as a primer for the album's overall sound and Bass Song, originally by Eryn Allen Kane, is an interesting way to go about this. The song has a slow start, and the chorus is more of an extended jam than an attention-grabber. Repeat listens really endeared the song to me, and the style and beautifully-executed jazz chords serve as a good introduction to the rest of the album, but it's a bit of a slow start.

The second number, Searching for a Feeling, originally by Thirdstory, arrangement by Leif Jomuad, is more standard a cappella fare, and it draws attention to the group's impeccable blend. Songs that rely on block chords and choral-style background vocals can really expose a group's musical strengths and weaknesses, and in this case it is only strength that shines through. Searching for a Feeling, and Yellow, the album's penultimate track, are two of my favorite pieces on Blue Blooded for their flawless execution of these conceits: the blend and balance are perfect, attention is always drawn to the most interesting voice part, and the rhythmic stringency never detracts from musical expression and energy.

While the song choices are largely unusual, many of the arrangements, especially towards the middle, come off as note-for-note transcriptions of their originals. River, a standout number especially for soloist Jamiah Harrison, almost gets lost in the mix because of this.

I know the group has the capacity to back up its interesting repertoire with more innovative execution, because Yellow, an arrangement by Paula Naanou, is an excellent example of this. Naanou has taken a typical Coldplay jam, accompanied by a simple guitar pattern in rhythm and in the chord progression, and has turned it into a choral-style number with no soloist and some great suspension chords. The arrangement is beautiful, and the BluesTones pull it off flawlessly. It's also the perfect penultimate number for the album, as it spotlights the group as a unit before a more typical upbeat closer.

Each track in Blue Blooded is well-sung and worth a listen. As a straight-through album, the style starts to feel a little too uniform towards the middle, and I think song order has a little to do with this, but when the BluesTones do innovate, the group really shines.