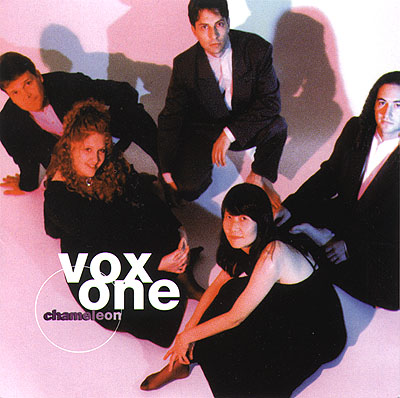 Vox One's Chameleon is a great jazz album that starts off on the wrong foot. The opening track — which happens to lend its name to the album — is dragged down into the mud by an excessive use of effects and distortions. It opens with a fake electric guitar effect that sets the wrong tone for the rest of the record. The guitar is followed by a keyboard effect that is meant to sound funky but instead sounds synthetic. Halfway through the number, they drag out a strange horn like sound. All of these effects take Vox One's normally intimate and human sound and twist it into something processed and ingenuine.

Is there something wrong with a little distortion every now and then? No, of course not. But the title track simply uses too much of it and it doesn't use it very effectively. Other songs on this CD make excellent use of Vox One's talents at instrument imitation. Little guitar and horn lines are sprinkled throughout the disc and they are usually great and sometimes even delightful.

After you get past track one, get ready to dig into nine juicy pieces of USDA Grade A jazz. Vox One delivers the goods once again. This time around, their repertoire is more focused. They still have a talent for turning unlikely songs into great jazz pieces. (This time round it's Over the Rainbow, which suddenly sounds fresh and new.) But in the past, Vox One actively sought out material from the pop world. In the past they did wonders with such songs as Respect and The Sky is Crying. Say You Love Me wallowed in cheesy soft rock songs (and turned them into guiltless pleasures). This gave Vox One a lot of crossover potential. It was jazz for pop fans. Chameleon is still very accessible, but this one is still more for the traditional jazz fan. If you don't think you like jazz, I'd recommend trying an earlier Vox One disc first, but once they've got you hooked (and they will), you should seek out a copy of Chameleon.

Vox One is an excellent vocal jazz group — their blend is superb and their intonation dead-on for that genre (more on this below). However, there is too much on this album which is not inherently jazz, but which the group performs as if it were. The group thus jumps from genre to genre (sometimes seemingly within a single song) but remains so staunchly a lizard of the jazzy stripe that it fails to match the album's namesake in blending in.

More plainly, perhaps: some of the songs are done with just too much jazz. While innovation is the keystone of interpretation, too much of what Vox One attempts here doesn't quite hang together. Lush shimmer chords are one thing (often a good thing: moments of Danny Boy are splendid). Continual changes in tempo are another — a lot of liberty is taken with syncopation, rubato and the like (disabling the same Danny Boy), so much so that I lose track of where we are and, more importantly, where we are going: a song shouldn't seem too long. Several of these do (the title track, Moonglow, Teen Town).

More interference: at times the group rocks a little harder... at least, some of the singers do. That it is only some can be a problem. Amidst a slamming rhythm section (funky bass, crisp and thumpy VP) there pops up a flat-voweled, very white lead — Barbara Streisand as the new voice of rock? This interpretive confusion leaves me confused as a listener; I can't quite make out what the group hopes to be up to. (This is a problem also with the background voices, whose characteristically well-blended but singularly bland delivery is often at odds with a more openly daring drum and bass line).

All in all, an interesting attempt by an unquestionably highly talented group of singers, but one that leaves this reviewer, at least, unconvinced.

I truly dislike anybody who rubber stamps approval of a CD (or anything for that matter). It is annoying to watch someone go through the motions of being a "yes" man when a CD has been released. God help them to have to face the large fan base and stand there trembling, left to say "it's...good?". For to say otherwise would be blasphemous. Heaven help he who is forced to kowtow to such a large throng. Therefore, I must be bold. I must have the chutzpah to stand before my fellow a cappella enthusiast and clearly define how I feel about the sound that blared forth from my speakers. Ok, I'm ready to proclaim myself to the sheep, here goes:

I'm sorry I took so long to join the flock.

I can only fawn over the incredible depth of the harmonies before I am a quivering mass of jelly. Right from the get go, Chameleon knocked me off my feet. And the fluid shift in tempo and rhythm only pigeonholed the group into the enviable position of excellence. From there on in, and probably, if not the first time, close to the first time, I was an absolute fan of vocal jazz. Unlike the previously reviewed Say You Love Me, this felt more like a jazz recording.

The track that I feel was the strongest was there arrangement of Danny Boy, which I've got to believe would make the hardest-hearted Irishman weep. Jodi Jenkins solo really struck me as solid.

It's evident to see why this album was nominated and subsequently won the Best Jazz Album CARA in 1998. And given the strong direction of this album, with a very complete set of liner notes for those who like to keep score, there is very strong indication why they were selected as Artists of the Year.

So in the end, to rap up this Vox One tribute, let me tidy things up by saying a couple of things. First: buy this CD. Second: BAA!

A huge step up from their previous effort, Say You Love Me, Vox One's Chameleon is nothing short of fantastic.

As a listener not entirely comfortable in the vocal jazz realm (though I've long admired and appreciated the vocal abilities of groups like Manhattan Transfer), I approached this album with a little caution.

I needn't have bothered. The first, eponymous track, a Herbie Hancock gem, is a deft blend of traditional vocal jazz ingredients, layered with more contemporary elements like percussion and imitative guitar sounds. Although repertoire is varied, throughout the album the song choices are excellent. Gone are the eighties college-a-cappella-ish tracks of Say You Love Me, here replaced by Coltrane, Miles Davis, and surprisingly fresh covers of Danny Boy, Moonglow, and Over the Rainbow.

Soloists are outstanding, and share lead duties admirably, both between and within songs.

Chameleon managed to make me a fan of Vox One — no mean feat in ten tracks. It might do the same for you.

I liked Vox One's Say You Love Me. I LOVE Chameleon. The only thing I can think of to complain about is the number of tracks. There were only ten!

This is also a fairly mellow CD. There are a few exceptions. Chameleon is an upbeat Japanese translated to English song on diversity. Teen Town is totally instrumental (by that I mean no words), with an awesome vocal guitar solo. All Blues and On Green Dolphin Street are jazzy.

Chameleon corrects all (there weren't many) problems with Say You Love Me. There is no out of place Christmas track. All the soloists are great. All the arrangements are interesting and complex. The liner notes tell me what I want to know.

When a group doesn't have problems with blend, pitch, arrangements, solos, percussion, production, song selection, or credits, that leaves me with little to say. I didn't like the photo on the cover. This is because suits, evening gowns and bare feet do not go together. There is also a weird shadow thing and one poor guy had part of his face cut off. But forget all that.

Get this CD. Even if you aren't a fan of this style of music, give it a try. Chameleon will surprise and delight you!