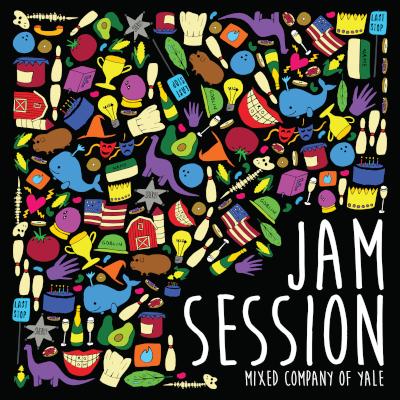 Jam Session's strengths come in bursts — a wonderful solo here, an inspiring arrangement there. But the album, when taken as a whole, is a bit inconsistent and a bit curious.

Longtime fans and RARB readers alike know this "inconsistent and curious" assessment well, as Mixed Company's last few albums earned the same badge from reviewers. For this release, Mixed Company writes, "Jam Session is the mix tape of our dreams." And I hear this — you can tell these songs are personal favorites because the group really gets into these tunes, the way you do with your own favorites. The big difference, of course, is that these favorites were recorded with a large group in a contemporary a cappella realm and not belted in your car en route to work, and Mixed Company made some curious choices with its task. Production for the first eleven tracks is quite minimal, and the arrangements are quite choral, which is totally fine as a general framework, and an approach we've heard many times from Mixed Company, but isn't always right for the specific "mix tape" song being delivered. The House Of The Rising Sun sounds ominous and empty here, like a dark poem, but never explodes to pull us into both the song and the unfolding album. The Only Exception has a nicely paired duet, but drags too much, so we're still not settling into Jam Session. Then we're presented with a cheesy dinner-theater-esque I'm Gonna Live Till I Die, and I'm just not sure what's happening anymore, but I'm not feeling a lot of jam in this jam session, and there really should be something more to latch onto by now.

But then! I'm picturing the group move from dorm couches to cool stage stools to sing If I Loved You, a foot-stomping song with much better energy and focus surrounding a great lead from Alyssa Miller. And then! The group remains on the cool stools for I'm Here, featuring an emotional lead from Dayrin Jones with plenty of exquisite phrasing and heart, under a compelling, thoughtfully-penned arrangement from Jones that knows when to get out of the soloist's way and when to holler alongside him. This one-two punch finally brings us into Jam Session.

Tracks six through eleven are adequate — perhaps more than adequate if you have a prior thing for them, as I do for Say My Name, delivered freshly here as a male duet. However, we've slipped back a bit from that nice boost we heard in tracks four and five.

But oh! Now things get super interesting, because Mixed Company suddenly employs modern production for the final three songs. The presence of these songs so dramatically and instantly thickens and excites that we're left to wonder why only these were worthy of such razzle dazzle. Though you might not care about the justification when you hear the damn fine rendition of Black Hole Sun that Mixed Company turns in, because it's equal parts divine and acid trip. Taking Chances is a guilty pleasure hit for many ("cannot like Celine Dion / so in love with Celine Dion"), and a Mixed Company tune we've heard on the group's release 7/10 Split, an album which was also plenty curious.

So here's the bottom line: Mixed Company sings its favorites musically, but does not record and present big-picture-thoughtfully. You'll like something from quirky Jam Session, but listening straight through isn't as sweet as it should be.

For a cappella purists, Jam Session may do the trick for your listening pleasure. Mixed Company of Yale's latest project does not really fall into a modern category, neither in production nor in style. While the album does have a few noteworthy moments, overall it feels inconsistent, giving most listeners few reasons to return for a second listen.

Jam Session clocks in at 48:45 with a track list of fourteen songs. While I can applaud this album for the variance in song selections, this project feels way too long. Though there are a few exceptions in the mix, many of the arrangements are missing the aspects needed to hold the listener's attention.

One of these exceptions is If I Loved You. This track provides a fundamental shift from Mixed Company's sound in relation to production, soloist, and dynamics when comparing it to the first three tracks. By the halfway point of the track, there's a sense of life added by the stomps and claps, on top of good production and a wonderful female lead.

I'm Here is a strong follow-up and draws energy from the previous track with its similar ballad style. The arrangement is well thought-out as it progressively contrasts with the movements of the soloist, almost as if it has taken on a life of its own, feeding off the emotion of the lead. When She Loved Me (from Toy Story) is similar in nature as the group feels balanced in its sound, accurately locking-in on chords. I believe that Mixed Company has a knack for showtunes or theatrical-sounding music, as this is right in the group's element.

Say My Name is ridiculously soulful with plenty of ear-catching movement from the backing group. Is it weird that I really enjoyed this with male solos? And Black Hole Sun is vastly different from the rest of the album with an array of production effects that almost feels sci-fi in nature. This coupled with the restraint shown by the female lead makes it enjoyable.

Unfortunately, these previously mentioned qualities do not embody the majority of Jam Session. Much of the really good elements are grouped in the middle, or at the very end. The first truly captivating song comes in after three tracks. In my opinion, there are times when the group should have reconsidered some decisions, such as a fuller arrangement with The House Of The Rising Sun, a few more tracks with percussion, and having a lower voice sing the lead in Feeling Good. Regarding the latter, the soloist is talented but comes off as shrill at times, especially with a key change.

Outside of this, Jam Session just lacks energy and a bigger creative spark. I wish more had been invested in fine-tuning fewer tracks instead of producing a large number. While a good effort, it's better in the sense of individual tracks rather than the complete package, and contains a few gems definitely worth exploring.

I have worked with a conductor who has a saying that reads, "I only expect one thing: everything." This is an increasingly realistic demand in recorded a cappella as studios become more advanced as well as subtle in their ability to integrate technology to simulate perfection in all popular music. There is much to be said about a group's ability to deliver multiple facets of a cappella performance within a recording. With Jam Session, Mixed Company of Yale is able to showcase some of its talented soloists and feature a couple of strong arranging choices. Unfortunately, few tracks bring the total package, and the album as a whole suffers for it.

Many of the tracks feature a particularly strong element or two but feel somehow incomplete or unfinished. For example, the idea to turn The Only Exception into a duet is strong, as it allows for more depth in the lyrics. However, the general lethargy and monotone from all the singers leaves that potential untapped. The House Of The Rising Sun is a good opener but cries for some rhythmic energy, perhaps in the form of vocal percussion, which is curiously absent. I'm Here features an excellent solo from Dayrin Jones but would do better from more musicality in the background voices, which seem suppressed by syllable choices. A strong, dynamic solo by Alyssa Miller in If I Loved You is backed up by a minimal percussion effect — what sounds like a canned bass-clap — which does not adequately support what is otherwise a high-energy track. Fortunately for Mixed Company, the positives are still discernable and enjoyable through the less ideal qualities of these tracks.

This is not the case for every track, however, as a few have more than just one or two facets missing. Tracks like I'm Gonna Live Till I Die and When She Loved Me are dangerous, for without much updating, covers of this sort are almost certain to fall flat. Without percussion, strong solo interpretation, much reverb, or particularly interesting chord choices, these dated (albeit lovely) tunes won't make much of an impact, with groups having covered them for so many years. Oft-covered tunes of recent years, Someone Like You and Feeling Good, get little love from me as well without something truly gripping and different, and more than just a male soloist on a female original in the case of the Adele hit.

The album closes with its strongest tracks, which are almost jarring in how much more effective they are than their predecessors. We finally have strong percussion! We have a mix between syllables and words with well-voiced harmonies! We have reverb, and not too much! Soloists making interpretive choices that are tangibly felt in each note! The studio work and arranging are spectacular on Electric Love and Black Hole Sun, and duettists Meg Guzulescu and Aaron McAleavey stand as prime examples of high-quality storytelling through popular music.

While Jam Session is certainly lopsided, there are many of its pieces to appreciate. If not the entire album, I strongly recommend picking up the last few tracks and a couple more. It is my hope that the end of this album is a sign of great things to come for Mixed Company.

Jam Session is streaming on Spotify.