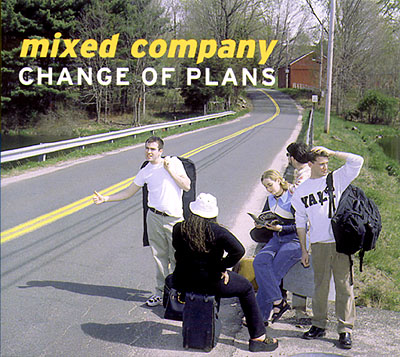 Mixed Company's album is entitled "Change of Plans". I wish that it had a bit more of both of those things. As it stands, the disc lacks both innovation (change) and, to a lesser degree, organization (plans).

Although the group deserves kudos for some of their song choices, others are uninspired. For every unusual Ghost, there are two uninteresting or awkwardly interpreted tracks (Don't Let Your Heart and Zombie Jamboree are both important in the history of contemporary a cappella, but by the same token old and, here, slowed down too much). And no a cappella fan should any longer consider it innovative to switch the sexes on solos.

Speaking of solos, or rather of soloists, brings us back to plans. Many of the soloists sound classically trained — in some ways a good thing but bringing with it a heavy load of seemingly inescapable vowels and vibrato inappropriate for pop. Other solos are simply oversung (Lullabye). All in all, in this area I would have liked to see more strategic use of voices, with tone complementing rather than combating interpretation.

A lack of innovation and inexpert planning should perhaps not be damning for a collegiate group. Whatever the truth of the matter, though, the result is that Mixed Company sounds young — trying very hard but not quite reaching the mark, and sometimes shooting past in unwanted directions. But even the "fire of youth" is absent, tempered somehow (too much classicism?). This album may thus not appeal to many outside of the local and loyal fan base.

The Yale Mixed Company web site says that when the group was formed in 1981, they vowed "to set the world free from the shackles of dry, boring a cappella". After listening to Change in Plans, however, I find little of that revolutionary spirit left in this 19-year old group. In fact, just looking at the track list on this album, my first was, "Kind of your traditional Ivy League a cappella group, isn't it?".

Kat Duffy does a fabulous take of Sarah McLaughlin's Vox and Maiya Sykes delivers a powerful Shadowland, but for the most part, the solos on Change In Plans are just blah. I mean, to give them credit, nearly all of their soloists are good singers. They're capable of vibrato, they breathe well, and they infuse their songs with emotion. But they're all just....lacking something. That extra special touch that makes your spine tingle. That crazy passion that makes the hair stand up on your arms. They seem to sing out of their nose a lot. The tone and timbre are thin and tinny. Yeah, that's it. Of course, maybe the vocalists themselves are bored of singing a cappella done-to-death songs like, Don't Let Your Heart, 29 Ways, Up The Ladder, Zombie Jamboree, and of late, Seasons of Love.

There are quite a few live tracks on this album, which is a daring, but well done, touch. The live recordings are generally very high quality and contain very few of the tuning errors too often found in live tracks.

In general, there are enough a cappella cliches and novelty tracks to significantly lower this album's repeat listenability score for me (the campy Don't You Worry Bout A Thing and dorky McDonald's Girl get old after the first couple spins). While there are a few delightful surprises (Once On This Island's Waiting for Life, the soulful Shadowland, a haunting Pretending to Care) Mixed Company's fourth album breaks no boundaries and leaves me feeling more listless than freed.

If the Musical Theatre department of my good old Alma Mater were to put together an a cappella group it would sound like Mixed Company. Complete with their perfect diction and a cappella hits from the early nineties, Mixed Company's — Change of Plans sounds pretty plain and pretty much bored the hell out of me.

My first experience with this CD was not a great one. As soon as I opened their interesting CD packaging (no jewel case for this jewel), it fell apart. The hot glue securing the booklet into the cardboard case had decided to relinquish it's duties and release the enslaved booklet onto my floor...

Once I got through the mourning, for the loss of the booklet, I put the CD into my player to find a recording that surprised me in many ways. These guys covered all bases when trying to sing the overdone a cappella hits: Hodja, Up the Ladder, Taco Bell Canon, and 29 Ways. Of course, you can't forget the Spike-Lee's-Do-It-A-Cappella favorites: Don't Let Your Heart and Zombie Jamboree. Debbie Allen would be proud. FIERCE!

I've checked their vitals and they're all good: pitch, rhythm, solos, etc. Everything sounds fine. Although, their enunciation and vibrato are a little too much for me. And of course, almost all tracks come complete with their very own old-school vocal percussion, boom-chika-boom.

Production quality for the studios tracks is good. The live tracks vary from sounding fine to sounding just awful. Someone dropped their keys VERY LOUDLY in a quiet part of Shadowland. And would someone PLEEEASE compress the lead on this track. You almost blew my ears off (and not in a good way). When choosing which live tracks to use on an album, try to pick one that doesn't have random audience applause and shouts in the middle, it just sounds awful. If a track doesn't sound good, you're not required to use it.

So that pretty much sums it up. This album sounds like a bunch of collegiate a cappella albums I owned in 1992. The singing is good but VERY theatre-y.

If you are friends/family/fans of this year's Yale Mixed Company, then this is the album for you. For the rest of the a cappella world, though, I wouldn't recommend it.

Overall, the production of this album isn't bad, but there's nothing new or exciting here. The soloists are fine as well, but are often overshadowed by pitch problems and a lack of energy due to boring arrangements.

While reading the liner notes, I noticed that most of the 22 tracks were arranged by former members of the group. It turns out that past recordings by the same group have many of the same songs on them. Like I've said before, old favorites are good for live performances, but when it comes to recording, the fresher the better.

There is also the problem of the live tracks. While crowd enthusiasm helps group energy it is often distracting when recorded. When listening to a CD, I want to hear the music, not the random girl-sitting-too-close-to-the-microphone screaming for a cute guy, or the freshman year roommate yelling "Steevo!" from across the room in the middle of a song (unless I knew who Steevo was). It also makes me feel like I'm missing out on something interesting that's happening on stage.

Like I said earlier, this is a great album for the fans of the group, but for everyone else, this is just a collection of boring arrangements to songs you've already heard. Sorry Steevo.

Yale Mixed Company's Change of Plans is an interesting album in several ways.

First: Tossing aside the traditional jewel case, they used a one fold cardboard booklet with a folding plastic CD holder on the right side that snaps shut. Their booklet was gummed in to the right side of the cardboard and had (GASP) ten panels and the only black and white was in the two panels of individual photographs — which looks better anyway IMHO. I was just sad for the five people who were not pictured. Why?

Second: Many groups rely on vocal percussion to hide poor vocals and add energy to a song. Mixed Company has wonderful energy without VP, Up the Ladder in particular. The VP on this album was mediocre at best, but was used quite sparingly thank goodness.

Third: At a school with tons of groups, each with their own special niche, Mixed Company manages to retain diversity in their music. They've got old stuff, new stuff, humorous stuff, etc. My favorite track was McDonald's Girl. I'll be looking for it on the next BOCA Humor.

Unfortunately the powers that be in Mixed Company saw fit to include Zombie Jamboree as their final track. I think every collegiate a cappella group should get a booklet of songs not to do, and Zombie Jamboree would be number one, with Lion Sleeps Tonight a close second. The arrangements were also average, none struck me as particularly innovative or complex.

The production was very conservative, and just about par for the course. The soprano section was often high in the mix, and some soloists overpowered the background. The blend wasn't that great in the duos, trios and quartets, especially Taco Bell Canon.

There were 22 songs on this CD. There are some, mostly live tracks, which could have been cut from the album and no one would notice except perhaps that song's arranger and the soloist. I hate to sound Machiavellian, but sometimes things must be done for the best of the group. Live tracks save money, but Mixed Company doesn't seem to be short of cash (their huge colorful booklet is a sign) and has plenty of songs to use. Leave them off next time!

If you have some connection to Mixed Company, then you would want to buy this album. If not, wait for their next one. With a little more freedom in production, and using fewer songs of higher quality, their next album should be great.