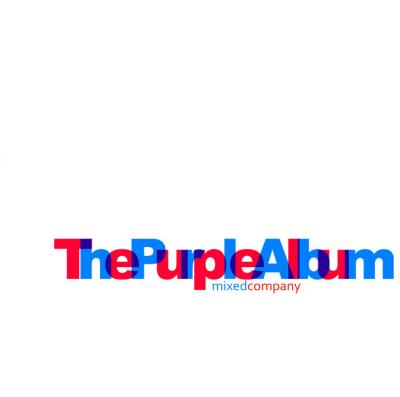 I've never reviewed an album from Yale Mixed Company but I've known their work for a while now. They remind me of some of the groups I recall from my late high school and early college years when collegiate a cappella was often defined as much by the fun, the humor and camaraderie as by the music-making itself. That must make it a lot of fun to be a member of Mixed Company but for those of us who might want to buy their CD, it's no blessing to sound like you're stuck in the late '80s.

Pretty much without exception, there isn't an arrangement to be found on this album that couldn't be called rudimentary. Typically, you don't get more than a choral block moving essentially in unison on variations of "ooh" and "ahh", with a bass line and perhaps some vp underneath the solo. Maybe one counterpoint part in the sopranos or the tenors singing a rhythm line against the block chords. That doesn't make them "bad" arrangements per se, and in songs like Shadowland, The Song of Purple Summer and Seasons of Love — not coincidentally all show tunes — it can be decently effective. But more often than not, it's music-making without such unsophisticated interpretation that it renders the music itself uninteresting and unengaging for the listener.

Thankfully, all this simplicity is recorded quite well. Editing by Ed Boyer and mixing and mastering from Bill Hare make the first and only time you're likely to listen to this album — unless you're a friend, family member or alum of the group — pleasant enough.

Actually, I should qualify that, too, because at 20 songs, your patience will be tested. Then again, at least half the album is material the group has recorded previously — in some cases, as recently as its previous album! — so if you only listen to the new stuff, the album will clock in at a far more reasonable length.

What can I say to be encouraging? Well, there are faint glimmers of more interesting arranging to be found in Two Points for Honesty from Ian Janer and Trouble Sleeping from Ted Gibson so perhaps the group is willing to embrace a more complex, layered sound with a few more moving parts and varying syllables. Based on prior RARB reviews, solos have been an issue for this group in the past and especially the first half of this CD didn't give me much hope that anything had changed as the solos range from timid (Hodja) to pushing too hard and/or shrill (You're All I Need to Get By) to pitchy (Someone to Fall Back On, Follow Through) to overly earnest and legit (even for showtunes!). But the back half of the album gives me some faith courtesy of Sei Young Pyo's lusty alto on Ghost, Gabi Tororello's Stars and the Moon and especially Jenny Baik on Pretending to Care and whoever does the final soprano riffs (Allyson Lieberman, I think) in Seasons of Love.

It's hard to offer constructive advice for Mixed Company moving forward because they clearly are quite devoted to the type of music they sing, the basic style in which they sing it, and repeating the same material from CD to CD. It's not for me to say it's "a shame", but if I had my druthers, I'd love to see them channel all of their passion, energy and enthusiasm into creating 8-10 fantastic songs for their next CD rather than another album of 20 mediocre tracks, half of which we've heard before.

What a difference two years makes! Evident from the first beat of Hodja, you can tell that The Mixed Company of Yale University is nearly ready to play in the big kids' pool while holding steady with their traditional sound. The musicality of the group has matured, evidenced by stellar blending and excellent intonation among the sections, so the tracks sound just as you'd expect them to live on a perfect, acoustical night. Thanks surely go to Bill Hare and Ed Boyer, who have both added production qualities that make The Purple Album worth owning by any fan of a cappella music. Here's to old-school singing mixed with rich production that helps make the songs soar. I would love to hear what the power producers would deliver if they were given the freedom to really push this group to the next level.

While the arrangements haven't changed any, sometimes (well most times, really) it's not about how intricate they are, but how well they are constructed, how committed the performers are to the piece and how well they are sung. All of Mixed Company's arrangements are simplistic, yet very effective. It's like each subsequent music director takes the potential arranger and schools them in the art of making a Mixed Company chart. Whether it's Guffey in '87 to Gibson in '10, each chart sounds like it could have come from the same person and has that signature Mixed Company quality.

The album almost garnered a "5" because the songs that are top-notch are excellent and there are a bunch of musical theater pieces included. Kudos for that. And they definitely get bonus consideration for naming their disc after my favorite color, with CD art that perfectly blends the male and female. The theme carries over to the quality of the soloists as well, The women are still stars, but the men more than hold their own. In fact, Scott Hillier's rich baritone completely enlivens Jason Robert Brown's epic Someone to Fall Back On and is just barely outdone by Jenny Baik's lush and emotionally charged Pretending to Care. Both of them are on permanent rotation on my Palm Pre. If I liked "The Lion King" (long story), Shadowland would also be included in that mix. Allison Bruff is one of the most passionate singers I've ever heard! Talking about a song that revs the heart with pride.

With a two-year delay between releases though, it did mean that the group decided to double up the tracks with a whopping 20 included on this album — six more than their previous release Dashboard Buddha. That was a negative regression as some of the songs don't really merit inclusion on the album and weigh down the overall appeal.

The Song of Purple Summer, as much as I love the inclusion of all these musical theater pieces, hasn't settled enough in the group's voices. There are a lot of tempo discrepancies between the vocal parts and the tuning suffers a lot. Stars and the Moon is a bit too affected to stomach more than once. Seasons of Love doesn't seem to have the emotional connection for kids who were 4 to 7 years old when the musical debuted — it definitely lacked the punch to close out the album. The need for upbeat and peppy tracks on an album notwithstanding, McDonald's Girl is just a crappy song. And living in Memphis now, I hear a lot of Walking in Memphis and this one doesn't stand up well against the others.

Full disclosure, this album solidified the fact that I wanna be a Gump. The Purple Album is a great indicator of what having a rich musical tradition in the collegiate a cappella sphere is all about. Here's to continued successful recordings.

The latest album from Mixed Company of Yale is, for lack of a better term, aggressively average. Average because the track list ranges from incredibly overdone (Walking in Memphis, The Luckiest, Two Points for Honesty) to boring (Someone to Fall Back On, Pretending to Care), with waaaay too much musical theater thrown into the mix (Stars and the Moon, Seasons of Love, The Song of Purple Summer). I say aggressive because, though I just listed eight songs, I've yet to mention even half of the album.

That's right: The Purple Album stretches on and on into a collection of no less than 20 songs! I have to strain to think of any group, a cappella or otherwise, which could release a fully enjoyable album of 20 tracks. The fact that The Purple Album treads absolutely no new ground and seems to have no semblance of thematic cohesiveness makes it almost impossible to listen to in one sitting.

The sad truth is that if this album were shorter it would have been, if not groundbreaking, at least a pleasant listen. Most tracks are well sung and have enough gusto for an average rating from me were I listening to each on its own. As an album, however, the whole thing gets far too tedious.

The best way I can describe this album is that it's as though your friend gave you a mix tape of his or her favorite songs. The tape has no common theme holding it together (e.g., favorite rock songs, pop songs, or show tunes), it's simply just a bunch of songs your friend likes arranged in no particular order. Now imagine that the tape isn't even the original versions of the songs, but recordings of other unknown musicians performing the music with virtually the same arrangements, and delivery that mimics the original singer. The mix tape has no flow, and you don't even get to enjoy the nostalgia factor of a song you might recognize. That's the experience of The Purple Album.

My advice to the group is advice I've given many times before: be pickier about what you put on your album! The vast majority of people who are going to listen to your work would rather hear 10 excellent songs that fit well together than 20 average ones that have no common sound or theme. The Purple Album suggests that Mixed Company may have the talent to come up with a really good album. They just need to do a much better job of refining their material and making sure to put their best foot forward for their listeners.