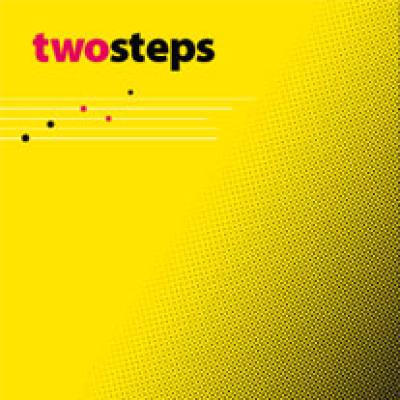 Doing Justice by Yale's Mixed Company was the first co-ed a cappella album I ever heard and I ever owned. I remember sitting in my dorm lounge with a hallmate on December 12 during the fall of 1990 (I wrote the date on the cassette label) and listening to the album over and over. I vaguely remember her telling me that her sister was in this group at Yale, but I do strongly remember being completely blown away by what was coming out of the speakers.

Flash forward 16 years and the same feelings all come rushing back to me. In listening to Two Steps, I am reminded of what sound fundamentals in musicianship, emotive soloists and unadorned choral singing can do for a recording. The group's latest album is a testament to what quality a cappella is all about.

The first three tracks make a very strong opening. Hodja has a great jazz influence. The passing of the solo between male and female voices brings to mind the first time I heard the Columbia Clefhangers bring down the house with a similar take on Moondance at an Old Well Sing that the UNC Clef Hangers (hey, note the spelling difference?) hosted. Shadowland should have at least garnered a soloist nomination for Whitney Grolig. Her alto vocals are as evocative as Heather Headley's version on the original cast recording and swells me up with as much pride as William and Mary's DoubleTake's does. The live recording of The Luckiest is simple and sweet and nearly seamless in transition sandwiched between two studio tracks.

Where the album falters is length, consistent production values, and the male soloists. That sounds like a lot of problems but bear with me.

The album is at least 8 tracks too long. That's very hard for me to say because I am firmly rooted in representative solo spreading. They pack a lot of music onto the disc, and unfortunately aren't up to the challenge of sustaining a consistently high level of excellence throughout the disc. But when they click, they click hard.

Replicating the acoustics of chapel singing on some of the studio tracks in the middle of the disc does a disservice to the overall quality of the recording. Most of the songs are top-heavy, but not unpleasantly unbalanced. There is a unified block sound, but some songs needed more studio wizardry for more testosterone in the sound. Mona Lisa, Dancing Virginia and Walking In Memphis are especially troublesome from a lack of presence in the basses. Though, on the flip side, that same engineering decision makes So Simple one of the best songs that I've heard this year.

Across the board the women are powerhouse vocalists. They bear the burden of some average arrangements with an effortless command of talent and prowess. Unfortunately, the same can't be said for the gents. Often their arrangements are better, yet their voices sound pinched and thin. The guys in the group are young and it's reflected in their solos. The notable exception is former music director Aaron Lambert. His turn on Where Did I Go Wrong? was, in short, remarkable.

If you are a fan of natural recordings, it goes without saying that you should own this disc. If you are in the least bit interested in what "real" collegiate a cappella singing sounds like, Two Steps is the album for you. Here's to another 25+ years of making great Mixed Company music.

A refreshingly diverse track list and a live-in-studio feel make Two Steps a nice departure from what might have otherwise been a dismal failure. With the inclusion of four Broadway show tunes (and how I wish other groups would follow in Mixed Company's steps!) and other non-typical a cappella fare, the album brings a fresh sound to these choral-style arrangements, which are particularly well-suited to the repertoire. Save for the hollow, church chapel echo on most tracks, I rather enjoyed this simple, well-rounded album with a full 20 tracks.

As someone who can claim that the only thing she knows more about than a cappella reviewing is Broadway and musical theater, I feel compelled to discuss the four aforementioned show tunes. With its lush harmonies, The Lion King's Shadowland lends itself well to a cappella, although I might have chosen different piece (Endless Night or even One by One — an a cappella song itself) that better captures the sense of African rhythm and complex tonal execution. Nevertheless, while soloist Whitney Grolig is no Heather Headley, she brings to the melody a convincing and emotional performance. The lack of vocal percussion and solid bass leads to a quickening of the tempo and an emptiness at the climax of the piece.

Next up, Godspell's (that's two "L"s, by the way, Mixed Company; it was spelled wrong in the liner notes) By My Side, a lovely, poignant piece that unfortunately also requires a steady tempo-keeper, like the acoustic guitar in the original. The guitar is not quite what's missing from the Mixed Company arrangement, but the song improves noticeably once the men's voices come in to provide quarter-note structure to the tempo and chords. As the various voices enter and leave at various points, the intended dissonance grows increasingly more difficult to achieve.

I love the inclusion of Leaving's Not the Only Way To Go, one of the final numbers in the lesser-known musical Big River, about the adventures of Huckleberry Finn. Such a powerful piece eloquently arranged by a 1997 alum Adam Blau, LNTOWTG's strength is slightly lessened by a less-than-perfect lead, but the song is concluded well in the second-to-last bar with a sorrowful soprano fermata that ties the whole song together.

And finally, the better-known Seasons of Love, a weak interpretation of the Rent masterpiece that changes tempo, has awkward pauses, and a dreadful, overbearing "measure your life in love" in which the female lead actually seems to take a breath in the middle of the word "love". I don't think anything could top the Indiana University Ladies First's version of this song off their 2001 album Ticket to Anywhere, and that one was recorded live in concert.

The non-show tune pieces fare between mediocre and good, and for the most part, soloists are strong, with the women making a much better showing than the men. A lot of what remains after the show tunes are pop and alternative offerings arranged into contemporary easy listening. So Simple and Ready for Love are two stand-outs. The music is somewhat ephemeral, often soothing, and at times a bumpy ride, but these songs don't necessarily struggle because of their arrangements. The music isn't lost under ego-driven, overdramatic performances, and therefore Two Steps is an earnest, comfortable effort that should serve as good preparation for the group's next release.

I've been saying this more and more lately, but I'll say it here too. Two Steps is too long and would better serve the group as two albums. Twenty-one tracks is hard to actively listen to no matter what the quality of the group is. I consistently need a mental break around track ten or a half an hour, whichever comes first, and albums that coincide with that fatigue leave me with a tidy feeling of closure and make me want to listen again once I've recharged. I could be listening to Rockapellaclockshadoxone and be loving the album, but at a certain point I'm going start thinking, "Another song? C'mon, I know you're good, but let's wrap it up, ok?"

That being said, Mixed Company seems to have found its voice but may not have realized it yet. The album is recorded with a very live and open feel and they sing with a traditional choral sound rather than the layered/processed sound of most contemporary a cappella. Mixed Company does the former well and capitalizes on it with songs like Shadowland, The Luckiest, Satellites and By My Side. The singers of Mixed Company impress with the ability to sing solos with flair and character with one song and then completely disappear into the other voices in the next. It's great to hear a group so aware of their ensemble sound as to create a completely unified tone. This is another strength of a strong choral foundation. However, when the group attempts to leave this niche the quality drops a notch.

Let me say this clearly for everyone reading this: every part is equally important because any part can diminish the whole product if it's poor. I think it's great that live drumming is here, but one or two more drummers in McDonalds Girl would have been very useful for sharing the load. Brand New Day would have been just as good without the drumming although this time it was much more in control.

Speaking of Brand New Day, I know it was just showing off the girls like #41 showcases the guys, but a tonic pedal in a bass voice between 2:20 and 2:35, or the second to last refrain before the cadenza, would have really made this track a hit with me. The girls do a great job on their own building intensity, but try that out in a rehearsal and see if it doesn't put the final touch on all the energy those girls cultivate in the rest of the song.

Going back to McDonalds Girl for a second, maybe I'm missing a visual element this song on stage that ties it all together, but it wasn't funny to me. It either wasn't over the top absurd enough or serious enough to be completely sarcastic. By riding the fence it was just happy-go-lucky cutesy, not comedy.

Walking In Memphis and Seasons Of Love both suffered from similar problems. While Walking In Memphis isn't as strong as other renditions I've heard, it was doing well until it changed keys when everything got thin. The perfect unison adds punch with pure volume and the impression of a large congregation of people singing, which was great for the first measure, but after that the groove and consequent "wow factor" dissipated. This was only one time in Walking, but in Seasons Of Love this happened at every chorus. This could have been the feel-good, house-rocking closer that it was intended to be, but the tempo felt slower than the choruses, the tone became softer and warmer, there is an abrupt short crescendo in the middle of "love", and there needed to be a more supportive rhythm section through the entire song. The solos here were passionate and energetic, which made the lack of support that much more unsatisfying.

Basically, Mixed Company has to figure out how to make whatever song they sing adapt to their style and strengths rather than trying to change themselves to fit the song.

To order this or any other Mixed Company album, visit the group's website.