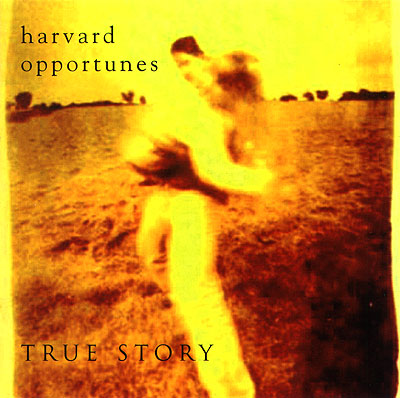 True Story is a singer's outlet, a showcase for ideas and attempts and arrangements and talent. What it isn't is a satisfying listen for a stranger — too much going on, too few slam dunks and an opening montage that loses the audience before they have been won over.

Let the Music Play was one of the longer eight minutes of my a cappella life — half a song followed by a collection of seemingly unrelated snippets, sung by unidentified singers and moving toward an unidentified end. It was like a hidden track that goes on and on and on, but it was first, and it alienated me even as I tried to appreciate the skill and care that went into each individual snippet and figure out how the piece went together.

These kids can sing, I'll gladly credit them for that. I also found a number of their arrangements to be well-conceived and reasonably interesting — although this is not as unusual in the collegiate world as it once was, it still deserves notice and appreciation. I particularly liked Water and the slight twist that graces the chorus of Father Figure. Where the arrangements are bland (like the pro forma disco Best of My Love) there are usually other redeeming features, like lush choruses (disco again) or a velvet solo (Dan Berwick, Steve Sandvoss).

It's the sort of thing I'd expect out of a hobby group from Harvard. Students there are too well-rounded and too talented to put out sludge, and they clear that bar easily. True Story is a nice piece of work that admirably showcases their talents for family, friends and fans. What it doesn't have is a hook that says why the rest of the a cappella world should look up and do more than wave hello. And why should it need to? The Opportunes are fine on their own.

Imagine going to the Carnegie Deli and ordering a pastrami on white bread. True Story, the new Harvard Opportunes CD, is a lot like that — it's big and beefy, but why is all the good stuff sandwiched between two flimsy and flavorless pieces of junk? At one end of the album is track 1. The nearly 8 minute long medley is a disjointed montage of an absurd amount of songs. There are occasional attempts to make everything center around the song Let the Music Play, but that theme disappears for huge stretches of time. The overall effect is like constantly changing radio stations. The fact that some of the snippets are well executed only makes you wish that they would stick with them for the length of a whole song instead of quantum leaping into the next bit. I bet it gets lots of cheering when they do this medley in concert just for the recognition factor of all the songs ("Oh, that's the Barenaked Ladies! That's the Sunscreen Song!"), but that doesn't cut it on an album.

At the other end of the album we have the Star Spangled Banner. If they're auditioning for gigs at sporting events, couldn't they just save it for their demo tape? And don't they know that the only time to sing that song is at the START of an event, not the end? Shenandoah, which pops up in the middle of the CD, left me feeling proud and patriotic. The Star Spangled Banner just left me feeling puzzled as to how it made it on the CD. A truly anti-climactic closing track.

Bad first track. Bad last track. Ah, but the stuff they put in between! Some of the soloists — particularly towards the beginning of the album — aren't the strongest, but once the CD finds its pace there are some truly worthy cuts here. When We Were Kings may make you stand up and cheer in the privacy of your own home. It's a heartfelt performance and the harmonies are spectacular. They follow it up with Change in My Life, a song you've already heard done a cappella by a little group called Rockapella. It's generally stupid for a college group to sing a song that was already a cappella in it's most famous incarnation, and it's even more stupid to have that song follow a great cut like When We Were Kings. The Opportunes do both and, miraculously, it turns out that it's not a stupid decision at all! (I guess there's a good reason they go to Harvard.) Their arrangement is arguably one of the best the song has had. Another stand out cut is the haunting Breathe. The applause at the end of this live recording breaks the mood (which is a shame because it could have easily been edited out), but it's still an effective piece and I'm glad they rerecorded it for this album. The vocal percussion on True Story is consistently laudable and lends the best tracks a professional sound.

The Harvard Opportunes have put together a puzzling album. Giving it an overall rating is difficult, because the tracks vary so much in quality. Some are solid, with passable leads, and nice moments of blend and balance. But then, every third song or so swings the other way. Tuning problems, very weak leads, odd lurches in tempo. Actually, the first track, a massive medley of circa 1999-ish pop radio fare wrapped into the '80s anthem Let the Music Play, is a reasonable facsimile of the rest of the album. It works, then it doesn't. Then it works again.

For the most part True Story works. So I am left thinking that they should have left the occasional weaker song off the album. With sixteen tracks (an hour of music) this recording could stand to lose a little weight. Sadly for me, my two favorite songs on the disc, Sting's Mad About You and Tears for Fears' Everybody Wants to Rule the World, feature two of the weaker leads, and should be the first to go. Losing Best of My Love wouldn't hurt my feelings either. The choral belting by the sopranos near the end is almost comical.

That would leave plenty of good work, and a few quality performances, including the surprising Father Figure, with an outstanding solo by Jason McNeely. Vered Metson also deserves note for her very believable pleading on Queen's Somebody to Love. And, even though many of the songs are slightly marred by errors in technical execution (tuning, tempo, blend, balance) there is still a noteworthy musicality coming through. The performers seem to have a good understanding of the mood of each piece. Mercy Street, though flawed, captures the reverence of Peter Gabriel's original. Change in My Life has great dynamic contrast and builds to the end, rivaling the energy of Rockapella's recordings.

It's a good album, in spots, but I had to hit the skip button a few too many times. The net result is something a bit more average.

This is what a collegiate a cappella album should be. While it's not perfect, there are many good things going on. There is also room to learn and improve with the next project.

Each song is very energetic with close attention paid to tuning and blend. The soloists also add that extra push to really enhance the overall quality. Each one has the right voice quality and range for their particular songs. I'd also like to point out that Somebody to Love is the best a cappella Queen that I've ever heard. If this album was just that song, it'd be worth having. I also enjoyed Breathe, which was recorded live. This was probably the most honest sounding song and really showed what this group can do.

The major problems that I had with this album really didn't have to much to do with the group's performance, but more with some of the choices that were made. For example, the first track had me totally baffled. I looked at the title (Let the Music Play) and thought I knew what to expect. Then I noticed that the track was 7 minutes and 51 seconds long. It's actually a collage of songs that, to me, didn't seem to have any connection. They didn't even sound like they were recorded in the order that they came in, but, instead, recorded separately from each other and thrown together. I would have rather heard one song completely than this mess of disconnected snippets.

I felt like a lot of the songs were overproduced as well. The extreme use of reverb on Oh! Darling makes it almost unbearable to listen to. While sometimes reverb is nice (Father Figure) on Oh! Darling, it was too much. It also sounds like something was done to the bass and percussion lines. I'm not sure what exactly, but they seemed a little muddy and disconnected from the rest of the parts.

Overall, this is a really good album and would recommend it fully. It's definitely a good enough album to listen to again. I also think that any collegiate group could benefit from this by listening to all the good things while learning from the mistakes.

The Harvard Opportunes open True Story with one of the more enjoyable, varied medleys I've heard in ages. Almost eight minutes of music packs in virtually everyone from Celine Dion to Eminem — it's fresh and fun. Sure, I've seen this type of thing, maybe even better examples of it, but the track grabbed me and got me really excited about the rest of the album.

Unfortunately, virtually everything following was so typical of middle-of-the-road college a cappella that I couldn't help but feel let down. Repertoire ranged from pop song choices that try to strike a balance between obscurity and popularity (B-sides from hit artists), to the way-standard Up the Ladder to the Roof, Mercy Street, and, mysteriously, The Star-Spangled Banner as a closing track (although the syncopated, jazzy arrangement is outstanding).

The album is inconsistent in other ways — the production choices vary song-to-song, and the tone of the group alters throughout as a result of the changing lineup (True Story is actually the recordings of the '97-'98 group in addition to the '98-'99 group).

There are some high points. Christie Yih is delightful on her own arrangement of Martika's Like Water, and Jason McNeely out-does George Michael on Father Figure. Further kudos to the whole group for a sensitive live rendition of Breathe.

College groups don't choose songs to make an album — they choose songs the members like, songs they need for gigs, songs they sing at public events, and if they all end up sounding good, then they record them. So I can't fault the Opportunes for not creating an album as inspired as the opening track. But this group can really sing, and their closing song proves there is solid directing capability among their number. Providing they can choose, arrange, and record a few more tracks with the wit, imagination and energy of Let the Music Play, then this group will be destined for great things.