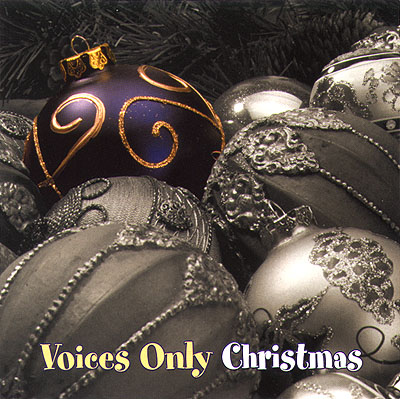 Oh, Christmas! Obvious rejoinder to a sampler such as this, which reeks of the holidays much like NASCAR reeks of auto fuel. Except that after listening to about half the CD, the reflex response changes. Ohhhh... Christmas.

Steady there, boys. It's just the latest Primarily A Cappella Sampler. And as a concept album, the only thing I'd use it for is a radio archive. There's a lot of great stuff on here, but I am unlikely to want to listen to more than a few chunks of it in any one sitting.

This CD wins the novel distinction of being the first a cappella sampler that is too diverse for me. I was quite pleased with the Best of Harmony Sweepstakes CD, which runs the stylistic gamut. I like my Best o' the CARAs compilations and am famous for my wildly diverse homemade mix tapes.

I think the problem here is that it's, again, Christmas music. I like Christmas music in two flavors, and two flavors only: serious classical stuff, and jazzy background music for parties and the mall. This CD has some of both, plus doo-wop, novelty and contemporary Christian. (Yes, you can tell a contemporary Christian Christmas song from a regular Christmas song. For example, see Naturally Seven's Bless this House. And they are distributed so that no song is back to back with another from its same genre.

The EDLOS are superb with their Sim Shalom (serious classical music, from a different branch of the Judeo-Christian tradition). It deserves a 6. The Swingle Singers have another quintessentially classic Christmas set opening the disc, and Chanticleer's In Dulci Jubilo is a lovely closer. From the jazz angle, I liked the First Call cut quite a bit, and I believe we have already written about the joys of Acoustix during the holidays.

GLAD, The Blenders, the Accidentals, ReGeneration, Just 4 Kicks and Vox Bop will be fine for the mall. The m-pact cut is a lot of fun, but if you're into that stuff you should just buy their whole Christmas CD and be done with it. Oh, and I dig Charlie Brown Christmas — if you do too, you should go find Hampton Avenue's version somewhere.

As for the sampler? I think it's got a good market for radio stations, distributors, and serious collectors who want to scout out what has hit the market. Being as it's Christmas music and all, the rest of us will want something more tailored to our particular holiday niche.

Well this is a no-brainer. Are you looking for a collection of various Christmas holiday music performed in the a cappella way? If so, get this album. Primarily A Cappella last year put together a collection called Voices Only Christmas. It is a winner. With groups like m-pact, The Blenders, GLAD, and Chanticleer (and lots of others to boot) you really can't go wrong. A wonderfully produced set of songs performed by the best in the a cappella world. Man, this is easy.

There are some very common holiday songs, many not performed in very typical ways. Some are arrangements that you may never have heard before, but you will listen to again and again. The Blenders version of The Christmas Song is perfectly Blenders: a tasty pop production. m-pact's Caroling, Caroling (from The Carol Commission) is just killer. The EDLOS even throw in a Jewish holiday song in Sim Shalom that is beautiful and moving. To finish the album is three of the best groups there are right now in their respective specialties: GLAD singing O Come All Ye Faithful; The Real Group with a gorgeous Swedish version of Silent Night (Stilla Natt); and the incomparable Chanticleer performing In Dulci Jubilo.

I am telling you, you can't do better than this when it comes to a broad variety of a cappella Christmas music. If you want something like this, just get it. It is worth every penny.

I am a bit of Grinch. Not only am I a Christmas skeptic in general, but I particularly dislike the faux-heartfelt-shmooze-ridden style pervading the music of this White Season. Now I'm also not too crazy about the "new, hip" Christmas songs that feign pop sensibility when, in fact, they're just as cheddar-covered as the rest. So basically, except for a rare track here and there, Christmas music is just completely trite.

That's why Voices Only Christmas is such a great CD. On the whole, the songs are so beautifully sung, and so creatively arranged that even where you might think, "This isn't really my kind of music," you still follow that thought with, "but it's amazing!"

But if you tend to like Christmas music, you've totally hit the jackpot. Blend, phrasing, soloists, timing, production- all are first rate. Just look at the groups: Swingle Singers, The Blenders, Naturally Seven, m-pact, Acoustix, the Real Group and Chanticleer, to name only a few. These names raise expectations and the listener is not disappointed.

There are certainly gradations; I let the numerical scores indicate this. But once the spirit hits you, you probably won't notice the little dips in quality. Voices Only Christmas' worst moments are still sure to please many a listener. If ya gotta listen to Christmas music, it might as well be the best.

This is mostly a very nice compilation of a cappella Christmas music. Voices Only Christmas is yet another compilational release from Primarily A Cappella. All of the tracks seem appropriate except the beautifully performed, but anathematic, track from The EDLOS, Sim Shalom. Now upon first listen many people might not realize what this song is, a Jewish prayer that is not a Christmas song. Granted, the general meaning of the prayer is asking to "Grant peace, well-being and blessing unto the world..." and the general idea of Christmas is "peace on earth...," so I can see a slight similarity. The only people who are likely to know this prayer are Jewish people, who are probably not going to be buying this album. So basically, the song sounds wonderful but I don't think it belongs on this compilation.

Another little thing that bothered me was the line in the Vox Bop track that said, "...but we get so tired of the same damned old arrangements..." There are still many people who find the word "damn" to be a swear word (not me, but still). Finding it in a Christmas song, of all things, might bother some people, especially since the song is religious in nature.

One particular favorite of mine was First Call's O Come, O Come Emanuel. The soloist sings with such beautiful emotion and a great pure sound. m-pact's Caroling, Caroling is another favorite of mine. And yes, this is an ALL-MALE group. (Britt Quentin's alto voice fools many a listener.)

All of the other tracks are very nice and superbly performed. I suspect many an a-cappella-head will be buying a copy of this CD for their parents this holiday season.

OK, I'll admit that when RARB sent me this one to review, I had to chuckle. I mean c'mon, a nice Jewish boy like me reviewing an album of Christmas tunes? What would my mother think?!

Well, being a musician herself, she'd probably love Primarily A Cappella's Voices Only Christmas as much as I did. Compilation albums are like Forrest Gump's box of chocolates...so I approach with excitement and weariness. Know this: the PAC people are bright folks. Every track is first rate and, whether or not you like the style or interpretation of a classic carol, deserves to be included here. And you'll likely find at least a few groups new to you whose albums you'll want to investigate buying (in my case, Go Fish).

On the other hand, know this too: there's not much "modern" a cappella here. Most of the arrangements, even those from the newer, "hipper" groups favor ensemble singing, even choral feels — albeit with jazzy influences. Also, you probably won't keep this one in the CD changer for long, but it's definitely worth a few good listens and would certainly make for creative background music at your annual Christmas party.

One major problem: what on G-d's green earth is The EDLOS' Sim Shalom doing on this album? Well sung, yes, although the arrangement (not their own) was intended for full chorus and cantor. The text is taken from the centerpiece of the Jewish prayer service — the Amidah recited 3 times daily — and asks for peace on "Israel your people" (though these words have been deleted in this version with "G-d fearing people" substituted). Certainly, world peace is a worthy sentiment for people of all religions especially around the holidays, but to represent this piece of Jewish liturgy as a "Christmas" song on a Christmas album is patently false and borderline offensive.

A few other minor quibbles: the album is front-loaded with its best tracks, so the second half is not quite as interesting (but slightly more comic — #10 Rudiana by The Accidentals is a hoot!). And having Chanticleer's In Dulce Jubilo end the album is something of a downer. It's not their best, not as well known as many other tunes, and it's way too formal to end an album that's this fresh.

All in all, it's very satisfying though. But enough Christmas talk. It's almost June in New York and I need some air-conditioning. Rudolph & Co. will have to wait.