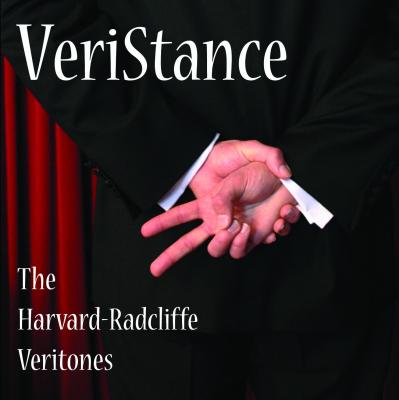 The Harvard-Radcliffe Veritones latest, VeriStance ranges from the bottom of average to the truly excellent. When the group delivers a cohesive vision from lead to arrangement, the consistently strong studio production puts things into a sweet spot that makes this release a winner.

Robert Jay Ross's studio-enhanced arranging on They might not match the group's live sound (especially the carefully sequenced VP), but the timbres are much more rave appropriate, and where some groups would ruin the piece with goofy syllables, Ross creates a lush texture of driving "bm"s and open-vowel crescendos.

Soloist Eva Schliz displays a touching yet powerful vulnerability on the alt-punk-pop piece Fidelity, but the arrangement and mix stomp when they need to tip-toe. Dead in tune but lacking subtlety, the Veritones's clumsy backups result in a fourth grade popsicle stick framing of a Picasso. Eva's gifts shine brightly enough to make the track listenable nonetheless, but listeners will wish for a mixing board to turn everyone else down.

No More I Love You's showcases Karen Adelman's dramatic, lamenting soprano against a vocal tapestry of her own creation, at once subtle and driving, powerful and respectful of space. One of the best collegiate tracks I've heard in a while, it is teeming with vitality and musical maturity.

VeriStance has its ups and downs, but when the Veritones are up, they are delivering their finest.

Whilst catching up with a former RARB reviewer, we discussed the difficulty in reviewing albums that evoke a reaction of, to put it succinctly, "Meh.". The Harvard-Radcliffe Veritones's VeriStance is one of them. There is a part of me that wants to write a haiku and be done with it:

The potential purchaser can stop reading at this point. If the purchaser is a fan, friend, or family, he/she will likely "take it". Everyone else will probably "leave it".

But for the Veritones, there are surely questions. Why did VeriStance leave this reviewer so uninspired? What is wrong with VeriStance? Three incarnations of Veritones (Classes 2006-2011) put their blood, sweat, and tears into this album!

Well, there is nothing truly wrong with VeriStance. The basics (pitch, blend, rhythm) are covered. But there is nothing to elevate VeriStance beyond the mundane. The song choices are boring: all are mid-tempo to slow numbers. There is a lack of excitement and energy in the performances. The soloists are average and inoffensive, but not a single voice makes a listener sit up and take notice. My favorite of the bunch was Ting-Ting Lu on They, but the song has such a narrow range that she is not able to show off much more than a sultry, dark tone.

The production is a hodge podge, though it doesn't really come through in the overall feel and sound, which is surprising. Nine of twelve tracks were laid down by James Cannon, while three were recorded at a studio in Boston. Mixing was divided among four engineers: James Cannon (2), Tat Tong (7), Bill Hare (2), and Dave Sperandio (1). But somehow every track sounds like it is being sung through a fog. There is a uniform lack of crispness and clarity which contributes to the album's monotony.

The liner notes reveal that the Veritones are clearly passionate about a cappella and this album, but I wish that passion was reflected more in the final product.

The more I review, the more I realize why compilation albums like BOCA are such a good idea. Collegiate a cappella albums seem more and more like vehicles to highlight one or two decent tracks, padded with a bunch of filler material in between. VeriStance, the latest from the Harvard-Radcliffe Veritones, is no exception.

VeriStance is staid and unimaginative. Arrangements, especially, are serviceable but uncreative and dull, featuring bland syllable choices and lots of repetition. While they sing well, the Veritones focus measure-by-measure, creating songs that lack any narrative or emotive arc. Lively articulations provide some energy, but the group relies too much on heavily processed percussion to push the album forward.

VeriStance does feature a few gems. Breathless and Suddenly I See are unique in that the group actually sounds like they enjoy singing them, and such energy is infectious. Crazy is a good arrangement, and features some nice destination singing. However, I Want You is the album's clear diamond-in-the-rough, featuring well layered effects, a sense of direction and excitement, and an arrangement that goes somewhere. The bridge of I Want You might be worth the price of admission alone.

Otherwise, the rest of the album falls flat. Several of a cappella's best engineers try their best to add sparkle to VeriStance, but there is little material to work with. Some song choices are especially questionable, with such insipid repertoire as They, Fidelity, and No More I Love You's. On such tracks, I feel bad for the block vocalists who have to repeat the same four measures over and over; must make for a fun rehearsal. Indeed, the one track with some interesting chord progressions, It Is You (I Have Loved), proves a little too difficult for the Veritones to sing in tune.

Yet the Veritones's biggest hindrance is soloists. Even the best solos on the album, Christos Theophanous on High & Dry and Kathleen Maguire on It Is You (I Have Loved), aren't much above average. Everyone else sounds uncomfortable, awkward and drowned out by heavy production. Without strong solos to capture the listener on simpler arrangements, it can be difficult to sit through.

VeriStance has the same problem as many other collegiate albums: a mix of good and bad that in the end doesn't sound any better or worse than most stuff out there. With some new song choices and stronger soloists, the Veritones can kick it up to the next level. Until then, you're probably better off listening to I Want You and skipping the rest.