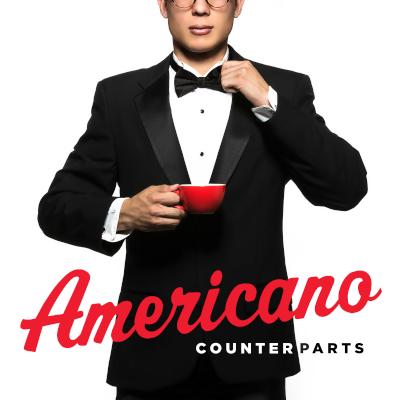 The University of Pennsylvania Counterparts are not trying to break new ground. They aren't on the cutting edge of a cappella, nor should this be expected of them as a collegiate group. The Counterparts have a traditional jazzy poppy style and bit of flair, and it serves them well.

With Americano, the Counterparts adopt a jaunty attitude that permeates the album, from the caffeine-infused art (coffee cup, coffee beans, coffee cup stain) to the music. The final nod to the Americano theme is in the closing Tu Vuò Fà L'americano, a cheeky satirical number poking fun at an Italian's Americanization.

The Counterparts keep the arrangements simple, with standard, time-honored vowel sounds and mirrored lyrics. Instead of the engineered, looped drum machine vocal percussion so common in a cappella albums these days, it sounds like there is actually a human behind the snares and hi-hats that supplement the music. The mix is well-balanced with capable soloists in the forefront of each track. The Counterparts manage to put the same smooth spin on every track, whether it be jazz or pop. It's easy listening.

The Counterparts' approach makes lighthearted songs like The Lady Is A Tramp or It Don't Mean A Thing interchangeable with emotionally powerful songs like Big White Room and Creep. The latter songs could be much more than pretty, but that's what the listener gets. The closest the Counterparts come to real attitude is Kelsey Plona's soulful solo in Death Came A-Knockin'.

Fans of the Counterparts and a more traditional a cappella sound won't be disappointed with Americano. Those in search of something a little more exciting should take a pass.

Americano is the third album that the Counterparts have released and I have reviewed since 2011. On Low Key and Handle With Care, the group maintained a consistent style and caliber of musicianship that put them in the middle of the pack of collegiate co-ed a cappella. I am pleased to report that with Americano, what the Counterparts do well has stayed the same and the rest has only gotten better.

Over the years, the Counterparts have established an exquisite taste for talented soloists and vibrant production. On Americano, every soloist is perfectly-suited to the role he or she plays. You can hear the champagne glasses clinking behind the voices of Scott Cesta and Andrew Block on The Lady Is A Tramp, the circle skirts twirling to Erica Ligenza in You Go Down Smooth, and the bayou mosquitoes buzzing around Kelsey Plona in Death Came A-Knockin'. The leads all sound comfortable with their range, dynamics, and even stylistic pronunciation so they can let loose and dig into the persona of their song.

The Counterparts favor mixing that showcases their strong soloists without drawing too much attention to the production itself. There are no overly complex rhythms or filters shouting "look what we can do in the studio!" The backgrounds and percussion are just nicely tuned, timed, and blended to create a smooth, sprightly setting for the leads. The one section that doesn't sound au natural is the introduction to When I Get Famous, which gets run through a "scratchy record" effect completely appropriate for the tone of the album.

The tone of Americano is a major component that has changed for the better. The Counterparts bill themselves as a "jazz and pop" group. Where the two previous albums mentioned above air on the pop side of the spectrum, Americano jumps into jazz with both feet. Seven of the ten tracks fall squarely in the jazz cannon, while the other three are anything but the cookie-cutter synth pop de la mode. Jazz lends itself beautifully to the use of scat syllables, walking bass lines, and colorful chords so that vocal timbre is the focus of arrangements rather than the means to an instrumental-sounding end. The dedication to such a classic genre, finished with crisp production and modern pizzazz, helps Americano stand out in the collegiate a cappella scene.

The sound is good, the soloists are great, and the arrangements reflect a sense of purpose. If you are a jazz enthusiast, you might rank this a "5". For me, there is not quite enough new material to achieve such a score. The songs with a strong arc that have not been covered to death, Death Came A-Knockin' and Big White Room, are riveting. I'm excited to hear the Counterparts continue expanding their repertoire, and finding new ways to revitalize classic motifs for a new generation of listeners.

Americano is pleasant album and one worth a listen. On the one hand, the album features solid soloists who are well-matched to their songs. On the other hand, the album is weighed down by the lack of a cohesive track list and by sometimes formulaic arranging.

The album's second song, Jessie J's Big White Room, exemplifies both the strengths and areas for improvement. Swaroop Rao is a talented soloist who brings a fierce energy to the song. She exudes the intensity of the song both when she is wailing above the backs and when she pulls back in the more tender parts. She sells it. I believe her. The arrangement limits the song, though. "Sho-noh"s on repeat and simple block chords limit the group's ability to shine. With a limiting arrangement, the backs come across as bored and low-energy.

This was again on display in Ruthie Foster's Death Came A-Knockin'. Kelsey Plona brings the exact attitude and energy, especially in the verses, to nail this solo. But the backs simply can't match her because of the limits of the arrangement. The male "doh"s stick out as robotic and the arrangement does not build as much as it could. (The "ba-da-da"s in I Want You Back also fall into this trap.)

I like the amount of production on this album. There is always a risk of over-producing albums, but Americano has the right amount. I especially like the crackling-record sound in the intro to When I Get Famous, which is different and an example of using the medium to add texture to the song. Kudos to the production team.

The Counterparts have talented musicians. The soloists are the strongest part of Americano and the group should leverage that in the future. With more focus in the repertoire and more attention to arranging, this group will be well-positioned for success.