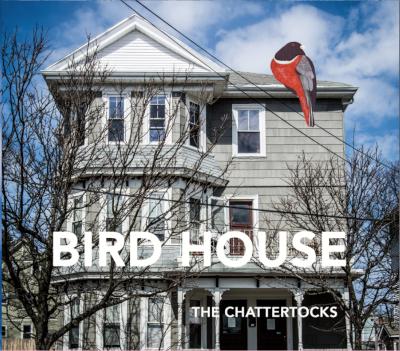 Bird House is a tremendous step forward for the Brown Chattertocks. The group's previous album, 2014's Waking Hours, was a mixed bag of outstanding songs and rookie mistakes, but Bird House is even throughout. It may not have any of the "WOW"-worthy highs of Waking Hours, but that's a good trade: I'd rather have an album that's equally solid throughout than one with a couple standout tracks and a bunch that I'll never listen to again.

There's not a song on this album that's unpleasant: from the haunting opening of Icarus; to the dreamlike Parachute; to the rich harmonies and beautiful crescendo builds on Cards and Quarters; to the ebbs and flows on Quiet Your Mind. On Time is a fun, sassy song to end the album, and overall the whole release is tracked in the right order; songs flow seamlessly from one to the next.

The Chattertocks chose some great soloists on these songs. The most memorable here are Becca Millstein, who absolutely wails on Ella Henderson's Ghost; Haley Schwartz's bright lead on Bad Self Portraits; and Liz Stanfield's astoundingly high notes on Stillness Is The Move (damn, girl!).

In fact, the only thing that I'd really change about these performances is the tempo of All You Wanted; it just feels too slow to me, so either the arrangement needs to be beefed up, or the whole song needs to move a little faster.

Bird House is a lovely and even listen — again, there are no super standout moments, but I actually like that. If you have one killer song, release a single. If you're going to release an album, make it one that's pleasant to listen to all the way through, not one that people will buy piecemeal on iTunes. I encourage the Chattertocks to pay a little more attention to detail, on everything from harmony parts (more than a few times, the harmony part didn't quite come in with the lead, which didn't detract from my enjoyment but it is noticeable), to the liner notes (Hall and Oates's Rich Girl was, ahem, written as "Hall and Oats", and there's no mention of the production/recording team either). But even with a few details missing, Bird House is an enjoyable and cohesive album overall.

Bird House, the latest album from the Chattertocks, has some nice moments on it but struggles overall with weaker arranging and syllabic choices across the board. The album starts off strong with two of the best tracks, Icarus and Parachute, clocking in early. Both of these songs benefit from smarter arranging choices, good use of dynamics, and a convincing emotional range from the backs. These tracks have mood, they have atmosphere. They also feature two excellent lead performances from Jennie Hogan and Libby Koplas/Liz Stanfield, respectively (Koplas also provided the arrangements for both tracks).

Following Parachute, however, we enter the doldrums that make up the majority of Bird House. Especially on the heels of a strong track like Parachute, Helplessness Blues and Ghost suffer from a variety of distracting background lyrics, and a lack of dynamic range leaves them sounding emptier than a lot of other tracks on the album. Stillness Is The Move breaks out of this a bit by having a more rounded-out sound, but the arrangement starts to drag quickly. To these women's credit, the leads on essentially every track are excellent. I wish the arrangements and backs were stronger in highlighting these performances.

There are some simple things the group could work on in the future to help this happen. First of all, nearly every track on Bird House is a straight lift of the original song. I want to hear these ladies put their own touch on tracks, even a little. This issue likely also goes hand-in-hand with some of the weaker or distracting syllabic choices. By sticking so doggedly to the source material, they force the singers into parts that don't allow any emotional muscles to flex, and frequently don't work as well vocally. (Also, the liner notes don't provide any credits for the production work, but kudos to whoever mixed this album and its plethora of "jin"s, "jah"s, and "joh"s). Some of the strongest points in Bird House come when the full power of these women gets to shine, like the overlaid "I won't fall out of love" lines in Parachute, or the homophonic Quiet Your Mind in the song of the same name. These moments let the background singers have their own presence and emotional weight.

The Chattertocks obviously have the vocal chops to make a real mark, and I encourage them to focus on that in future recordings. Bird House might have stood out as a strong offering ten or fifteen years ago, but in the context of what groups are putting forward these days it just falls a bit short.

I first discovered the Chattertocks when I purchased their album Zero to Sixty. When I was listening to that album, I found that the release had a lot of character, but not a lot of recording value. It felt very much like listening to the musical equivalent of a hand-written love letter. In some ways, you can't help smiling about the album, as it's sweet and endearing; however, the errors are present and clear as day. This holds true today. Much like previous albums, Bird House is sweet and endearing but lacks the polish to be considered a great album.

In keeping with the letter analogy, the important points of the "lettter" are Icarus, Helplessness Blues, Stillness Is The Move, and On Time. Icarus is strong and pushes forward. It's a great opener that does well to sell the album to listeners. The ethereal beginning is a strong opening statement, drawing in the reader closer. Helplessness Blues has all the emotions of teardrops on the sheet of paper. Beatrice Bugane does a great job of selling her emotions to the audience, and I can't help but want to hear her story. Stillness Is The Move is sleek and stylish, presenting a great story. Liz Stanfield did a great job arranging this and letting the soloist (again Stanfield) tell her story. On Time is a sultry conclusion to the letter, giving a sense of finality, and seals the envelope with a wink and a kiss.

Even with all of the positives that come out of the aforementioned tracks, there are a good number of negatives left. Much like writing a letter, there is always a risk of becoming long-winded and losing the overall message. The group loses focus for a minute, and the song being performed suddenly loses all impact that it originally had —  Rich Girl is the unfortunate victim of this lack of emotion. Much like the way a letter might have sentences that don't really emphasize the paragraph, this track doesn't help push the basis of the album forward. A lack of energy that accompanies a song that naturally feels repetitive makes for a forgotten section of an album. The Chattertocks have proven that they can be unforgettable.

There's a lot to be said for the endearing letter presented by the Chattertocks. The ability to tap into and present raw emotion is an ability the women from Brown University show well. However, to really have a great album, they need to do it consistently. The way that a letter needs an introduction, a statement, discussion, and a farewell, so too does an a cappella album. The Chattertocks have the emotion to make the listener want to read their heartfelt letter. However, until they can maintain the attention of the audience for more than a few minutes, they run the risk of ultimately losing the message.

This album is available from the Chattertocks' online store.