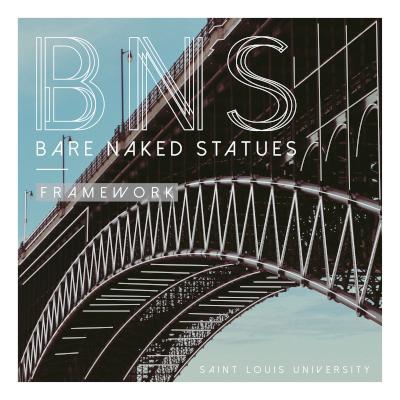 Whatever opinions or thoughts you have while listening to the latest release from Bare Naked Statues, these guys can flat-out sing. In a short EP that ranges from the sensitivity of Coldplay to the uptempo rap alternative of Twenty One Pilots, these guys handle each track with the right energy and emotion throughout. However, with great talent comes great responsibility, and the guys in Bare Naked Statues show that they can sometimes get a little too excited, causing some balance issues in the tracks.

The EP opens up with a beautiful rendition of Jack Garratt's Weathered, arranged by Shams Ahmed. Led by a powerful and, at times, sensitive solo from Alex Tadevich, the group does a fantastic job at growing in both dynamics and intensity from the very beginning of the track (with staggered entrances from each voice part) to the final chorus, showing the full range of what the group can do from the start.

The group continues to showcase its sensitivity in Strawberry Swing, where a lack of vocal percussion allows for the background vocals to really showcase themselves, with each part having their own mini motifs to complement the beautiful solo from Zach Scherzer. More importantly, the blend that the background has throughout is spot-on: everyone's vowels (particularly their "ooh" vowels) are matching, and no one part sticks out at any point except when one particular part is stepping forward with their motif. Absolutely perfect.

The uptempo numbers are also very strong from start to finish, most notably on Our Own House and Holding On To You. While I am impressed by the solos of Daniel Ditch and Ryan Higgins on the former and Tim Skelly on the latter, I remain a little concerned about the background vocals in regards to my "too excited" point. There are moments toward the end of these two songs where the backgrounds start to sound like they are competing with each other instead of sounding like one unit. For example, right before the final chorus (with the solo on the repeated: "Lean with it, rock with it, when we gonna stop with it..."), the tenors on the "ahh" vowel are drowning out some of the other leads and the bass, and I have a hard time hearing the first couple of passes. It's a little weird, given how great the balance is on the earlier tracks, and it makes me think the group just recorded these parts too loudly — the other parts couldn't be matched up. Being aware of how your part interacts with other parts is something to watch out for moving forward, especially on open vowels like "ahh". With more space and volume, it's easier to oversing without even realizing it.

This being said, I am throughly impressed with Framework and hope to hear a new full-length album in the near future. If the group focuses on blend for the entire record — ballads and uptempo numbers equally — the Bare Naked Statues will be on their way to a "5" from me.

The Bare Naked Statues present us with a 5-track EP. Don't let this number turn you away; it's always best to serve a small portion of high quality work than many low quality ones. The harmonic progressions in the songs of Framework follow a storyline, and each story is told lovingly by the soloists while the background vocals are there for support.

When we talk about vocal arrangements, Shams Ahmed has perfected a framework of storytelling in a cappella. Weathered begins with a slow but engaging flow and soloist Alex Tadevich delivers the lyrics right to the listener's heart. His pronunciation of the lyrics are so clear that even a child could figure out every word and that's how a singer should tell the story of this song.

Mashups are still a trend in a cappella; sometimes they work, sometimes they don't. Jackie and Wilson is a mix of Hozier and Jack Wilson songs that are in different genres. The good news is that the group put much thought into the mashup; even the random insertion of Higher and Higher still works.

Strawberry Swing is one of those well-arranged choral style songs that succeeds in the absence of vocal percussion. The rich layering of voices and a big fat bass is enough to present a great a cappella performance. Once again, the soloist's enunciation (Zack Scherzer this time) is crystal clear.

A trio of a cappella arrangers collaborate on the impressive product Our Own House. This track is rich with vocal parts that are fun to listen to — it's like being in a candy store where it's exciting to choose which candy to pick. I'm not sure if my favorite part is the soloist or the background vocals singing the harmonies — maybe even the bass line. One thing is for sure: it's a pleasure to the ears.

Framework is difficult to let go of when the last track is Holding On To You, even if this is not the first a cappella version I've heard. Tim Skelly is the front-liner and sings the solo part like he means it. This entire EP is pumped from start to finish complete with aptly chosen solos. After listening to the five tracks, I miss BNS only a few minutes later.

One key factor I enjoy throughout Framework is that it isn't overly produced or distracting from the group's actual sound. Sometimes there are moments that may be too much, for example the vp doesn't always seem like a viable human, but in today's recording age this is an accepted norm. The guys of BNS give refreshing interpretations of Weathered and Strawberry Swing, the latter being a more intricate version than Coldplay's original with its interweaving melody lines and layering of voices. Another shining moment in the EP is the closing track, Holding On To You. Although I was yearning for more grit/swag in the rap sections, this track accurately represents Twenty One Pilots' original with the soloist's high emotional involvement and the background vocals' crisp attention to detail. The highlight of the track is the building climax on the lyrics "entertain my faith", where backgrounds add in additional text and we hear Brian Tunney's brilliantly driving vp.

Within Framework as a whole, the problems only tend to present themselves when BNS strays from the things it does well. This is ever so present in the short, choppy, nasally forward-sounding backgrounds that distract from the soloist: examples of this fault are present in the initial verse of Holding On To You (I am glad the group ditched this tendency after that verse), but unfortunately the same cannot be said for Our Own House where this element lies throughout. Although BNS brings the right energy to this piece, these elements really distract from the soloist and also from the nice tone and blend the group has built up so far. Another trap the Bare Naked Statues seem to fall into quite often is a repetitive backing that could use more switch-ups. While the guys do add some fairly innovative moments to their tracks, most of the tracks on this EP are consistently repetitive, especially Jackie and Wilson and Our Own House. I think taking that next step in creativity will really set BNS apart even further as an outstanding group.

All that being said, the present day a cappella lover is in for a treat with the group's new EP Framework. My favorite track, Weathered, has been added to my personal playlist with the song's haunting opening and Alex Tadevich painting his emotions like a landscape on his solo. As I continue to listen to the successes featured in Weathered, I know listeners of this genre will enjoy the guy's choices of repertoire — BNS always seems to give listeners an unfamiliar track done well.