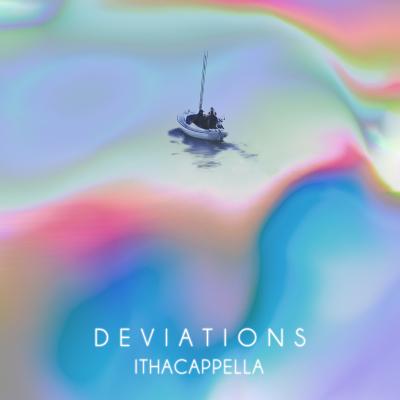 I'll say this: Ithacappella swings for the fences on this one. It's tough to live up to a name as large as theirs every time the group releases a product, and unfortunately, it led to particularly rough choices in terms of production on Deviations.

There's a great deal of options groups have at their disposal when building an album, and the repertoire of effects a studio can offer grows each year, too. Most of these effects come across as innocuous: cleaning mistakes in pitch, adding a little reverb on a soloist to sweeten the tone, etc. By now, it's standard for a finished album to be processed this way. But there are other tricks that are less commonplace, and they appear frequently on the first two tracks of Deviations, including some effects that make voices sound like instruments, or even computer tones.

On the one hand, having been in a group that recorded a dubstep track, I understand the desire to enhance a track by making it seem like the electronic song it covers. That being said, I've got a huge dilemma in scoring a track where most of the syllables have been turned into instrumental sounds through the production method. I definitely end up questioning if such sounds qualify as a cappella.  From my point of view, if I can't tell whether the sound was made by a computer or a person's mouth, how am I to consider it in the genre we review? Sure, the track sounds like a great radio hit, but does it qualify as a cappella anymore?

Kings and Queens is extremely guilty of this, which is why the track gets the score it does. I can barely pick out a syllable from almost the whole song — I wish I could have a more plain version to appreciate everything going on from a group so known for innovative arranging. I guess the eagle screech at the start should have warned me there was a little too much about to happen.

Stepping down from my soapbox, once the studio tricks get dialed down by the third track, the rest of the release is phenomenal. Take the frills off, and Ithacappella brings its signature innovations to the forefront. I love the original track, Disappear, in particular. Solid arrangement by Mark Farnum, and great source material from Anthony Cubbage. The group could do worse than record a few more of Cubbage's songs for the next album. Farnum's arranging chops shine again in I Heard It Through the Grapevine, bringing a purely Ithacappella sound to an old classic.

Soloists are fantastic across the board. Despite the editing mishaps, Dan Purcell still soars in front of Kings and Queens. Cubbage's voice on his personal creation carries shades of former member Jason Wilber, whose rendition of Assassins remains one of my favorite a cappella covers to date. Mark Farnum has grown tremendously as a soloist since 2013's The Party Upstairs. Back then, he struggled to place his voice for Justin Timberlake, but now? Hoo boy, Grapevine shows just how high he can fly. His head voice is crystal clear, and his unerring intention helps push his beautiful arrangement. And Josiah Spellman on The Quest? I truly thought Purcell was soloing again, a testament to the incredible voice this kid has. A marathon song at nearly six minutes, the release's closer helps banish my ill feelings from the first two tracks.

A shaky start to this EP isn't enough to ruin the work as a whole, and once again Ithacappella proves it can deliver something next level. Just ... leave the booth magic at home next time, okay?

Deviations, the most recent release from Ithacappella, is a standout album. The album is excellent in almost every respect, including the soloists, arrangements, and production quality. Groups should take pointers from Deviations.

Deviations highlights the incredible versatility of Ithacappella. The group nails a banger of a mashup in Left Hand Free/Murder, features an arrangement of an original song written by group member Anthony Cubbage, and shows mastery of a soul/gospel sound on The Quest. It's rare to find a collegiate group consistently performing at a high level in multiple genres. But Ithacappella pulls it off.

Now, a few of the specifics.

First, Deviations features soloists that are not only musically talented but also totally committed to and well-suited for their songs. Ian Goodman's solo on Left Hand Free/Murder, the album opener, and Josiah Spellman's solo on The Quest, the album closer, are two of my favorites. Ian brings the exact intensity and attitude the song demands. And Josiah's solo is gorgeous and emotionally compelling. The two solos are matched by equally good performances elsewhere on the album. The one exception to this would be You're Nobody 'Till Somebody Loves You, where three members split the solo and sapped cohesion in the process.

Second, the arrangements are well done and show off the creative talent of the group. Left Hand Free/Murder takes the best parts of each song and integrates them so that the mashup becomes a unified track. I love the arrangement for Disappear and may even prefer it to Cubbage's non-a cappella original. The arranging choices in the back half of the song support the emotional and musical peak of the song. And little details, like the descant in the final chorus, add up. The Quest is one of the longer songs on Deviations, but the arrangement's use of dynamics, rhythmic variation, and the key change keep up the momentum and leave me wanting more.

On the other hand, I am disappointed by the arrangement of I Heard It Through the Grapevine. I am drawn in with the innovative, jazzy introduction, but the choice to turn to a more dubstep sound two-thirds into the song makes it feel disjointed. I also think the group may have gone overboard in the back half of the song with the belting, riffs, etc., without a clear purpose. The track has creative parts that could each be used as inspiration for a new take on the original song, but here Ithacappella loses the song's heart by trying to do too much. So while the execution of the arrangement is excellent, the song gets marked down because of its arrangement.

Third, the background and production of the album make Deviations a seamless listen. The use of percussion, the decision to emphasize certain background parts at key times, and the dynamics of the album as a whole are tastefully done. I also enjoy how the production team tailored each track to fit each one's individual needs, while ensuring a smooth sound within and between tracks. With songs as divergent as Left Hand Free/Murder and The Quest, striking the right balance in production isn't always easy.

Finally, I enjoy the conciseness of the album and the placement of each song on the track list.

Deviations is an excellent album and deserves a top score because it is some of the best that collegiate a cappella has to offer. The album has its imperfections, but those imperfections shouldn't be overvalued because they are heard in contrast to some truly great content.

Ithacappella delivers another fantastic all-male collegiate a cappella performance with Deviations. While the album doesn't quite reach the highest of highs of Ithacappella's previous album, To Build A Home, it is definitely more consistent in quality across its duration. This makes it far easier to award Deviations just as high of a score.

While I won't go into detail on every song on Deviations, I do want to call out certain songs by the overall album qualities they exemplify. The album kicks off with Left Hand Free/Murder, a stellar mashup with Ian Goodman providing an over-the-top, eccentric-yet-fitting solo. The best mashups are most often those that blur the lines between the originals, and this song was so convincing in that regard that I had no idea it was a mashup until I read the liner notes. The consistency on this album is immediately evident by how much stronger and cleaner the opening song is compared to the group's previous albums.

I'm generally pretty ambivalent about very heavy mixing and production on a cappella recordings, but Ithacappella's arrangers and vocal percussionists definitely make good use of the tools. Kings and Queens, possibly the most heavily mixed song here, is my absolute favorite, with a gorgeous use of background voices, powerful vocal percussion, and a breathtaking solo by Dan Purcell.

Disappear reminds me of one of my favorite aspects of Ithacappella's albums: they are never insecure about giving the listener a moment to breathe. The ample amounts of negative space here through gentler sounds and longer instrumental sections keep me from getting fatigued from the album's more intense moments. It's an original song, and while I like to give extra credit to these, I would've given this song an easy "5" even before knowing that.

As on Ithacappella's previous album, Mark Farnum seems to get a kick out of reimagining classic R&B/soul songs to fit his group, and I can't really complain. I Heard It Through the Grapevine is full of charm, personality, and creativity that simultaneously puts a unique spin on the song without betraying the original. Towards the end of the song, there are a few extra mashed-in melodies from other, completely unrelated songs, that somehow work extremely well together; incorporating mashups in one way or another is a common pattern in several of the songs on this album. Whether or not this was intentional as an album theme, it provides a method to this consistently present element. Even You're Nobody 'til Somebody Loves You does this to a degree, as three different soloists pass around the melody and instill their own unique flavors to the song.

The Quest is a fantastic way to end the album, but I do wish it was a verse shorter. It starts strong and ends strong, but it just barely overstays its welcome by the last verse. Thankfully, this does not stop it from being a fitting end to Deviations.

Liner notes are nearly impeccably detailed. Arrangers, soloists, vocal percussionists, original performers, original writers, producers, and publishers are all included, even for medleys/mashups. The only possible nitpick I can have is that there is a bit of a gray area about crediting some of the clever inserts towards the end of I Heard It Through the Grapevine. For those who haven't listened to the album yet, I won't spoil what those additions are, but this gray area could've been avoided by simply including the writers in the credits, without even needing to include the added songs' names.

While some songs on Deviations are better than others, there is a bare minimum quality reached by every song on this album, where that minimum is "great". Additionally, Ithacappella's use of negative space through longer instrumental sections and overarching dynamic contrast means the high points can truly shine, while the ability to breathe in between is all the more appreciated. As with Ithacappella's previous endeavor, Deviations is an album I can enjoy for a long time after I'm done reviewing it, and its excellence goes far beyond just the male collegiate a cappella world.