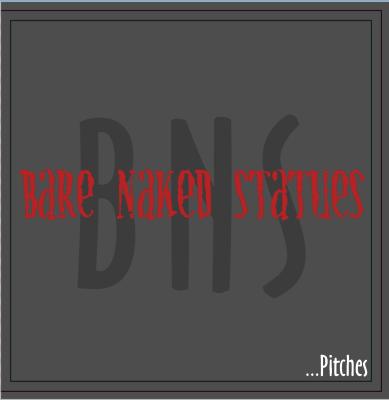 Bare Naked Statues are heady-voiced balladeers, crooning bittersweet angst-filled lyrics of tortured love. Yes, they use some studio effects like autotune and distortion, but the supreme mellowness of ...Pitches overrides any other musical impression.

I can imagine any number of these songs making their way onto a iPod playlist named "Thinking of you" or "I'll miss you while you go backpacking in Europe". Or perhaps it could serve as the background music in an episode of Smallville right at the point that Lana looks Clark in the eye and says something like "If I can't trust you to tell me who you really are then what do we have?" But Clark just looks away. Ahh, the inner turmoil!

But as an album, ...Pitches, despite its strengths, is a little bit draining. That's not to say that these songs aren't well-sung, but an entire album of such introspective covers is precious tantamount to somnambulistic. When Walk On The Ocean feels like a refreshingly up-tempo change, you know you've got some things to work on.

How the Statues get such creamy-voiced crooners year after year, I don't know. But I'll start with the assumption that they just wouldn't sound "right" on more aggressive leads. Not everyone was meant to rock out. And there is truly nothing worse that a bad pairing of song to singer. Thankfully the Statues have wisely avoided those pitfalls. But there are some things that the statues could work on to make their music more vital.

And speaking of dynamics: One of the greatest setbacks in modern a cappella generally is the seemingly un-mourned death of dynamics. It's undeniably exciting to cover songs once thought of as beyond the grasp of this art form. But just because the original track had no dynamics doesn't excuse us from the responsibility to breath more life into our music. Dynamics are one of the voices greatest natural strengths. Even preschoolers have an intrinsic appreciation of the dramatic excitement of dynamics and they modulate their vocal play to reflect that. Let's not forget what we all used to know. There is a limit to the effectiveness of understatement.

Every arrangement on ...Pitches is fine. But no bold or unexpected turns. No head-turning chord substitutions. No reexamination of the originals in a new light. The happy exception to these indictments is the unusually creative medley Boulevard of Broken Songs. That at least makes a few surprising pairings.

All that said, ...Pitches is a solid effort, an album that will clearly please fans of the group with little that's genuinely weak and much to enjoy.

After reading less than stellar reviews (an average overall score of 2.7) from the Bare Naked Statues' last album, Don't Feed The Statues, one would be wary of what the next album, ...Pitches, has in store for its listeners. To judge from those reviews, this sophomore effort has come a long way in production, tuning and song selection.

From start to finish, ...Pitches sets its repertoire choice with "pretty" baritone and tenor male solos, using Radiohead, Coldplay, and a wealth of alternative-pop songs to round out the album. Though the same stylistic solo became boring, one should credit the Statues for knowing what songs sound best for their soloists. Sean Riley carries the best solos on the album, with a beautiful, crisp, effortless voice on Colorblind and Fake Plastic Trees. Charlie Barrale also performs well, but one of his solos, The Mixed Tape, was a bit flat on emotion. There were a few songs that needed a bit more substance to the solo, like the Boulevard of Broken Songs medley and Inside Out.

The arrangements do not sound like 14 members, but more like a seven person group with some extra layering. It's hard to hear different styles of voices in these songs, with favoritism going towards the tenors and a brighter sound on each track. The vocal percussion approach on this album is not one of my favorites. It's muddy at times, at times practically sounding like static on tracks like Walk On The Ocean. Arrangements range from solid to boring, with many songs falling victim to too much repetition. Even a little variation from verse to verse, changing syllables or shifting rhythms, will result in a more interesting listen. Fake Plastic Trees fell victim to lots of repetition, and even adding a consonant in front of vowels can emphasize different rhythms and add more texture to a track.

There are many strong tracks with some hiccups that hold them back from receiving higher scores, with the biggest offense being a lack of diversity within a song's arrangement. Boulevard of Broken Songs would've been fantastic if the background arrangement weren't so repetitive; when you have the same 4 chords over and over again, take a creative leap and change the arrangement instead of just changing the solo. Colorblind has pleasant, arpeggiated chords, and even Fix You, despite being one of the most recorded tracks of 2006 and 2007, had a cool warbling effect in the introduction that set it apart, if only slightly, from the other versions out there.

Tuning is a bit off on many tracks, but having an album that's not pitch-corrected on every last note gives it a less robotic feel. It was never horribly out of tune, but enough that after a few listens, something seemed a bit off. The biggest offenders of pitch problems seemed to be the low baritones, or whomever sang on parts one part above the lowest bass lines.

Overall, ...Pitches is a pleasant album. There's no groundbreaking a cappella, no tracks that are must haves for the avid a cappella collector or listener, but it's solid production, solid soloists, and has some great highlights. You won't miss this album if it's not in your collection, but if you like their genre of song choice, you might find yourself singing along after a few listens.

The Bare Naked Statues of St. Louis University are average. They are even a bit below average considering how much the bar has risen over the past five years in the recording arena. Some melody lines have flat pitches in the progressions, the vocal percussion is sufficient but not mind-blowing, and the soloists are about a six out of ten in the grand scheme of collegiate a cappella heavenly leads. It sounds as if the Statues had some money — but not loads of money — to spend on this album. It also sounds like they worked very hard to prepare for the engineering sessions. For all their hard work and dedication, their album still comes out average. There are certainly some good things here, demonstrating the Statues are continuing to learn what goes into the making of a good recording.

But everything about …Pitches shouts "Hey, we're still learning!" The soloists are polite and do not offend, but neither do they inspire. The energy of the soloists is lacking throughout, causing the album to drag. The entire track list comes out about 70-90 bpm (beats per minute). Even Inside Out, the frantic late 90s hit by Eve 6, is slowed down to a mellow sway. Everything sounds incredibly careful, as if the Statues do not want to make a mistake or wake the baby next door. Boulevard of Broken Songs is an adventurous idea (combining Green Day, Oasis, and Aerosmith), but it lacks so much energy I struggle to get through the medley in its entirety.

On the positive side, they've done a good job of balancing their overall sound, writing their own arrangements (which should continue to improve with time), and coming up with a sound worthy of hitting the studio with but not good enough to really shine. Sean Riley is an excellent talent on Radiohead's Fake Plastic Trees. Riley feels this song through from start to finish and doesn't allow you to move on to the next track until the last note is sung. It's hauntingly beautiful. In addition, this group can blend like no other. Blend and balance are the Statues' core strengths. As for other highlights? There's not much else to speak of that really stands out.

If the Bare Naked Statues of St. Louis University want to impress in the future they need to put together a broader track list of varied tempos, continue working on their arranging (listen to top groups and study their arranging ideas/techniques), and use breath to create an energy and vitality that is clearly missing in their recordings. The Statues still need work before their music is ready for a mass audience.

To order this album, write to the group at: