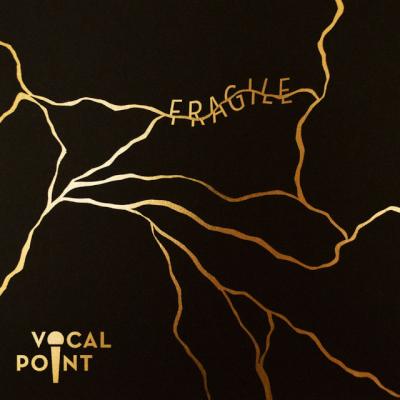 Though founded in the late 1990s, the University of Delaware's Vocal Point is relatively new to the recorded world; the group just released its first full-length album in 2014. This is a group with a lot of history — but also seems like it came out of nowhere, with two very strong albums (Momentum and Phoenix) under its belt right out of the gate.

On its new EP Fragile, the group continues this strong recording trend. Vocal Point's song selection is both familiar and creative — while you've heard plenty of other covers of many of these songs, Vocal Point's arranging style seems fresh and new. The group loves a good mini-mashup teaser, weaving Muse's Knights of Cydonia into the beginning of Paint It Black, and a super slowed-down ballad rendition of Jimmy Eat World's The Middle into the beginning of Say You Won't Let Go. Vocal Point even hints at Believer at the end of Midnight, letting the songs flow seamlessly into one another and turning Midnight into a long intro to Believer — it's a great way to make an overdone tune like Believer seem fresh and new here.

Another thing this group does well is dynamics: Finest Hour in particular keeps soloist Sarah Bajohr clear as a bell throughout the whole song but finds a way for the rest of the group to start at a whisper and grow throughout the first verse chorus, then pull back and grow even more the next time through. It's the most memorable song on the album; every verse and chorus feels different as the group has a constant push/pull in volume to keep the momentum going and keep the listener fully engaged.

Don't be deterred by the familiar track list on Fragile: there's energy, creativity, and passion here, and Vocal Point finds ways to make these songs sound fresh and new. It's a great EP and another solid addition to Vocal Point's growing discography.

Vocal Point has a pretty solid grasp of how to make an arrangment unique, reflavoring it to the group's style. These singers also have a history of powerful solo voices that can cut texture. Historically speaking, they've smoothly synthesized these skills to make next-level products. In comparison to prior releases, however, Fragile lacks that sense of polish that has made Vocal Point stand out.

Paint It Black is a great kickoff. It leads us in with the expected reflavor and a solid solo. I did raise an eyebrow — for as strongly as it started, I expected it to ebb, and instead it stayed at powerful the whole way. Midnight is the softest track on the album, and that helps put its score higher as well — it has some necessary nuance to keep it interesting, but considering the music turns directly into Believer (the group's ICCA set plan), the musicality of the track doesn't actually lead to that song — it stagnates and just changes.

Which brings us to the weakness on the whole: I'm missing the individual arcs of songs. The soloists and arrangements are both flashy and skillfully executed, to be sure, but there are never any arrival moments. The throttle is actually dialed back in their (admittedly clever) reinterpretations, and each track never gets a build or real tension, which never gives us a release.

I find this particularly frustrating compared to the group's previous albums. In my review of Phoenix, I said: "As a group, what Vocal Point executes flawlessly is the infusion of the soloist and the background voices across any number."

Of arranger Jon Smith on Momentum, I said this: "His backing vocals pass the baton of focus in the space between the soloist's lyrics, bridging the gaps with beautifully stacked chords and commanding your attention with lyric echoing across a well-constructed melodic fill."

Contrast those observations with this product, where the arrangements and soloists frequently don't agree with each other. A prime example is the slow and gentle touch of soloist/arranger Christopher Jentzsch on Say You Won't Let Go, which flies in the face of thudding "bom" syllables from the basses, and soaring soprano lines which attempt to make it epic from the beginning. Jentzsch, in fact, has several tracks on this album where he serves in multiple capacities — arranging, soloing, and percussing — much like Smith in previous albums. Stay has the added layer of the percussionist being on a different page. While Grace Otley is in a power zone and the arrangement is in a quiet swelling zone, percussionist Mike Park is living in a Pentatonix funk zone. That variance steals all of the thunder from the clever swells and build of the background, and doesn't agree with Otley on what moment needs attention. Finest Hour has the same disagreement across the three seperate elements. Because there's no agreement on the important points, the meaning blends together, and ends up taking away the intended beauty of the release to homophony at the end. This is especially confusing given that the personnel isn't wildly varied — I find it odd to have these criticisms of tracks that are arranged and performed by the same person. Finest Hour is mostly Jentzsch’s brainchild, but it gives the impression that he doesn’t agree with his own interpretation of the other elements. The talent and its utilization is all there, but the cohesion that has traditionally been the group's strong point is missing.

It's not the end of the world; all of these things are easily fixed just by getting back on the same page as a group about each number. If I remember anything from my time in groups, it's that talking about what everyone is actively thinking about during a song is a pretty good way to troubleshoot nuance. But without a sense of musical unity, Fragile only comes together as your average product.

On the last album from Vocal Point, I had nothing but praise for the group. The overall sound was equal parts familiar and brand new, a well-executed presentation sure to appeal to all audiences. With Fragile, a new array of members means new ideas. This album still has elements of familiarity, but the sound is more focused and intense. This new slightly darker and complex persona (especially in the opening numbers) isn't a new thing in the a cappella world, but it is for folks at the University of Delaware versus Vocal Point's previous recordings. It's not perfect, but it's a welcome new chapter for the group.

I'm going to break this album into two chunks. The first chunk is the first three tracks on the album, which consists of the group's 2018 ICCA competition set. There's an incredibly strong feeling of continuity in these songs. The tracks sound great together. The soloists across the board are great, and the raw power that flows from the speakers is almost palpable. However, this sense of continuity complicates the standalone value of the tracks. The last twenty seconds of Midnight introduces Believer, but because of this design, the track has no real resolution. The ending is an abrupt dubstep-like drop into the next track. Believer feels incomplete without the musical preface. Together, the tracks are very well done. Individually, there is something left to be desired.

The remaining four tracks all stand entirely on their own, and they do so almost flawlessly. Stay is a dangerous track for a cappella as Zedd and Alessia Cara's original has a very digital sound which is next to impossible to create live vocally. Therefore, Christopher Jentzsch used some arranging magic to magnify the soloist with some gloriously colorful chords. This track is stellar in the way it ebbs and flows and really lets soloist Grace Otley shine. The next track, Say You Won't Let Go, is absolutely beautiful. Jentzsch penned the arrangement, only to then step forward and be the spotlight of the track. The bounciness of James Arthur's original is stripped away, paving the path to a deeply sincere vulnerability. The only issue is the opening measures, which quotes The Middle, the song originally by Jimmy Eat World. This song is never noticably referenced again throughout the number, questioning why it was ever introduced in the first place. That little loss of continuity is the only blemish on what I would otherwise consider a flawless production. The album closes with Finest Hour and Fragile, both strong showings by the soloists and putting Jenztsch among the a cappella elite that have arranged an entire album and done so at a high level. It's an impressive feat. Keep him on your radar, I expect we haven't heard his last arrangment.

Despite its minor flaws, this album is a great addition to any a cappella collection. Context on a few tracks results in minor question marks for the group, but those exist in how the song is presented to listeners. If you have the approximately 25 minutes it takes to listen to the entire album, you can do it with no regrets. If you have only time for one or two songs, pick one of the last four. Either way, no regrets, and happy listening.