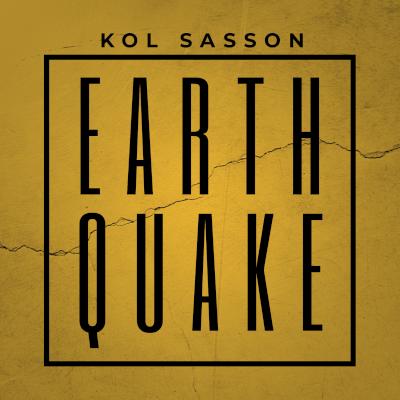 Earthquake has a little bit for everyone, and there's nothing wrong with that. There are no glaring flaws that will stop you from wanting to listen to this album. However, while this variety is great for a family concert, a lack of overall group identity prevents Kol Sasson from being as strong as these singers could potentially be.

Overall, I really like the diversity of Earthquake. There are multiple different styles of eastern and western music, with little morsels of great musicality throughout the album. 2 Rocking Chairs / All Time Low, a mashup of two Jon Bellion originals, has a great presentation in the opening minute with a very fun backbeat groove. Another great groove is in Bei Mir Bist Du Shein, which keeps the sultry swing reminiscent of the 1930s original. Add in the American Indie number The Way We Touch and the Hebrew groove of Adayin Shelach, and you have a very well-rounded selection of songs.

The converse to all of these different thoughts and ideas is that there is nothing that is unique to the group. The album encapsulates the idea of "a jack of all trades and a master of none". Across the board, there are no earth-shattering new ideas. 2 Rocking Chairs / All Time Low feels more like two halves of two different songs stuck together rather than a smooth conglomeration of multiple ideas. The chords in Bei Mir Bist Du Shein very rarely utilize a large number of colorful chords that could really make the jazz element stand out. The Way We Touch is bursting with energy, but there is little unique about the song to make me want to remember the track five minutes after I've heard it. These songs could each be the potential identity for the group style, but putting them all together with minimal investment in each track keeps the overall impact of Earthquake to a minimum.

The next step for Kol Sasson is to find a place to firmly plant its feet. An album of this breadth is great for someone who has never heard contemporary a cappella music — everyone will find at least one track to enjoy and begin to understand just how diverse this style of music can be. However, the full statement is "a jack of all trades is a master of none, but oftentimes better than a master of one", and it can be interpreted many ways for this group. If this is an album that is meant to be diverse and simple without trying to invest heavily in one style, the group has served this purpose and I believe my scores reflect that. If this group wants to go the next step and invest in a smaller range of song choices to find an identity, all the singers simply need to do is pick a few songs from this album they really like and start working more towards solely singing in that style. Either choice is acceptable, and I look forward to seeing which one Kol Sasson picks.

Jewish a cappella has a tremendous number of potential pitfalls, and anyone who's ever sung in a group dedicated to it deserves my utmost respect. Kol Sasson's Earthquake falls directly into a lot of these pitfalls, but also has several shining moments and successes with a core, consistent sound.

The album starts off very strong with the mostly nonstop energetic You Go Down Smooth. Leah Schatz kills it on the solo and carries the song hard, at least until the final verse when the rest of the group begins to match her joyful intensity.

Unfortunately, cracks begin to show in the choruses of You Go Down Smooth, and these cracks manifest themselves further in the album. Several arrangements contain a lot of missing potential. Most background singers end up on a single layer, often static, where more than one intertwining layer would create a lot more forward momentum for some of these songs. Even when that's not always entirely the case, such as in Bei Mir Bist Du Shein, there's enough repetition and lack of follow-through between bars on the individual singers' level that some of these songs just seem to end without conclusiveness.

The songs that especially avoid this issue are Tzion, Bediuk Kmo Hayareach, and You Go Down Smooth — while there are spots where these songs can more fully realize themselves in other ways and go above-and-beyond, they at least successfully fill-out the group's background sound and give the listener something to latch onto.

Some of the soloists really take ownership and carry a lot of my enjoyment of certain songs. Zoe Eisenberg on The Way We Touch and, as I mentioned before, Leah Schatz on You Go Down Smooth hold nothing back on their respective songs. There are also some tracks, however, where a song sounds as if the singers are showing restraint or inclination to emulate a song's original performer rather than empower their own voices. Matt Jacobson, for example, carries very consistent vocals on several songs on the album, but he often borders too hard on imitation of an original performer, which holds back his obviously amazing ability from exploring any of the songs for himself.

The last core piece I want to discuss is mashups: for the most part, they don't sit right on Earthquake. Some of them lose all sense of followable structure or form as a standalone song, such as 2 Rocking Chairs / All Time Low. Some of them risk losing the individual components' beautiful harmonies as standalones, such as Im Telech losing some of its beautiful harmonies by giving it Unsteady's more predictable four-chord-song harmonies. Some simply miss the mark on premise, such as Yachad / Home, which combines two way overdone songs and never justifies its questionable concept. In all of the above cases, I questioned at least once or twice whether I would've enjoyed the individual songs in each mashup more as standalone.

While God Bless the Broken Road / And So It Goes has some form issues and some over-syllabled background sections, I still enjoy it most overall because it fully realizes the premise of the mashup by the final chorus. The two melodies commingle without stepping on each others' toes, and the second half of the song carries harmonic themes from both songs and unites them beautifully.

As I said, Jewish a cappella is difficult to execute. By covering music that hardly any other group is touching, groups have very few reference points for inspiration. Choosing music that fits the style is arduous, as Jewish music is already quite niche before you reduce it to songs that can be reasonably done a cappella and still fit your group's identity. As a result, the execution of Jewish a cappella tends to fall into cliché tropes such as arbitrarily chosen mashups or over-syllabled imitations of other instruments, less imaginative creative choices in arrangements, and sometimes restrained soloists.

However, the fact that these issues can be identified and pinpointed means they can be avoided and conquered. This is even more so the case given Kol Sasson's great voices at its disposal and Liquid Fifth backing the album's production; I have to hope for nothing less in the group's future work.

Kol Sasson's Earthquake has a lovely sound and some good ideas, but the album as a whole suffers from a severe lack of variety. Ten out of the twelve songs on the album are arranged by Scott Kaplowitz, and though this is an admirable achievement, it makes the arrangements by Leeza Malachevsky (Adayin Shelach and Tzion, and the finale, Unsteady / Im Telech, is a collaboration between the two arrangers) feel like a breath of fresh air.

The real problem, though, is in the utter homogeneity of the rhythm in the background vocals — quarter notes upon quarter notes, in every single part, often including the vocal percussion! This, combined with a certain stringent adherence to the written rhythm in the solo lines, creates a plodding effect that detracts from the overall energy of most of the album's tracks. The album's opener, You Go Down Smooth, manages to offset the relentless quarter note background vocals with a spirited solo by Leah Schatz, but the next four tracks follow the same pattern far less successfully.

Blending Hebrew and English songs is a great idea, but the transitions aren't always as seamless as in Yachad / Home. The rhythm and tempo of Unsteady and Im Telech are just different enough to feel jarring, like it's just two completely different songs right next to each other instead of working off one another.

Earthquake has a nice, clean sound, but a large portion of the songs lack something in spirit. Kol Sasson might really benefit from some variety in its arrangements, and from a freer approach to its rhythm and solo lines.