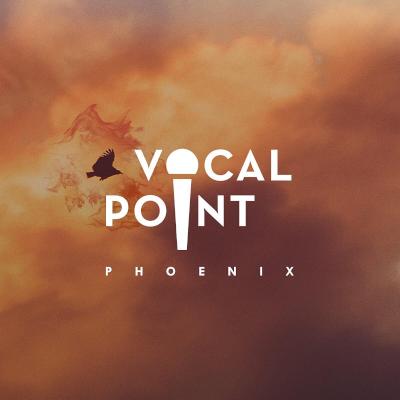 Good lawd, Vocal Point (University of Delaware) has learned a thing or two since its debut album Momentum, and the group doesn't waste a moment proving it. The follow-up album Phoenix opens with the oft-covered Take Me to Church, but unlike many other versions, Vocal Point actually takes you there. The song begins with a haunting chant-like "Amen" refrain, followed by a solo entrance over sinewy church hums before the beat kicks in. The effect of this first 1:39 is solemn, spellbinding, and thoroughly engaging. It's also crackling with anticipation. In my review of Momentum, I described what I interpreted to be a lack of forward motion, or a general malaise into which the group settled in around the 2-minute mark in each song. Thankfully, that problem has been solved, and with style. So many songs on Phoenix get stronger as they progress, with smart, fluid, and effective arrangements adapting or changing things up every 15, 30, or 45 seconds. The result is a collection of extremely listenable and more importantly re-listenable pop tunes.

The first three songs on Phoenix are a powerful introduction to this new approach, with the aforementioned Take Me to Church followed by an even better Ghost. The Ella Henderson cover is fuller and more complete than the excellent lead track, blooming with a richer color palette and a more robust rhythmic feel. The solo, which is the best on the album, is compelling and powerfully delivered. Vocal Point follows this success by pivoting back into haunting territory, this time with Lana Del Rey's Young and Beautiful. The chordal pads in the first verse and chorus turn into a swishing rush of water in the second verse, again demonstrating the group's newfound devotion to momentum.

Things drop off a bit with the next two tracks, but the group rediscovers its groove on I Lived and Stay With Me. The former is warmly inviting, driving, and hopelessly addictive. The latter is beautifully constructed and mixed (kudos to The Vocal Company), with a breathy and atmospheric texture and stunning attention to detail (little moments of wonder permeate). It is a rare case where I enjoy the pure sonic soundscape of an a cappella cover more than the original, but that is what Vocal Point accomplishes here.

In RARB's Momentum reviews, my esteemed colleagues referred to the group's "vision" and "refreshing" approach, but I just didn't see it. Phoenix is the album I wanted from Vocal Point, and it was well worth the wait.

I had the honor of reviewing Vocal Point's last album, Momentum, and can say confidently that if you enjoyed that album, then Phoenix keeps it going in all the right ways.

As a group, what Vocal Point executes flawlessly is the infusion of the soloist and the background voices across any number. The synthesis is first rate, and it makes even what would seem like standard arrangements (which are a rarity on this album; most of the creations are innovative and entertaining by themselves) pop and stand a head above. Ghost in particular utilizes syllables to stay fresh — an uncommon "bai yah bap bah" cuts through the texture in just the right way. The musicality of this group is something else as well. Microdynamics and directed swells keep you hooked as they lead into some dramatic chord shifts and perfect descants. Break Free is the gem of this album, making fresh changes and energetic choices, but still including the indicative moments you wait for when Ariana Grande comes on the radio (chiefly the whistletone riffing! Thank you for that, Julie Peacock). I Lived deserves special recognition as well; I've come across this song more than a few times this year and it gets stale quickly. However, through the simple choice of incorporating the entire group into the solo line, Vocal Point keeps listeners from getting bored. Each pass off gives a little pop to the song that drives it home, and lets you inside the sound that is Vocal Point to tie the album together.

I have some gripes. Baby Don't Lie is merely average by comparison and breezes by pretty quickly. I enjoy the addition of the treble descant leading into the choruses of Shut Up and Dance, but it tends to distract from the melody. Shut Up and Dance is also a very deconstructed arrangment, which I like because the percussion sounds like a human (wish I knew who it was), but it doesn't mesh nearly as well stylistically with the rest of the album. Also, Take Me to Church drags a bit at the end, and I'm not convinced using it as the kick off track was the wisest choice. I'd have opened with Break Free, as it not only informs you to the style of the group, but it's also a stellar offering. After that, closing out with the beauty that is Stay With Me would have perfectly bookended the product between the big hits.

But I'm nitpicking. The guys and gals from the University of Delaware have done it again, and I'm loving it. Easy "5".

If Vocal Point hasn't wound up on your a cappella radar over the past couple of years, it's fairly safe to assume that you're either deaf or living under a metaphorical rock. The University of Delaware co-ed group has rocketed into the spotlight as a collegiate powerhouse over the past few years. The group made its defining mark in the a cappella world when placing third at ICCA finals in 2014, only to go home and release an album (Momentum, which was very well received) the next day. It stood to reason that Vocal Point created a pedestal for themselves that was at a very high level. I expected them to wait a few years before trying to stand on it again. However, instead of waiting, Vocal Point dared to go bigger, and that resulted in recording Phoenix, an album I believe to be one of the best a cappella productions of 2015.

Across the board, the arrangements are that perfect mix of familiarity and complexity. Too often groups either try to follow the original recording to a tee or try to put so much of the group's spin on it that the original recording no longer exists at all in the resulting cover. While groups have had success with both of these methods, Vocal Point chooses neither method. Instead, the arrangements often follow the original recordings, but smaller to medium changes are bountiful across the album. Consider the opening thirty-four seconds of the album. The recurring "Amen"s are not from Hozier's original recording of Take Me to Church. Jon Smith and Christopher Given Harrison set the stage by utilizing music reminiscent of Gregorian chanting. These reimagined introductions, such as in Ghost and Shut Up and Dance, are a great way of setting the stage for the individual tracks. There are also smaller changes throughout other songs, like many of the small chord embellishments that appear throughout Break Free. With these smaller to medium-sized changes appearing constantly and consistently throughout the album, Vocal Point creates a sound that is entirely its own. This sound is both easily digestible for those that are new to the a cappella world, and musically complex for those that aren't. It's a difficult middle ground to find, and Vocal Point has definitely found it.

Phoenix is just shiny. There's no denying the level of talent and work put into in this album. Vocal Point found its sound and stuck to its guns. This isn't the cutting edge of a cappella that everyone will listen to for the next six months trying to copy; this is going to be an album that everyone can listen to for the next six years and still be content to listen to again. This is the album I would play for someone who has never heard a cappella music in their life. It's easy to appreciate but hard to fully understand; it's simultaneously stimulating and relaxing. It's an album I expect to enjoy for years to come.

Phoenix is available on iTunes and Loudr.