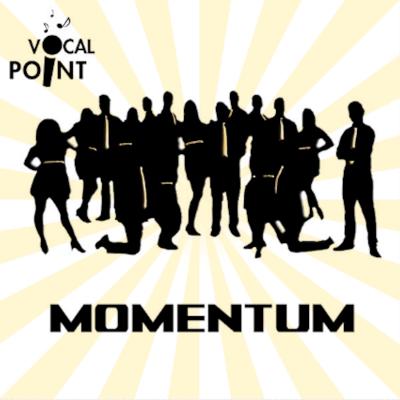 Momentum is generally defined as (1) the strength or force that something has when it is moving, or (2) the strength or force that helps something to continue or to grow stronger or faster as time passes. Momentum, the debut album from the University of Delaware mixed group Vocal Point, seems to hew closer to the first definition than the second. While there is a sense of movement here in the track selection, which offers popular songs from the past six years, it is the group's first album and thus difficult to tell whether or how the group has progressed, at least in terms of recorded music. For a debut album, Momentum is slightly above average, with some nicely textured arrangements, attentive (and sometimes cautious) production, and a few talented soloists. In comparing it to the larger body of contemporary a cappella recordings, however, the album fails to capitalize on some promising potential.

Although the album starts fresh, at least in terms of the vintage of the source material (Wrecking Ball is recent, but not necessarily "fresh" in the a cappella scene), it runs into problems fairly quickly. While the lead track teases nice textures in the introduction and first verse, the chorus is big but still underwhelming. As Catherine Lewis noted in her review of the single, the choruses just sit there, dragging down the energy and movement of the song. It is a shame, because the beginning is great and the bridge is interesting as well.

The pervasive flaw of the album (ironically) is a momentum problem. The tender, invested solo by Crissy Aloisio on City is severely undermined by the draggy, lethargic performances underneath it. Wake Me Up has a nice beat change in the middle of the arrangement but still feels interminable by the following chorus, until it later hits a nice ending breakdown. There are a few songs with some sparks of energy (Good Girl and My Songs Know What You Did in the Dark), but the overarching feeling is an album of mid-tempo tunes which tend to stall around the 2:30 mark. Sometimes it is better not to interrupt the driving rhythms for a wash of cool chords or you risk stalling out.

As with most collegiate albums, there are a few strong solos (Aloisio on City, Brooke Bartolo on Good Girl) and a few weak ones (In This Moment, Wake Me Up), with the rest falling in the middle.

There are things to like here. The arrangers understand that charts need texture and variety. There are intriguing sounds lurking in the background like the electrionic pads in Give Your Heart a Break and colorful techiniques such as the slide into the chorus on Dark Side. The percussion is varied and solid throughout the album.

Momentum is a promising debut album for a group which has been around long enough to be listening and learning from its contemporaries. If Vocal Point can find a way to build on this promise with sharper, more energetic performances and a bit more originality and grit, this group will have a lot to offer the a cappella community.

In the midst of so many groups who produce arrangements that sound too similar, it really strikes a chord when something refreshing comes along. Momentum is indeed that thing. I cannot get enough of how original this album is — the sheer energy and detailed arranging that went into delivering these tracks help it to really stand out among other current works. Vocal Point from the University of Delaware really has something worthwhile with its latest release. While I have to deduct a few points from Momentum for consistency, I'd be doing the a cappella community a disservice if I didn't tell everyone how stellar this project is.

For starters, Good Girl is the best track on the album. There, I said it. Whoever this Brooke Bartolo is, she has some killer vocal chops as she powers through each refrain. The song pulses with energy from top to bottom, leaving the listener with no choice but to stomp and clap along until the very last beat. What's even more impressive is the culmination of the pop/rock feel with a bit of country to give the song a unique vibe.

Let's talk about energy. Vocal Point knows how to use it very well. In terms of energy over the span of an entire album, this is the best use of it I have heard on any album this entire year. From the bass drop of Wrecking Ball, which is insanely good, to the hard hitting snares of Give Your Heart a Break, this album is never without energy. Even the darker-toned tracks like City make a strong statement about it. City proves that Vocal Point has the ability to showcase a somewhat reserved side to be emotionally compelling before building up intensity at the end.

The arranging is commendable, and is indeed what makes the album so refreshing. From the small nuances, like starting a song with a single voice or two, to the small movements in chords as other parts drop out, there are so many creative moments in Momentum. Jon Smith and Nick Wright (a current RARB reviewer) have laid a terrific foundation for Vocal Point to succeed.

I'll admit there are a few moments when I'm thrown for a loop with the group's choices. The lead is too operatic for my liking on In This Moment. In the later half of the album, there are inconsistencies with the level of percussion, such as in Wake Me Up. But overall, these are small issues.

While not every song is a "5" on the ranking scale, the entire project is very deserving of that score. Momentum hits the right notes, literally, in nearly every category. At times, it does teeter between a "4" and a "5", but after giving the album multiple listens that it steadily grew each time. For this reason, you need to grab yourself a copy. Like, now.

A look at the track list here creates a set of expectations and stereotypes. The generally accepted standards of pop a cappella lead to a bored anticipation of what is to come: a vision comes to mind of adequate, direct replication of the originals.

Then the product blows those expectations out of the water and leaves me feeling foolish for being prejudiced.

Momentum is stellar. Period. The album boasts a familiar set of songs done in entirely new ways, raising the bar for the art of covering pop music. The group owes this particular success to arranger Jon Smith, whose innovative attention to detail engages you from the first chords of Chasing the Sun and doesn't let you go until the last notes of My Songs Know What You Did in the Dark (Light Em Up).

Smith excels in expanding backgrounds, avoiding the pitfall of duplicating the original instrumentation. His backing vocals pass the baton of focus in the space between the soloist's lyrics, bridging the gaps with beautifully stacked chords and commanding your attention with lyric echoing across a well-constructed melodic fill. City is probably the chief example, ensnaring you in the bridge with the exceptional text painting of "calling out", and the echoes of "fade" building from their gentle dynamic with beautiful shape. Smith also is incredibly proficient at creating sliding chords, knowing which ones that Vocal Point can execute with the most enthralling precision. Dark Side employs them flawlessly, using the unexpected shifts to swell into both the gentle moments of introduction as well as the heavy emotional sections near the climax. If We Ever Meet Again is his crowning jewel, stylistically speaking. Pop/dance music can be the hardest to make something of in a cappella, or at least something that truly demands that it be dissected. The well-executed dynamics complement the lyric echoes and sliding chords perfectly, especially with the lead-in to the unexpected key change (I despise the use of key change just for key-changing sake, but this one was natural to the progression of the piece).

The only downside to having Smith arrange 91% of the album is that you get used to his skill set quickly, and then you begin to anticipate the next trick. It's stellar on the first listen, but it can get old in repeated listens once you catch on.

Kameron Ghanavati deserves a shout-out not only for owning a difficult David Archuleta ballad like "In This Moment", but also for not compromising his own instument to mimic him. It's refreshing to hear a vocalist with evident training be honest about his instrument, as opposed to attempting to emulate the original artist. Chrissy Aloisio also gets to show off her range of skill, demonstrating her exceptional control and strength in a soft dynamic context for City, and then coming back for the belty power anthem that is Dark Side.

The production work has hiccups. Sam Hitchell gets garbled by a bad echo effect in the chorus for Wrecking Ball. The basses, while tuned brilliantly, are pressed to sound like an electric organ rather than singers making syllables (unlike the treble voices, who are beautifully real while being clean and sparkly).

Pay attention to these guys and gals; they'll be setting the bar for college a cappella pretty soon.