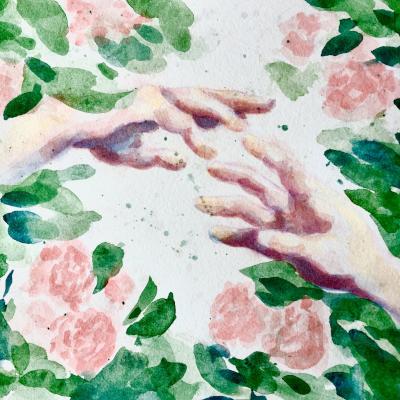 Some groups excel at the task. These groups do what needs to be done, and the greats do it even better. They may do it with a little twist. They may do it with a satisfying homage. Aha, you say, I love both of those things. They take what you already know and love and serve it to you. They are the click/like/follow machines of our day. Other groups, rare groups, throw the rules out and redefine the genre. They make old sensibilities seem hopelessly dated. They shock and soothe: all of what you expect is burned to the ground, but fear not; what rises from the ashes is so much better. They give you what you didn't even know you needed. Voices in Your Head is decidedly the latter, and a cappella is better off for it.

In terms of dynamics, tone colors, source material, interpretation, tempo choices, and stylings, the tragically too short Begin Again is easily one of the most original a cappella recordings of the past decade. What's more, it is emotionally compelling. Choices can be brave. They can can be unexpected. But for some artists they can also leave the listener more puzzled than exhilerated. Voices in Your Head doesn't suffer from that problem. This group's boldness is a burst of energy: it is music made anew. This originality would have been enough. The talent of the soloists would have been enough. The dynamic approach to music making would have been enough. The combination is a constant wow.

It's a near impossibility for democracies to produce art like this. The desire to let everyone have a turn, to temper the extreme choices, to be popular and deliver the surefire hits is too great a temptation for most groups. It's the fuel of the mediocrity machine. To escape that black hole, you don't just need a visionary; you need one that's empowered. You need a group willing to jump off the cliff together.

Enter Will Cabaniss, music director from 2016-2018. He wrote the music and lyrics and arranged Between Us, Part of Me, Sing for Myself, and How Long; and he arranged every other note of the album's mind-blowing covers. Along with Bri Holland, he also recorded and co-produced every track. He also solos beautifully and powerfully on How Long. He's a wunderkind that knows how to make his fellow singers shine.

Voices in Your Head is technically a collegiate group; but in every way that matters, these singers are professional artists, worthy of the fullest critique and the highest honors. "For a college group" simply doesn't belong in any sentence describing this achievement.

If you don't hear Begin Again then you don't really know what the cutting edge of a cappella sounds like today. Don't make a recording or enter an a cappella competition without first checking out this work of incredible skill and rare beauty.

Here's the tea: Begin Again by University of Chicago's Voices in Your Head borders on being a masterpiece. It is a concept album so invasive that "earworm" doesn't aptly describe the music that you are listening to. These songs are soul-worms — the most bioluminescent that can be humanly mustered. Producer and music director Will Cabaniss and the production team, as well as every artist present on this album, bled so much life into these words and notes and blips and pings and crackles that "breathtaking" comes across as a trite descriptor for something that moves me so much.

It's a concept album based on the inevitable reality of being in a college group: for the most part, after every three years, it's a completely new group. For those groups which allow freshmen/first-years into the family, they both adapt to and challenge the traditions that are held so dear by those graduating seniors in their swan song performances. With each new iteration of performers, they must begin again — creating new memories, new meanings and new music.

This new music, though, stands on the shoulders of their forebearers; most notably Chris Rishel. I've already mentioned how the first single off of the album, Sing for Myself, has remnants of Rishel's arranging style throughout. The homage being paid to him becomes even more noticable when listening to the album as a whole, especially in the chords and voicing of Revolution. Which is not to say that Cabaniss as an arranger has simply copied Rishel; no, he gives his "teacher" the ultimate compliment in taking what he's learned and expounding upon that foundation with his own artistry and creativity.

Four of the seven tracks were penned by members of the group, and all of them are gems on their own. There is rock, jazz, gospel, pop, electronic in sweeping ballads, to emotional dance mixes. Each track is its own unique experience while being so inextricably reliant upon what's come before it and after. As the composer and arranger, Cabaniss deftly interweaves lyrics and rhythms from the songs into each other, often giving a sense of the past propelling the current forward. A quibble: I think thematically that the album should have ended with Sing for Myself tying everything together into a synergestic bow.

I love all the singers and soloists to the point that giving individual shoutouts renders the point of doing so useless. They are all amazing and evocative and captivating, whether that is from clarity of tone or heart-wrenching honesty or vocal dexterity. They all master these songs as if their lives depended upon perfect execution to tell the story. Okay, I lied; I still love Theodore Bourget — he explodes my heart. And I'm just angry at Cabaniss again for being able to do ALL of the things that he does with aplomb. Fairness has flown out the window. But it is the pairing of Ire Olagbami and Alexander Daibes on Mercy / Angels that is a godsend. The parallel and synchronized runs these two perform is not humanly possible. And yet, again and again they let the notes trip both deliberately and effortlessly throughout the song. If you do nothing else this year, listen to 1:30-1:52 on repeat and (first rejoice) whimper at the paucity of talent that you actually possess. Yes, it's that good.

And now it's the laying of the truth bomb: I did not like this album the first few times I listened to it. Oh that's cute, cool chord there, that's a fun lyric, ah Theodore, ooo that's a little scratchy and forced. But then bam! I was dumbstruck and dumbfounded. This is music. This is me. And I began again.

Why is Voices in Your Head so successful? For countless reasons; but this go-around, it's because the members understand that they, and their music, are on a continuum, as so eloquently expressed in the liner notes for Begin Again. In his musings, music director Will Cabaniss recognizes that a collegiate a cappella group is never the same twice, with new membership and new songs continuously cycling through. The singers, the songs, will always begin again.

Today, we are given an astounding, history-shaking recording from Voices in Your Head, interpreted this particular way by these particular Voices; though perhaps future Voices, currently still in high school, perhaps still in grade school, will pick up these scores years from now and tell us a different story. What we really have here is Begin Again: The Musical, and we know that casting changes everything. The opening curtain reveals the musical's relationship in Between Us, an original by Will Cabaniss and Kate Connors, and yes, the players start in conflict. Good news for the audience, because tension — increasing tempos for urgency, dropping unexpected chords for emphasis, continuously edging toward something major — is Voices in Your Head's speciality. Cabaniss continues his storyline with Part of Me, where the vocal lead admits she wants out. And then, the self-love revelation that is Sing for Myself from Cabaniss and Ire Olagbami. RARB already reviewed this work as a single, and I can't imagine a more perfect standalone — in fact I only heard this song by itself, many times over, before hearing Begin Again. Finally understanding how this steadfast anthem fits into the album's concept is just so satisfying, strengthening the impact of that first goosebump-inducing line born out of the murmurs: "Out of the fallen trees we sing...". Will Cabaniss wrote that he hopes the songs on Begin Again will have afterlives. Given the reactions I've heard about Sing for Myself — from those who say it was released at "just the right time", to others who say it provides a kind of musical clarity they always hoped for — here's a song that's already started its afterlife, living at first with the group, and now meeting other people along the way.

Voices could have stopped its self-empowerment message right here as a three-track EP, and it would still be lauded for its artistic merits and original value. But lucky for us, the musical gets another act.

The story pivots to reflection, and perhaps a bit of doubt with How Long, unique for its dialog that occurs not between two, but three. But ahh, the Revolution, where we learn that "the worst is over". Lastly, sung mostly in question form, the ensemble (sans solo) asks the time-old question: How Deep is Your Love? before bringing spirituality into the theatrics with Mercy / Angels. Poignantly, the curtain closes with the words: "Heaven only knows. Arise, arise."

Yes, it's time to stand and try again.

That's how I read this music, all poetically stitched together with rainbow artwork reminiscent of the iconic Voices in Your Head legwear, on an album completely filled with near-tangible textures and spaces that you'd expect to see realized only in visual art, not recorded sound art.

Perhaps, however, you'll hear it all differently, as it's meant for all of us. Though I am certain of one fact. This project is as boundary-pushing as we've heard in collegiate a cappella, due in large part to three sets of creation-makers: visionary Will Cabaniss for letting courage and curiosity guide his music; producers Bri Holland, Bill Hare, Ed Boyer, Ted Trembinski, and Dave Sperandio for asking, "How can we push this even further?"; and Voices in Your Head for demonstrating a self-awareness and quest for greatness beyond this particular recording, and beyond any particular member in any one collegiate group. Together, these musicians have created a release that'll likely walk with us for the long haul, beginning over and over again.