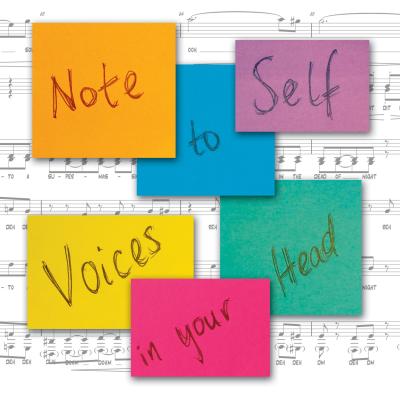 It's been since 2002 that RARB reviewed a Voices In Your Head release. (The U. of Chicago group never submitted 2005's Songs For Padded Rooms). 2002's release was average and that year's soloists took the brunt of the reviewers's weak marks. 2008 marks a distinctly new cast. Note to everyone: Note To Self may be the Voices's best release yet.

Shut Up and Drive is easily the new Voices's zenith. Listeners will worship the tantalizingly aloof delivery of sexy belter, Miranda Meyer, and delight in the rich and spacious textures arranger Zack Madden provides. Clever, tasteful production makes this track the complete package.

If only the entire album could have sparkled as brightly as this diamond. Alas, we get a few cubic zirconia. Let's start with the semi-precious.

Crazy's lead, Elspeth Michaels, lays down a bed of smooth riffs that, along with the open arranging, gives this track a cozy quality. Sona Thinakaran Lisa Loebs us into batting our eyes in puppy love during The Way I Am. Given the song's cavity-inducing lyrics, a less charming lead could have been left with a sugary mess, but Sona's sweet serenade makes a trip to the dentist a small price to pay.

Now, the cracker-jack. I Will Follow You into the Dark's lead must have been off-pitch when he laid the track down. When the lead was later pitch-corrected in the studio, the result was riddled with artifacts. To be fair, if you don't listen for it, you might just enjoy the track's folksy gestalt, blissfully unaware. But once you do notice the artifacts, it's all you can hear, and nearly as bad as leaving the lead out of tune. The problems occur primarily at the song's opening so if you can get through that, you'll get to enjoy the ending.

Though Magic was selected for the 2008 Voices Only compilation, I wasn't blown away by this track. It's harmonically interesting and it demonstrates a good blend and musicality. But some of the syllables are a bit overemphasized ("dah dah dah nah doo doo" just can't be important text. Contrast this with the brilliant phrasing of "moon" in the back-ups.) The backgrounds occasionally overwhelm the lead. The basses scrape for their lowest notes. And the lead has a juvenile quality that doesn't quite sell the song. The sopranos are too loud in their descant and the semi-classical tone color that's demanded by the piece just doesn't sit comfortably with the singers. And finally the end of the song is an abrupt stop. Magic's chords and phrasing make it a good listen, but it's a far cry from greatness.

All in all, Voices In Your Head has done some excellent work on Note To Self. It's not perfection, but it's undeniably an album to be proud of.

Voices In Your Head sounds professional. They sound professional in a way you'd think no college group could reach (even in the current age of studio wizardry). First of all, they are ten members strong. Strong may not be the correct word. Mighty? Yes, they are that, too. Solid? Surely. They are beautifully simplistic on ballads and evoke the ghosts of spiralmouth throughout. spiralmouth? Did I just compare a collegiate group to the grittiest and most mind-blowing a cappella act of the last decade? Yes, I did. They forced me into a corner and practically forced me to utter the words.

Don't count on getting spiralmouth in its entirety with Voices In Your Head, but I dare you to listen to lead track Supermassive Black Hole and not conjure images of the group that rocked my world several times over with their rendition of the Beatles Come Together. Voices In Your Head, out of the University of Chicago, have just raised the bar for collegiate groups. They do with ten voices what many collegiate groups struggle to accomplish with sixteen. In fact, I've never heard a collegiate group accomplish the sound captured on Notes to Self. There, I said it.

The track list is collegiate through and through with offerings from Rihanna, Death Cab for Cutie, Gnarls Barkley, KT Tunstall, Justin Timberlake, and a Ben Folds Five tune for good measure. I was prepared to hear more recycling of these popular artists, but what I got was innovation.

Voices In Your Head is innovative in a way you may not notice. The group is unique in its ability to do more with less through arranging. Chris Rishel is a supremely rising talent with credits on opening and closing tracks by Muse and Ben Folds Five with a flair for the dramatic in completely different styles of music. There are eight different arrangers on an album of ten tracks which are all equally impressive in their own right. Most impressive to my ears are the way the arrangers of the mid-tempo to slow songs keep my attention. Raphael Wilson does an excellent job of layering and offering diverse textures in The Way I Am, a potentially boring number by the second verse. And while the arrangers are innovative in their technique, they may benefit from a little more creativity as the arranging doesn't move beyond the structure of the recordings they're copying.

The soloists of Voices In Your Head are all on the same playing field with a sense of equality in talent level from song to song. While I enjoyed each soloist equally, I felt an extra attachment to the timbre of Sarah El Mouatassim Bih (Hotel Song) and Sona Thinakaran's (The Way I Am) voices, who step to the microphone with complete honesty and vulnerability.

It helps that Voices In Your Head draws studio help in some form or another from the likes of James Cannon, Ben Lieberman, Ed Boyer, James Gammon, and Dave Sperandio. I can't help but feel there are some pitches and rhythms intentionally left imperfect, giving the album a very human feel. The production seems to provide a warm, safe environment in which the group can express itself.

Notes to Self provides a fairly complete package as far as this reviewer is concerned. My parting words to Voices In Your Head are: "Keep on doing what you're doing."

One of the biggest challenges any performance group faces is coming to terms with its strengths and weaknesses and choosing material appropriate for its abilities. It seems that Voices In Your Head hasn't quite figured this out yet, and as a result their latest release, Note To Self, is largely a hit-and-miss effort.

Judging from the material on this record, Voices In Your Head puts a great deal of responsibility on its lead singers, because the arrangements often do little to showcase the block's true capabilities. And sometimes the grotesquely aggressive production masks the finer elements of the group vocals; it's occasionally hard to pick out the individual parts. The problem with this tension is that soloists mostly range from below average to average. With little else to get your attention, the tracks often fall a bit flat. The entirety of Hotel Song is a prime example of this: a simple moving bass line, "oo"s and "ah"s from the block, and a rather uninspired solo leave little to redeem this track other than good tuning, which is fortunately consistent throughout the record. But even without intonation problems, many of the soloists can't bring their songs above average territory, either because they aren't appropriate for the material, or they just aren't particularly strong vocalists.

If you listen carefully, however, you'll hear a group that really does pay attention to detail, and when the block is able to shine, it's clear that the members are exceptionally musical. The strong, full-bodied tone and natural dynamics in Magic are considerably powerful, which hints that these singers are more than capable of producing high-quality tracks given the right material. I also found the lead on The Way I Am to be quite pleasant, and the female voices are refreshingly light and pure, making this track a very welcome break from the ultra-compressed, ultra-heavy tracks that precede it. In general, the block is the strongest voice on the album, because it pays attention to musical intricacies and sounds bold and unified. It shouldn't be shoved so far onto the back burner all the time; the group would thrive on more interesting and complex arrangements.

If you're an a cappella purist, beware this record, because it certainly made liberal use of ProTools and its many magical effects. Truth be told, I wouldn't really recommend this album to anyone who isn't already a die-hard Voices In Your Head fan, because the few moments of above-average material don't quite compensate for the inconsistent solo work and mediocre arrangements. But if you absolutely need one more cover of Crazy and What Goes Around.../...Comes Around in your a cappella library, rest assured that you need look no further than Voices In Your Head's Note To Self.