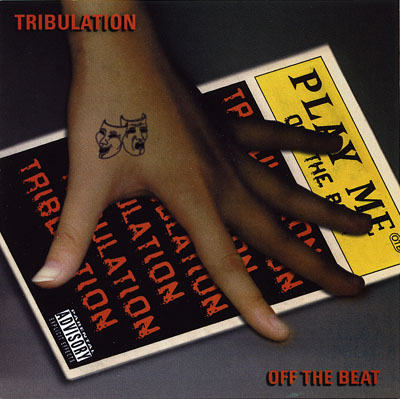 Off the Beat's tight, edgy, aggressive album, Tribulation, is the latest in a tradition of hard-rocking college a cappella. The album marks a return to form for the Off the Beat ensemble sound, which had lost focus in other recent albums. Tribulation's arrangements are thicker and more expressive, and they give a listener more to hang on to.

Album highlights: the energy and sheen of The Kids Aren't Alright, Jessica Gordon's delicious solos, particularly Wild Horses, and Ian Lear-Nickum's vocal percussion on Otherside. Intermission is a masterpiece of electronica. I've heard nothing like it on an a cappella album, and little in its class outside the full-time professional arena. Fatboy Slim should be proud. The Beck song that follows is a high-energy, U2-esque cover that actually suffers from having to follow such a stellar interlude.

Wild Horses succeeds because the soloist makes it her own, destroying any memory of a template from pop radio. Beautiful Stranger, That I Would Be Good and, to some extent, Promises all suffer from a feeling of mimicry. As long as a listener is thinking "wow, that soloist sure is trying hard to sound like X", it's next to impossible to get caught up in the song for its own sake. In Colorblind, soloist Nate Raab avoids the trap of zooming in on the Counting Crows' vocal tics. Instead, he turns in a sensitive rendition that sets the stage for the ensemble to shine.

Music director Jeff Marrazzo deserves a Grammy for his nine arrangements (10 with Intermission) that set the tone of this album. Each song is a coherent individual, and as a set they complement each other more than most set lists can manage. From the pounding rhythm of The Kids Aren't Alright to the ear-catching, expressive pull-back in Colorblind, this is an album that hangs together as a cohesive whole, a model for cover bands everywhere.

That was my first reaction to the opening notes of Off the Beat's Tribulation. The fake Parental Advisory label warns you that the album contains "Explicit Effects", but I just wasn't prepared for this level of distortion on a collegiate album.

Once upon a time, Off the Beat broke new ground for contemporary a cappella. Over the course of the past few albums, I've gotten the sense that Off the Beat had stopped moving forward. If anything, they've been moving backwards a little bit. The backing vocals, once worthy of close scrutiny, have been getting less and less interesting. I'd been hoping the group would try something new. Well, they certainly did that with their use of effects on Tribulation.

Off the Beat's use of effects is better than some pro groups' use of effects because there's still something human under the distortion. But that distortion also tends to blur out what could possibly be clever vocal lines. Sometimes you sense there's something interesting going on in the arrangement, but you can't hear it because the vocal lines are buried in effects.

It seems like the distortion is there to prove Off the Beat can still be intense. But the most intense tracks are actually the ones without any effects. Wild Horses is an extremely stripped-down arrangement by OtB standards. But it gets a lot of intensity out of the grungy syllables ("dja", "jshin") that were so groundbreaking back when they used them on Flail. That stuff still works, and it's more sincerely edgy than the distortion. The chanting of the words "shut up" in the backing vox of The Kids Aren't Alright is more intense and grabbing than the distortion. The pained harmonies of Beautiful People are more arresting than anything they can create with post-production effects.

Does that mean the heavy use of effects was a bad idea? Not at all. It's something new. It's an interesting experiment. The songs work even though in some instances I feel the distortion obscures the arrangement and the performances. Many of the songs that use distortion use it fairly sparingly. Fast As You Can, for example, is distorted but still clean enough to allow it to have a fleet-footed sound. Most importantly, OtB is careful to include lots of breaks from the full-on assault: Wild Horses, Colorblind, Beautiful People, and the picture perfect That I Would Be Good all give you room to breathe. The more traditional songs help make the more radical arrangements work more effectively.

Still, I hope that this time around Off the Beat doesn't spawn an army of imitators. This could get old very quickly. Groups looking for inspiration would be better off listening to the beautifully unfolding arrangement of That I Would be Good. I don't think it does anything especially new, but it does capture the essence of what made the group leaders of the pack in the first place. I'd be interested in hearing a song on the next album getting this treatment, but I'd hate to see this become the group's new direction — if they head into that murky and buzzing jungle of effects they're bound to get lost.

I've somehow managed to get into my seat just as the stage manager gives the order to drop the lights. Anticipation fills my body and excitement spreads like a wildfire as the curtain rises. I've been anticipating the release of Tribulation from University of Pennsylvania's Off the Beat since getting to review their last two projects, Animal 57 and Patio. A sold out audience, a serene location, and a talented cast of characters have all been assembled to bring this project to life. It's time for the show to begin.

ACT I: The show begins with a very energetic rendition of the Offspring's The Kids Aren't Alright. The arrangement, solo, and energy all get this performance off on the right foot. A standing ovation! After only one song, the audience is brought to their feet, amazed by the vocal professionalism displayed by this young cast.

As the crowd settles back down, the show continues with Wild Horses. An extremely inspired and well-performed track, this one doesn't excite me the way the opener did, nor does it get the crowd going in the same fashion. Polite applause as we wait to learn what will follow.

Rearranged and Beautiful Stranger close out the first act without the audience ever getting too excited. I spot a few yawns from people sitting in front of me. I'm very impressed by the sound and detail in every song, but nothing besides the solos are exciting me enough to remain on the edge of my seat. After the first act, Off the Beat remains impressive, but not that exciting.

ACT II: Okay, it's the second act in the show. It can only go forward from here, right? I prepare myself once again to get knocked off my seat. Off the Beat comes out on stage again and opens with That I Would Be Good. What an adorable soloist!! An inspiring voice and powerful delivery, not to mention her heart stopping smile in the Playbill (aka liner notes). I almost didn't notice that the background is still less than exciting while listening to Abby sing. The lady next to me throws me an elbow in disgust. It seems I'm drooling.

As I contemplate whether or not the lady is her mother (geesh, I hope not), I stay focused for the remainder of the act. Off the Beat continues with Otherside, Promises, and Colorblind. Once again I feel myself being lulled to sleep. Other than the superior solo work in these tracks, nothing is really exciting me. It's an amazing experience to listen to this show, but it just doesn't get me as fired up as some of their past performances have. As Intermission comes I'm left to wonder whether or not to even remain for the final act. I can get a much better nap at home on my couch than in these crowded, uncomfortable chairs. As I begin to stand up to stretch during Intermission, OtB begins singing.

What the hell is this? A techno booty bumper breakdown by collegiate a cappella's royal family? WOW! Yeah, I can dig this. I'm starting to get excited. HEY! I think Abby just winked at me!

ACT III: Off the Beat takes the stage for the final Act with the audience on their feet and clapping after the most exciting intermission I've ever heard. Mixed Bizness by Beck keeps the energy and emotion high. Abby is dancing pretty close to that guy on the left; I'm going to have words with him after the show.

With the crowd on their feet already, we all join hands and sway back and forth during a mellowed but very entertaining version of I Try. Angels Would Fall, Invisible City, and Fast As You Can keep spirits up with an impeccable style, energy, and excitement that were scarce in the first two acts. This point in the show tunes the whole room into what Off the Beat is all about. The soloists are still singing the lights off of the charts, and the background has finally come up to the soloists' level. The big smile on my face begins to turn angry; Abby is definitely dancing with that guy. Ugh.

I make my way toward the stage to keep better tabs on her. As I get there, I'm saddened to learn that the show is coming to an end. The show ends with an emotionally gripping performance of Run to the Water. The phrase Save the Best for Last was invented for this performance. Jeff Marrazzo brings the audience to tears with an emotional and heartfelt performance. The standing ovation for Jeff in the middle of the song almost didn't seem enough after hearing his inspired solo effort.

Off the Beat takes a bow as the audience roars following a phenomenal performance. We're treated to an encore of Beautiful People. Another mellow groove chart finishes the concert on the right note. Speaking of beautiful people, I quickly scribble my phone number on the Playbill as the song finishes. I hold up the Playbill toward Abby as Off the Beat graciously walks off the stage. I wonder if she saw it? Think she'll call? Eh, it doesn't matter. I'll see her when I return again next year.

Order online through Collegiate Acappella or send a check for $17 to: