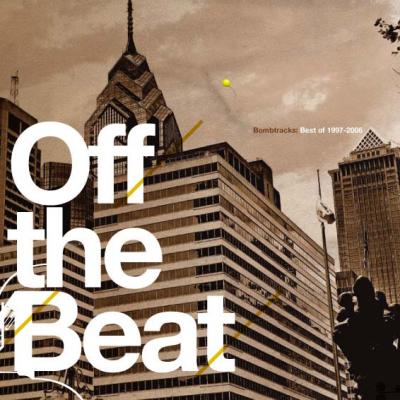 Compilation albums are for newcomers and latecomers first, participants next, and old friends only in passing. RARB and I fall into the third group, having been lucky enough to watch Off the Beat through every step of the 10-year journey summarized here. So I'm going to resist the temptation to second-guess these song choices, or regale you with which songs I liked better the second time around and which songs I liked less. If you've heard the other albums, you have your own opinion. If you haven't and you just bought a 32-song retrospective, the last thing you want to hear is that you missed out on the really good stuff.

Question! strikes me as the archetypal Off the Beat track, with its blaring intro, abrasive energy and seeming absence of catchy melodies. I'd say at least half this retrospective falls into that mode. The rest is more of a grab bag, with the sort of oddities I personally am more drawn to. I still love the blazing electronica of Intermission and the traditional melisma of Vaishnav Jan To, as well as the extremely catchy spoken word of Time and Time Again. Ian Lear-Nickum has a spectacular voice, even if I have no use for Ozzy Ozbourne's Back on Earth, his opening showcase on disc two. Jessica Gordon is another singer whose voice stands the test of time, shining through on Joining You and Wild Horses. Elsewhere on the disc, Off the Beat's signature sound is cause for celebration and a few chuckles, since the busy syllables can be unintentionally funny. Case in point The Kids Aren't Alright, where the opening riff sounds a lot like a warning to present-day Afghanistan: "Oh no, no you been to NATO". The end of another track is more inspiring, sounding more like the call to arms "Glory no!".

Bombtracks Best of 1997-2006 shows the homogenization of the Off the Beat sound, as well as its evolution. Few tracks touch me the way St. Theresa or Soul to Squeeze did, and still do, from the earlier years. For all of that, the music on this new compilation is remarkable. As a retrospective, it's a notable milestone. But I think it makes a stunning introduction.

Many thanks to Off the Beat for reminding me that I am becoming an old, old man. This is the seventh Off the Beat album I've reviewed in as many years, and it covers a lot of familiar territory. The second incarnation of Bombtracks, a disc which covers the last ten years of OTB "best" songs as selected by group members and alumni, is a great anthology for the casual OTB fan while also an unintentional demonstration of the challenges facing groups in modern collegiate a cappella.

Any review of a "best-of" album comes with requisite debate about which songs were and were not included, and Bombtracks will not be an exception to the rule. Most of the hits made famous by various BOCA/CARA recognitions passed muster, although there are a few prominent, head-scratching exclusions (mainly, how did Crawling in the Dark and Don't Stand So Close to Me not make the cut?!) I thought Bring Me to Life was the weakest of three recent Evanescence covers, and I still don't get what OTB sees in the irritating No One Knows. And of course there are any number of B-sides like Bedshaped, Come Here Boy, and Kid Fears I would have liked to have seen here. But the track list hits the mark more often than not, although any album with over thirty songs will have trouble holding listeners' attention.

This is a pretty incredible testament to how consistent the OTB soloists have been over the years. Ian Lear-Nickum's climax on Letdown and Morgan McOwen's anguish on Mama give me goosebumps as they always have, but I'll have to add Jess Gordon's nuanced delivery of Wild Horses and Abby Schneiderman's soaring That I Would Be Good to my playlist. And these are only highlights from a generally stellar lineup, a whiny Crash Into Me notwithstanding.

It's remarkable to hear OTB's evolution over the course of the past decade; though the OTB identity is associated with rock music, many have forgotten that the group once covered Don Henley, Meatloaf, and Jewel before focusing solely on their genre of choice. The group's most recent tracks leverage ever-improving studio technology and approaches to hone a seamless perfection, but sometimes lose quite a bit of soul in the process. Nowhere is this more evident than the sandwiching of Time and Time Again from recent album Float between tracks from No Static (1997). The sloppily tuned and executed Free is a world apart from the menacing precision of Time and Time Again. Yet I was more drawn to the rawness and immediacy of Blood of Eden, which hits an emotional chord that few of the more "modern" tracks achieve. With the bar for production rising higher every year, it becomes even more vital for groups to provide creative arrangements and (re)interpretative solos in order to stand out from a crowd of radio-slick studio creations. OTB doesn't always nail it, but I'd say they rise to that challenge more often than most. And if you disagree, Bombtracks provides over two hours of mostly compelling material to change your mind.

Confession: I've been an Off the Beat fan for years, but I don't own a single full Off the Beat album. You may ask, how is that possible? Well, I'm a poor college student who doesn't buy many CDs. Most of the Off the Beat I've heard over the years has been via friends or on BOCA. That said, OTB's latest release Bombtracks: Best of 1997-2006 is a dream come true for me. All the tracks I've heard and loved since I was a lad, all in one place. The only reason I can think of not to buy this CD would be if you already have all these songs on their original albums. Otherwise, I strongly recommend this collection of some of the best and most influential college a cappella of our time.

I think the coolest thing about this compilation is how well it illustrates the evolving sound of Off the Beat and the qualities that make them excellent. This group is regarded by many as one of the earliest pioneers of the vocal band sound at the collegiate level, and the tracks they have chosen to include here clearly highlight the reasons why. First and foremost, you'd be hard pressed to find an unconvincing soloist on this album. OTB commits to the music they make in a way that's essential to their style. The soloists sell the music, the ensemble backs them up, and this group rocks from its core. Not just one incarnation, but consistently across the span of ten years. That's a pretty amazing accomplishment in my book, and it's probably the single most important factor that continues to make them a groundbreaking ensemble.

There's also a lot to be said about the arranging going on here. Inventive and aggressive are the two adjectives I'd use to best describe what I think is fair to call the signature sound of Off the Beat arrangements. It's on this album in full force, and I'd highly recommend Bombtracks as a primer for budding arrangers to get some of that loud, busy, "jin jah dah no" into your vocabulary.

I'm rambling a little because, honestly, what can I say? This is the best of a group that has been at the forefront of their art for years, and just continues to get better. If you're new to a cappella, this album is a great place to start. If you're not so new to a cappella, but want to own a great showcase of Off the Beat's talent, this album's for you too. Here's looking forward to more amazing OTB in the years to come.

To order this album, visit A-cappella.com