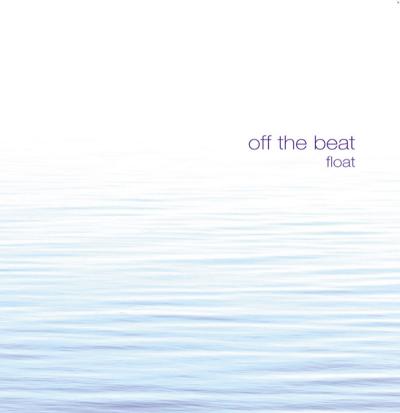 Off the Beat has at long last distilled itself into the pure, distinctive sound we old-timers have always declared the group to have. I find Float a fabulous accomplishment for that as much as anything else — every song incarnates the vintage Off the Beat sound, instantly recognizable despite the newness of these arrangements and these performances.

Distortion, percussion, minute-plus intros that rise, fall, and rise again before the solo comes in — all of these trademarks line up behind a barrage of jins, johs and juhs in the manner to which we have become accustomed. This album reaches a new pinnacle, however. It never lets up. That consistency sets it apart, and makes this album more than just the latest in the line.

Time and Time Again was my favorite cut, because of the hard-driving spoken word verses that break up the familiar and repetitive textures. The rest of the tunes all ran together for me in tides of a cappella modern rock, constantly ebbing and flowing but never really separating out. Likewise, the solo voices were strong but usually not that distinctive. Jonah Platt of So Cold was probably the most memorable of the men, and Rina Goncalves did a great job with Forgiven and her reprise on Broken. The rest didn't register, in a testament to the across-the-board execution and the notable absence of stinkers.

This album's concentration of past trends may make it perfect for newcomers, who are concerned more with a final product than any reference or history that's gone before. For those of us who have already heard the precursors, Float is like Off the Beat always was, only better.

To counter my esteemed colleague's last Off the Beat review, quiet is good. At least, some of the time.

This year's music director Jason Ryterband takes his foot off the distortion pedal, and the trip is all the better for it. Off the Beat also does a better job of varying their repertoire; songs like Let Go and Bedshaped bring some different emotion to the table other than screaming fits. In fact, there's not a lot of screaming on this album at all, thankfully. What's left in the void is the sound of OTB singing again, and singing a lot better than just about anyone else out there.

Float wins where More Screaming and Burn Like a Roman Candle failed by giving the listener some breathing room. The volume variance on songs like So Cold and Passive is accentuated by textured arranging, and OTB even manages to lend some lyricism to songs like Time and Time Again that only increases their accessibility. I could still deal without the ubiquitous insertion of other song lyrics over the bridges of each track, but I'll call it even in exchange for some of the smarter overlays (e.g., strains of Nice to Know You over Megalomaniac, the matching melancholia of Lovesong over the close of Let Go).

A moment of recognition — I've heard Larry Kraut and Jessie Schneiderman turn in some of the stronger solo work among OTB over the years and their senior year swan songs don't disappoint. Kraut gives a plaintive, tug-at-the-heartstrings plea on Bedshaped that turns into an anguished wail on Time is Running Out, more than fulfilling the promise we heard from him on Take One. I've always liked Schneiderman's gravelly delivery, and it works well on the swift and deadly Pain. As usual, the new generation has ably taken up the torch, with Jonah Platt's soaring So Cold and Rina Goncalves' belt on Forgiven and Broken suggesting the soloist well at UPenn is still plenty deep.

Float conjures up different imagery than that of the last two OTB album titles, and the corresponding success of the music makes me hope their next effort takes a similarly ethereal tack. Until then, enjoy the silence (and yes, some loud singing too).

Where there is trendy hard rock, so there is Off the Beat. Respect and enjoyment are very different experiences. I've come to realize that enjoying an Off the Beat album is about genre and arranging preference. I could take or leave half of Float because I don't particularly like these hard rock songs, arranged in a noisy and hyperactive fashion.

The "Leave It" Half:

Do you think song titles like I'm Not Okay and Megalomaniac sound really cool? Do you find yourself listening to bands like A Perfect Circle and Chevelle while playing beer pong with your buddies? Are you someone more likely to call male singers names than to read this review? If yes, then Off the Beat might be the only a cappella group you can tolerate.

What are the tricks to the hard rock OTB sound? Surprisingly few, I think. Most of Float is comprised of several layers of simple rhythms sung well and with real intensity. Many of these layers will begin with a clenched guitar attack syllable, like "j" or "zh" and feature fairly routine eighth note rhythms. At least one of the guitar layers will be run through a fuzz box. The non-guitar lines, usually in the higher registers, are fluid, sustained tones on an open syllable. Choose a hard rock song from the past year's "new thing", fold in enough layers making sure to include a lyrical or melodic reference to a '90s song, top with a rock star solo voice and you've got OTB. Yes, it's getting a little formulaic.

The softer side of Float is spectacular. More Screaming seemed like the strong, silent type compared to OTB's next album, Burn Like a Roman Candle. Quiet, brooding moments of contrast are back on Float, and man, oh man, oh MAN are they freaking good! My favorite is the minimalist version of Fiona Apple's Limp. Nonsense syllables sung in post-modern chord structure perpetuate an otherworldly mood set by just amazing percussion. The vp is swallowy, swampy, jungly — think Dagobah — with froglike sounds, coconuts dropping from trees, and Yellowstone mud pots burbling in time. Arrangers who like to create moods must hear this work.

Muse's Time is Running Out manages a manic groove. Like many songs on Float, the song begins quietly. But where most of the "Leave It" Half of Float treats volume like an on/off switch between verse and chorus, here the soloist and arranger take the time to build tension throughout verses, smoothing things out with disjointed soprano interjections and smooth crescendos in the guitar attack lines. The bassy Nirvana bridge (Come As You Are) nicely breaks up the similarity of the choruses.

Keane's Bedshaped begins with a Lord of the Rings-like soprano intro, accelerating the pace with tight percussion. The soloist, gorgeously voiced, is tenderly expressive, with a wonderful sense of phrasing. He pushes into choruses with deftly swelled intensity. A female deliberately voices falls off her pitches in the bridge, setting the scene nicely for a stunningly toned solo wail. The song finishes off with a lovely off-time arpeggio.

Tufts sQ!'s version of Flicks and OTB's Let Go have convinced me to buy a Frou Frou album. The soloist, with fragile Frou Frou voice cracks, is tranquil yet expressive. The mild yet active tones of the arrangement's higher voices, paired with a plunky and mobile bassline creates a moody tension for this song, as if there's quite a lot under the surface. The entire song is a study in complementary sonic palettes.

I enjoyed Float more than any other Off the Beat album I've reviewed, and I respect the group even more for demonstrating that they can kick just as much ass singing quietly as loud. I'm sure the group's turn to more indie influenced music had something to do with it, as my secret a cappella fantasy is to ruin, I mean cover, only indie bands. Half of Float is stellar and the other half is typical Off the Beat. For most a cappella fans, that's about as glowing a review as it gets.

To order this album visit the group's website or write to:
Off the Beat
c/o Performing Arts Council
University of Pennsylvania
3601 Locust Walk, Rm. 110
Philadelphia, PA 19104-6224