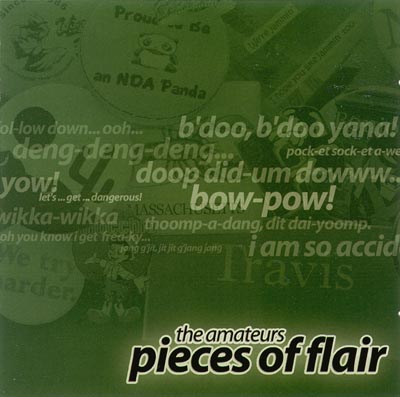 The Amateurs need a new name. They probably don't get paid to do this, but they are quite close to being worth it. With some few exceptions, the songs on Pieces of Flair are better than good.

The album is suffused with a retro, old-school sound. Listening to its twelve tracks feels like being an extra in a self-consciously but unabashedly nostalgic commercial, dipped in sepia and pining away for "A Cappella the Way it Was" (or at least how we imagine now that it was). The album's resonance is just that tension between 20th-century sincerity and 21st-century winking awareness. The album plays as a particularly kind but humorous story, and the audience is in on the joke. If the sound tends a bit too much towards tinny, that is part of its charm.

What doesn't work so well? Soloists are hit-or-miss: males can be flat, a little too nasal in an attempt to be poppy; females a little whiny. But there are standouts. Josh Goldwasser credibly channels Michael Stipe on an incredible original (the album's highlight). Percussion is tight to the rhythm (something not true for all parts), but could have been engineered with a little more punch and clarity. The basses' tone causes them to stand out sometimes where a warmer buzz would have worked better (Beautiful Stranger).

Forget about all that. Over two academic years, the Amateurs put together an enjoyable, charismatic album. Give it a listen, and be thankful for dabblers like these.

The good news is that The Amateurs have come along in leaps and bounds in the last year with their new album Pieces of Flair. Better singing, better tuning, better arrangements...well done, guys.

The bad news is that I still have some serious concerns about the quality of the sound. Most of the tracks on this album come across as noisy and oversung. Part of the problem is occurring in the studio production, with too much echo interfering with the clarity of the sound. The rest lies in the choice of backing syllables. The human voice is capable of an amazing range of sounds, but The Amateurs tend to use a lot of harsh, twangy sounds, heavily layered together, that just sound messy.

The exception to this is Romeo and Juliet, originally sung by the British band Dire Straits. At last we hear some finesse; instead of thundering through the song, they sing! The arrangement lacks the catchy but gentle backbeat of the original, but works well with the slower ballad treatment. This improvement continues into the final track, Hallelujah, which is definitely my favorite track. It has a cool, light feel, with life and flow.

There are two tracks that I really feel the album could have done without. Minutiae is a short block of studio chat, where someone laughs at a dance that one of the guys is doing. Since we can't actually see what he's doing, this is a bit pointless. The Disney Afternoon was a much worse offender. This is 4 minutes and 40 seconds of disjointed and often poorly sung cartoon jingles with way too much echo. The idea is great, and I'm sure that the audiences like it at live shows, but it just wasn't well done.

There is one original on this album, and I always think that if someone has gone to the trouble to write an original song instead of singing someone else's work, then it deserves a mention. Rainborne, written by 2001-2002 musical director Josh Goldwasser, is well constructed, with a catchy chorus that builds nicely. Some of the higher notes are a little out of Josh's range, and he gets a little flat and strained, but I can't blame him for wanting to sing his own work. Hopefully we'll hear more of him after his graduation.

Looking through the track liner, I find that my favorite tracks are all done by the newer, 2001-2002 Amateurs; this may be a result of better singers, or the skill of the new musical director, or both. It's a firm indication that The Amateurs are continuing to grow in skill and confidence, and I'm looking forward to next year's album.

The Amateurs have put together a pleasant, feel-good album for their fans. Despite occasional tuning lapses and sometimes less-than-stellar solos, the group maintains a distinctively warm and cheerful sound, something even the most polished and successful groups out there can't always produce.

Now you ask, what exactly does THAT mean? A great example would be the simple "aw shucks" sound of Andrew McDiarmid on the closer, Hallelujah. While not demonstrating the vocal prowess of some of the best soloists out there, he fits the song, letting some of the backing vocals and block moments take the center spotlight. A simple arrangement capitalizes on the group's bright, warm blend to create a sunny, fun track and a fitting closer to the CD. On the mixing side, an easygoing style with only a few studio tricks helps maintain a genuine and honest sound. The group's eclectic mix of under-the-radar tunes was also a welcome departure from the sameness of many co-ed collegiate groups' playlists nowadays.

What would elevate The Amateurs to the ranks of the elite is a more attentive eye to consistency and nitpicking in the studio. Little tuning bubbles in block and solo are seldom, but substantial enough when they do occur to take a track down a level. Even my favorite track, Hallelujah, suffered from some shrill women's vocals (particularly on the closing chord...why, oh why wasn't that girl mixed down?). And while The Disney Afternoon offers hilarious and dead-on impersonations of Dr. Claw and the Ninja Turtles, its multiple key and tempo changes overwhelm the singers, resulting in some less than stellar moments. The female solos were more inconsistent (a shrill take on Wishing I Was There and the entire Beautiful Stranger solo sung a quarter-tone flat come to mind) than the soothing, if sometimes unexceptional, male turns.

Two of the best tracks on the album are actually covers of men's group arrangements (The Virginia Gentlemen's Insomniac and The Brown Derbies' Romeo and Juliet). The Amateurs translate the sound to co-ed masterfully, using their female voices to add a lush, rich timbre. Josh Goldwasser will leave big shoes to fill next year. His solos (particularly on Insomniac, which I found more listenable than the original BOCA Vol. 1 soloist) were the strongest on the disc, and his original song Rainborne was a fairly impressive outing.

I noticed that the Amateurs thanked the ICCA and RARB in their liner notes, and upon looking at the reviews of their last two albums, it appears they took both praise and criticism in stride while charting an upward trajectory. If they keep up this good work, their next disc will be one to really watch out for.

To order, contact The Amateurs by email at amateurs@restech.wustl.edu.