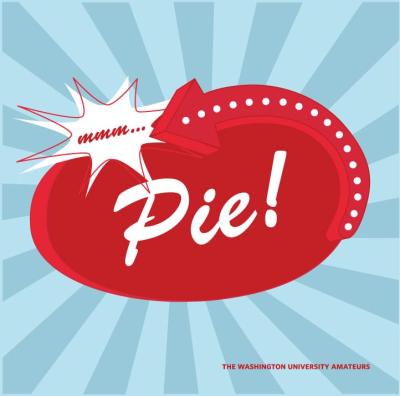 I'd love a warm, baked good with a side of musical personality, if you get the chance. mmm...Pie!, the latest album from Washington University mixed group The Amateurs, left me longing for both.

The majority of singing here is average and slightly sloppy, with far less charm and energy than I remember from previous albums. Emily Flanders brings some grit to Infatuation (though the Aguilera lead vocal gets away from her at times), but the arrangement lets her down. The chorus of Mass Pike begs to rollick and run away with the listener, still ending up solidly in the slow lane. The ballads are generally too slow, with whiny, shrill soprano lines cropping up again and again. Where is the spunk that so captured me on Amateurity and Pieces of Flair?

Perhaps the Amateurs have done themselves a disservice with this tracklist. Awesome covers of staples This Love, The Luckiest, Superman, How Sweet It Is, and Save the Best for Last would probably elicit yawns from the a cappella community at best. The mediocre ones on this album garnered groans from me instead. And let's review once more — comedy songs are exceedingly difficult to pull off on a recording without the benefit of stage visuals. So putting on a halfhearted The Boob Fairy performance, one reminiscent of your least favorite camp counselor on Skit Night, doesn't win any points.

The Amateurs might want to think about flying their freak flag more proudly. In the past, I enjoyed their alterna meanderings far more than their pop staples, and mmm...Pie! is no exception. Just ignore the first minute and a half of faltering falsetto — the raging second half of 2+2=5 wouldn't be out of place on an Off the Beat album. And I thought Anna Swank's Ani DiFranco impression on Superhero wasn't bad, though a bit too derivative.

mmm...Pie! ends with a tragically miscast closer. I happened to be in the audience during the performance of Send in the Clowns that shows up here as a live track. It struck me at the time as a weak song choice made even worse by the high-school chorus arrangement — slow and dirgelike, lurching from overly dramatic pause to overly dramatic unison. And it strikes me now as another example of how The Amateurs need to be more thoughtful about their repertoire choices.

I'd skip the Amateurs table at this bake sale, and hope they dish up something more flavorful next time around.

Mmm, pie. With an exclamation point, as in the title of the latest Amateurs album, it's a declaration. "Yes! Pie! Pie is my choice of dessert. There is nothing more I want than pie!" But after a few listens to this Wash. U. group's sixth album, one wonders if a question mark might have been more appropriate. "Um, pie? I'm not sure. What else is there?"

For starters, there's Amateurity, which all three reviewers (including myself) found to be an improvement over the group's previous releases. Could the Amateurs have hit their peak three years ago? Are they perhaps going through a rebuilding process? It's possible. The songs here fare far worse than even Pieces of Flair, released over five years ago, with mediocre leads and drab performances. But more than the lackluster soloists and arrangements that feature here, mmm...Pie! suffers from a bizarre song selection and even stranger organization of track order that actually takes away from the few niceties heard here.

Take for example, track four, The Luckiest. This love letter has typically been successful when arranged for a cappella; the Binghamton Crosbys (on Crabs and Tartar Sauce) and the University of Richmond Octaves (on Corner Pocket) both come to mind. But those versions match the ethos and tone of the original more closely, mimicking what I assume to be piano arpeggios (I've never actually heard the Ben Folds version) with either dims or doos, sharply pronounced with staccato and perfectly tuned. Here, however, a combination of the aforementioned dims/doos and a legato alto "da na", along with a dismal soprano descant that's woefully off-pitch, spell utter disaster. Add to this the breathy male solo who runs out of air at the end of most phrases, and the piece comes out less meaningful and poignant than those performances that paid closer attention to musical execution.

Consequently, Superman comes off more mocking and campy than it should. Following The Luckiest, this piece also utilizes a vocal translation of piano notes that are almost inaudible in the first verse. That it's live, has inaudible basses and a solo who screeches at the bridge, and is unbearably slow also contribute to this dreary interpretation. Live shows can be done well on an album (anyone remember the Amateurs' compatriots Mosaic Whispers and their stellar Strong Enough and Uninvited on Against the Grain?), but the essentials of performance have got to be dead-on. Sadly, with a blah arrangement by now-alum Dan Mandel, Superman doesn't have a thing to fly with.

It's a rarity, though, when on an album with such mixed genres (adult contemporary, alt-pop, alt-rock, humor, and Broadway standards) that the pop songs stand out against the others. I was thrilled with Infatuation, with its build-up of energy and bouncy rhythm. Emily Flanders is a great choice of leads here, and the range of each vocal part is actually appropriate. I like the solo doubling as well, which was a smart decision by arranger Joe Argus, who did five of the pieces here. Too bad that his talent for pop rock — This Love is also a good rendition — doesn't translate well into the slower pieces. Send in the Clowns, an all-too serious and not at all good arrangement, takes to heart its own lyrics: "Don't you love farce? My fault, I fear. I thought that you'd want what I want; sorry, my dear." This strange, almost operatic interpretation might be trying to repeat the success of Amateurity's After the Gold Rush with its trio of female leads. Instead, having the background repeat the lyrics in harmony creates an almost chant-like feeling, and the below-pitch sopranos certainly don't help the situation.

I did find Anna Swank's Superhero interesting; it's not the first Ani DiFranco piece I've heard a cappella, but its fun rhythm, oscillating sound, and cool lyrics keep my attention. Still, there's that damn soprano descant again. I don't know what it is that the Amateurs have with using this a cappella convention, but in almost every case, it doesn't work. Another piece of note is The Boob Fairy, a hysterical ditty about a girl who dreams of a larger bust-size. The arrangement isn't anything to shout about, using a conventional "chang a-chang", but the story will keep you in stitches. Pitting this song against something like Save the Best for Last (honestly, it shouldn't have been saved at all) on an album creates a disjunction of purpose, making it feel less like a complete album and more like a bunch of songs that were randomly thrown together. The Boob Fairy is a great album closer, and should have been made the last track.

There's a lot of need for improvement for this wayward group that seems to have lost its spice. For the Amateurs, pop and alternative-rock (Mass Pike) are clearly where its at, and more emphasis should be placed on getting the group's repertoire to focus around that genre. Sad to say, mmm...Pie! is not my dessert selection this time around. Let us eat cake.

The Washington University Amateurs's latest release, mmm...Pie!, covers three years of Amateurs history, dating back to 2003. As one might expect from such a project, lack of cohesion is the album's biggest fault. Each of the songs could easily be from a different group.

This Love fits neatly into the shiny, processed, Top 40 collegiate a cappella sphere. Superhero is darker and appreciably more ambitious, but the group fails to really commit to the more interesting syllables. The soloist has a stylish, breathy voice, but tries too hard to emulate DiFranco at times. The Boob Fairy is just irritating, thanks to the sloppy execution of the backs and the excessively cute delivery of the solo.

Throughout the middle of the album, the volume knob gets some action, which is generally a bad sign. The group's rhythmic troubles surface once more on The Luckiest — the arpeggios actually sound swung. The syllables don't help, distracting and rather poorly matched to the piano feel, creating tuning and blend issues. Superman is a live track, but despite avoiding most of the typical live recording pitfalls, the group managed to make a tragic error. Assigning the lead to a female was a terrible idea. No one wants to hear soloists strain for low notes. Moreover, this song does not physically function the same way in that range for a female voice. The flip is contrived, the power is absent, and the lyrics don't work. The song is also too slow.

The production cleverly segues from the live track into a live-sounding track, How Sweet It Is. Dan Mandel delivers a terrific baritone solo, though his decision not to sing even once the original rhythm of the hook is questionable. The bigger problem here is that despite Mr. Mandel's stylish lead, the group could not possibly be more square. The bright pronunciation of the "ee" vowel, the overly enunciated consonants, and the general lack of soul remind me of middle school chorus. This problem becomes even more pronounced in Infatuation. The bass and percussion hit hard, and the soloist gets down and dirty, but the female backing vocalists fall unforgivably short. The soloist rocks, and she should have recorded all her own backing vocals.

The blend improves on Save the Best for Last, but the wrong notes in the arrangement and the odd tuning make for a strange listen. It sounds as if some sections of the song were tuned while others were left raw. Mass Pike showcases some cool percussion, but the consonants in the background, while tight, don't line up with it, creating an unsettling feel.

Everything finally comes together for the Amateurs on 2+2=5. Wow. Mixed meter? Yep. Well-executed, weird syllables? Yep. Awesome soloist? Yep. This song is head and shoulders above the rest of the album, and it stands as testament to the group's potential. It should have been the closer for the album, without a shred of doubt. Ending with Send in the Clowns, a song that is pretty hard to take seriously in the first place, immediately following such a wicked cool track, is both anticlimactic and jarring.

The Amateurs obviously have talent. Some better decision-making and risk-taking next time around will result in a much stronger album.