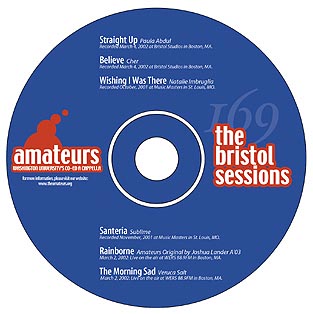 The Bristol Sessions, a six-track demo CD from the Washington University Amateurs, is better than most full-length collegiate a cappella CDs, and certainly most co-ed ones, by an order of magnitude. One might wonder if the abbreviated format and the studio have helped the group to showcase only its best efforts. Not so: the two live tracks are of the same quality as the engineered ones (with some allowance for wandering pitch and blend). The Amateurs are a good group.

Pitch, blend, and timing are usually all good, with some flickers in tempo here and there and some pitchiness in the higher voices, especially and surprisingly in choruses. The singers almost all seem to have energy to spare.

The group is also clever: their arrangements make extensive quotations from other songs, both lyrically and, with more ambition, musically. Listen closely and you'll hear other '80s gems on Straight Up, contemporary boy-band snippets later on, and that staple of "aren't our lyrics clever" songwriting, Barenaked Ladies (worked into Santeria).

At times the bridging of genres works. Soloist Goldwasser brings a country charm to Believe. At times it does not. Soloist Nathanson on Straight Up is too straight-laced; with Ms. Abdul emblazoned in the collective consciousness once again, a little more spunk seemed appropriate.

Soloists are more than decent. The real star here is Josh Goldwasser. He contributes to the album as (in order of appearance) percussionist, soloist, arranger, and composer. His composition Rainborne sounds so polished that for a moment I doubted its authorship.

Finally, engineering is good. The album does not suffer from the glut of flanging or wall-of-sound effects too common in collegiate a cappella.

In short (in very short), The Bristol Sessions is a great collegiate a cappella disc.

The Amateurs had recently sent a pleasant, solid album across my desk, so I was surprised to receive another disc from them so soon, especially since the sampler recycles three of its tracks (Wishing I Was There and Santeria are the same recordings, Rainborne is a new recording) from Pieces of Flair. Seeing as the previous album is already available for purchase, I was highly confused as to why The Amateurs would release this disc for either review or fan consumption. Unfortunately, a quick listen made the answer all too clear — the previous year's tracks are the only things that make The Bristol Sessions palatable.

Two of the new tracks, Straight Up and Morning Sad are bland but inoffensive. One would hope that the group would have taken a funkier edge to Paula Abdul, especially seeing their capability for musical mischief on Pieces of Flair's The Disney Afternoon (and really, pinning your efforts around the musicality of a Paula Abdul tune is probably not the best strategy). The real problem here is that the new tracks suffer from markedly poorer production than the ones from Pieces of Flair, making the discrepancy between the previous group's contributions and those of the current incarnation all too apparent. The warm, feel-good sound that distinguished Pieces of Flair is lost here, resulting in an average effort that could have come from the studios of any number of singing groups out there.

The low point of the disc, Believe, might well be one of the worst repertoire decisions in Amateurs group history. Taking Cher's inescapable dance song and trying to breathe life into what could only be a mind-numbingly repetitive arrangement is daunting enough. Putting a tenor on a song that pushes beyond his upper range (requiring falsetto on the bridge) is just plain illogical. Combine this with poor production, and you get the type of track that makes the listener embarrassed for the group. It is depressing to see the previously commendable Josh Goldwasser reduced to this.

With a solid album only recently released, I'd recommend even friends and family skip this sampler. Hopefully the Amateurs can use the next year to remix this disc, add stronger tracks, and create something they can be as proud of as their previous efforts.

I don't get it. The Bristol Sessions is a six-song sampler consisting of two tracks from The Amateurs' last album, Pieces of Flair; two songs newly recorded at Bristol Studios, known for its a cappella expertise, while on tour in Boston; and two songs recorded live on the radio on that same tour. According to The Amateurs' website, they passed out a copy of The Bristol Sessions to each entering freshman this year at Wash U — a truly great idea. But why on earth would they send this to RARB? It's not a proper album, and much of it has been heard before. They did, though, so I will attempt to review it on its own terms.

I'm afraid that going to record at Bristol probably wasn't worth the time, effort, and money. Both the Bristol tracks (Straight Up, Believe) and the ones from Pieces of Flair (Wishing I Was There, Santeria) suffer from the same engineering problems, namely a dull, unfocused sound and a tendency to mix the lead vocals too low. A common complaint about The Amateurs in past reviews is that their background syllables tend to be intrusive and detract from the lead. This is true here, but I think it's more the fault of the engineers than the arrangers. Groups like Off the Beat and The Beelzebubs routinely use syllables that are just as intrusive, but they get away with it brilliantly because whoever mixes their albums remembers to treat them as the subordinate entities they are. The Bristol tracks sound better than the ones from Pieces of Flair, but they're disappointing given Bristol's good reputation in the a cappella world.

Soloists are a weak point for The Amateurs. Fully three of the six songs feature lead vocals by Josh Goldwasser, including, hilariously, Cher's Believe. And damn if he doesn't pull that off, at least until he gets to the bridge and has to resort to a somewhat thin falsetto. He sounds great on Santeria and his fantastic original Rainborne too. But the three female soloists, Ashley Nathanson (Straight Up), Dani Collins (Wishing I Was There), and Lindsey Raddatz (The Morning Sad), all sound as though they're trying to suppress a natural musical-theater quality to sing songs ill-suited to their voices, giving those tracks a somewhat uncomfortable vibe.

The Amateurs have a tremendous amount going for them. Their arrangements are great; the use of quotes from other songs in Straight Up is nothing short of brilliant. (The only exception is the inexplicable jazz chords on Santeria.) They sing with as much energy as any group I've heard, truly living up to their motto, "Do it because you love it.". Their song choices are wildly creative and eclectic, and they never shy away from taking a risk. What they need to find for their next album is an engineer who can properly capture those strengths. It's hard to appreciate the energy on a track when it sounds as though it was recorded in a cardboard box. The two live tracks, Rainborne and The Morning Sad, though they suffer from dicey tuning, are the most enjoyable on the disc because the subpar mixing doesn't conceal the group's unrestrained energy. Provided that The Amateurs can find an engineer who's as kickass as they are, I can't wait for their next album.

For current ordering information, email the group at amateurs@restech.wustl.edu.