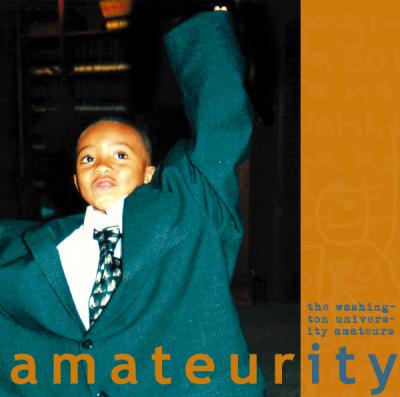 The latest album from the Washington University Amateurs stays a bit too true to its title. Much like the past work I have seen from this group, this album's best tracks are energetic and engaging — you can close your eyes and imagine a bunch of fun college kids jamming in a studio together and making music.

That said, you never really forget that this is just a bunch of college kids jamming together in a studio. Generally mediocre solo work (with stronger work from the men — how often does *that* happen?), arrangements that range from mind-numbingly repetitive to overly busy, and production work that sometimes feels a bit artificial — not exactly hallmarks of excellence. But on the plus side we have an occasionally creative setlist, decent blend and group vibe (again, that genuine, feel-good sound I noticed on Pieces of Flair), and a committed energy running throughout the album. Shall we call it a draw?

Most disturbing moment for me: Believe, a track that made me want to take the group's EP The Bristol Sessions and toss it in my garbage disposal, is made listenable due to some serious production overhaul by Gabe Rutman. No, more than listenable — kind of fun. Straight Up didn't quite reach that height but was definitely more tolerable thanks to Gabe's makeover. I don't know whether to get down at Gabe's altar and worship his black note magic or curse him for demonstrating so soundly that a lot of today's collegiate recordings seem more about the studio and less about the singing. But I digress.

In my notes as I was listening to this album, I noticed I wrote the phrase "weird but good" quite a bit. I mean, Long Line of Cars, Because, and Breakdown are not exactly crowd-pleasing set pieces. That being said, I found myself a lot more engaged by these offbeat choices than the more standard pop numbers. The problem is that at the end of a listen, I found myself respecting the Amateurs, but not necessarily wanting to listen to them again. While the group's block work is generally solid, the solos are problematic — from the weak final female shrieking on I Feel Good to the earnest but overly derivative John Mayer sound-alike. A lot of OK and a bit of good add up to an above average album — but with emphasis on the latter.

I just love when groups listen to me. At the end of my review of The Amateurs' 2002 non-album The Bristol Sessions, I wrote, "Provided that The Amateurs can find an engineer who's as kickass as they are, I can't wait for their next album." Well, for its latest, the group went right to the top of the kickass-engineer food chain, sending its tracks out to be mixed by one Gabriel Rutman. His golden ears turned out to be exactly what the group needed, and on Amateurity the great potential this group has always had is finally realized. (Then again, maybe my review had nothing to do with that decision. Either way, I commend them for it.)

Gabe's up to all his usual tricks here. The two dance tracks, some of the better a cappella dance music out there, have a huge, powerful bottom end, the kind only a master can coax out of an all-vocal recording. His sensitive use of reverb (on Sally Conroy's heavenly descant), panning, and EQ are key elements of Long Line of Cars's glorious weirdness. I Feel Good wouldn't be as explosive if each part weren't perfectly situated in the audio spectrum. The 4 for sound and production results from a couple of questionable judgment calls: the effects on Because are more distracting than trippy, and Love Song for No One, once a gentle lament, is transformed to awkward heavy metal with ham-fisted, inappropriate distortion. For the most part, however, the disc sounds awesome. I have long believed that good production is more important than good singing or good arranging in creating a quality a cappella album, and Amateurity lends credence to my theory.

Yet the vastly improved sound is only half the story. The other half is that The Amateurs have slowly evolved into a flat-out wonderful a cappella group. The group's energy is beyond compare. Every singer understands the musical purpose of his or her part and how to channel his or her energy accordingly. I Feel Good is the most fun I've had all year as a RARB reviewer. And the group's famously offbeat song choices are incredibly refreshing at a time when just about every a cappella group is putting out a cover of Bring Me to Life.

The Amateurs' arrangements are excellent without exception, and Anna Swank stands out as an arranging genius. All of her charts begin simple and tight, but by the last chorus they are so impossibly complex that the listener will spend hours trying to pick out every part. Yet coherence is never sacrificed for complexity. I especially loved the winking self-references on the wonderful I Feel Good (a song I never imagined could work a cappella) and the creative syllables on Long Line of Cars. Anna Callahan's a cappella arranging manual is long past due for an update, and I can think of few better candidates for the job than this Anna.

Oh sure, there's still room for improvement. While I loved Dan Mandel's deliberately sleazy turn on Breakdown, singing an octave below where Tom Petty sang it, I could have done without the out-of-tune guitar solo. In general, soloists continue to be this group's weak point, and I can't understand why the same people who put such focused energy into their block performances sound so stiff and timid on the solo mic. Many favorites from The Bristol Sessions are back here: Josh Goldwasser singing out of his range on Believe, the terminally stilted Lindsey Raddatz on The Morning Sad, and Ashley Nathanson's terrible rendition of Straight Up. Many newer voices disappoint as well. Sally Conroy, so beautiful on high background parts in many songs, is far less convincing in her lower range on Beautiful Life. Juan Chaparro's voice is too thin to take on Guster, and Matt Dorfman sounds like a strep patient on Love Song for No One. This is an area in which I have no doubt The Amateurs will continue to work.

The Amateurs boast the most consistent trajectory of improvement of any group that has submitted multiple discs to RARB. Amateurity is well worth checking out. Nicely done, guys.

I happen to own and have listened to The Amateurs' first three albums. They're kind of nice, they're pretty, they have a few highlights scattered between them. Still, there's a reason the RARB scores continue to increase with each album: Amateurity is leaps above Pieces of Flair (and, I imagine, The Bristol Sessions, which received the same score as "Pieces"). With a better execution of engineering and all things vocal, Amateurity the album reflects the grown-up nature of its title.

From the very introduction of I Feel Good, you know you're not listening to anything like previous Amateurs' productions. The vocals and background are clean and polished with just the right amount of oomph from the bass — pleasantly on-key, I might add — to pump up the sound. Although soloist Olivia Pettit feels a little out of place in the shared lead (it's passed from soloist to soloist in different song styles), the song's overall performance is a representation of what's to come.

There's a nice diversity of artists represented here ranging from Cake and Guster to Ace of Base and Paula Abdul. Particularly moving and wonderfully arranged is the live WERS version of Neil Young's After the Gold Rush. Although I can hear slight pitch problems as I'm listening at my computer, it sounds nearly perfect in my car and on my stereo. The tender trio of Anna Swank, Kristi Williams, and Sara Yood is both haunting and stirring. I've been a fan of Josh Goldwasser as both a songwriter and soloist from way back; his take on Cher's Believe is solid and complete with the same studio-produced vocal turns as the original. Both arrangements, in addition to Happier, were done by group alum Andrew McDiarmid. Compared with some of his pieces before on previous albums, those that appear on Amateurity mark improvements in his talents and are songs he can be proud of.

Not without flaw, Amateurity has a couple of low points as well. Like a lot of other collegiate albums I've heard, many songs here have vocal bridges between verses that seem to emphasize consonants over vowels. For example, while a "zh" sound can be useful in producing a certain effect, there's an overuse of it in Long Line of Cars that's distracting. The Morning Sad is one of the CD's weaker arrangements, with an overemphasis on tempo, overbearing percussion, and a missed opportunity to take full advantage of the group's apparently wide vocal range. The introduction and overall background to Love Song for No One is rather busy with a heavy-hitting, not-quite-on-any-note-in-particular bass line. I could have also done without the cough and breathing as special effects before and throughout Breakdown, which is otherwise well-done.

The reviewers for Pieces of Flair (RARB trivia: I reviewed that album in my application) were highly anticipatory of The Amateurs' next release. Although The Bristol Sessions may not have sated those reviewers' palates for something new and original, I can guarantee Amateurity is the forward step for which they were waiting. The Amateurs are no longer as their name implies.

To order a copy of this album, please visit The Amateurs' website.