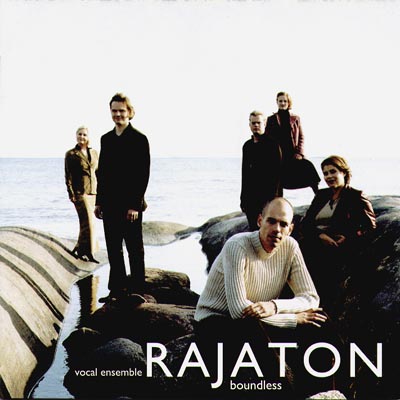 Boundless is excellent, an exuberant a cappella rejoicing. The album brims over with energy, but is ultimately held together by the singers' fine tuning. The sound is lush but crisp, a high-resolution photograph of imaginatively foliaged vocal woods.

Rajaton sounds a bit like the King's Singers or the Swingle Singers at their wittiest; tongues planted firmly in cheek, the group deftly navigates the intricate jazzy shoals of its daring repertoire with practiced aplomb. Rajaton does those groups one better in the crystal quality of their recording, and are aided by the poppiness of their English vowels and background sounds. (The two Finnish tracks rounding out the disc suffer in this respect; as a listener, I can't get a grip on the emotion.)

Especially pleasing are the opening track, We Walk in a Fog (once the soloist is joined by the others) and You Can't Stop Me, the last a bold race saved by the singers' remarkable vocal agility. Less successful is Lady Madonna; the arrangement feels thin.

All in all, a triumphant effort from Rajaton; well worth taking a look.

My knowledge of top-quality Scandinavian a cappella doubles with the addition of Rajaton's Boundless to my listening experience. I always knew that a cappella was big over there, but I didn't realize how well they all seem to do it. Well, at least that's true of baSix (from Denmark, who I reviewed some months ago) and now Rajaton, an extremely talented sextet (three men and three women) from Finland.

For the record, Rajaton apparently means "boundless", making this album self-titled. In the name of their group and album, this ensemble promotes the notion that "the voice is boundless". Accordingly, Rajaton's repertoire — as described in a press release and as can be heard, albeit to a lesser extent, on the album — is widely divergent, with influences from the folk, jazz, rock-and-roll and classical realms. As with so many of the best a cappella groups, the members of Rajaton are trained and experienced choral singers, so their music-making is not surprisingly top-notch.

Unlike the aforementioned baSix, most of the music on this album is nothing you've heard before. Either it was written specifically for Rajaton, or it was arranged by the group's apparent resident composer/arranger/rumbling bass Jussi Chydenius from material you also probably haven't heard before. Original material in and of itself is not too daunting to this reviewer, but these are not the more traditional rock/pop originals of, say, The House Jacks. Only in groups such as SoVoSó have I encountered a similar penchant for tackling unusual source material in unusual musical ways.

So, on to the music. With the exception of a foray or two into jazz and maybe a detour or two into rock/pop, most of the tracks on this album have a classical folk feel about them. If the liner notes (which are extremely informative and helpful, by the way, featuring all of the lyrics, in translation when necessary, and a succinct comment from the group on each song) didn't let the listener know exactly what was being heard, much of this music would have seemed very much at home on any of the King's Singers 20th-century music albums. Poems by Samuel Ferguson and William Blake, as well as traditional Finnish and Irish folk songs, form the inspiration for original musical compositions and arrangements that show the influence of traditional choral techniques with a bit of a modern twist. The music is consistently engaging, if not always thrilling or exciting. It may help to keep in mind Rajaton's warning that the classic Finnish folk song is about being sad and lonely — a fact which no doubt influences the contemplative original music on the album.

My performance quibbles are few. As noted above, the six members of Rajaton are trained singers, and their precision pitch, breathing, diction and blend are on par with the best of the a cappella world. Jussi Chydenius brings a rock-solid, rich bass to anchor the group's sound, and the sopranos have an enviable accuracy and purity in the higher registers. Dynamics could use a bit of work, either within the group or together with their engineer/producer — these folks seemingly never met a fortissimo they didn't like, with almost every song working its way either from piano to a thundering fortissimo or from fortissimo to a thundering fortissississimo. Also, there is room to take issue with the over-precision of the performances. So technically proficient are the singers that certain elements of "feel" and emotion get a bit lost. Perhaps this can be accounted for, at least partially, by the fact that they are singing in what is at least a second language. One need only listen to the final two songs, sung in the original Finnish, to hear a certain energy and passion that is lacking in the rest of the album.

But as you can see, these are minor issues. I, for one, am fascinated to hear what the rest of the world is doing a-cappella-wise, especially when it's this good. If you feel the same way, pick this one up and add an international flavor to your collection.

I must confess that I am always excited whenever I receive an album from a Scandinavian country to review, as they are almost without exception wonderful albums. Rajaton's Boundless proved to be even better than my expectations.

Rajaton is a mixed a cappella group from Finland. All six singers are very accomplished, with beautifully distinctive individual voices that blend together to make a tight sound. They are capable of a huge range of vocal sounds that gives each song its own special flavor.

But they don't only sing. The majority of the tracks are original compositions, all with well-constructed melodies and phrasing. The arrangements are interesting and varied. The liner notes give interesting insight into each song; every song has a story behind it.

I enjoyed the whole album immensely and found it impossible to choose a favorite track. Butterfly is beautifully haunting, Un-wishing Well is catchy with a cute message, and Poison Tree, adapted from a poem by 19th-century poet William Blake, is dark but captivating. Then there a couple of lovely tracks in Finnish, and a really fun version of The Beatles' Lady Madonna.

I can't wait to hear more from this outstandingly talented group.