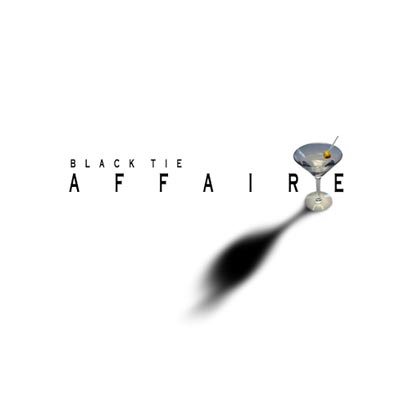 My review of 2000's Interplanetairey concentrated on The Aires' tuning problems and weak soloists. What? Sour chords? Weak soloists? Not this time! Is this the same group? What did they do, shoot the entire lineup and start over?

What's even more mind-boggling is that The Aires didn't suddenly decide to invest in a professional studio in order to make their work better. Unlike their last albums, THIS one (right, the good one) was recorded in BritTrax, the undergraduate recording studio downstairs from the music department at Dartmouth. Let's just say that the usual weaknesses of college-basement studios are not apparent here. The next time Dartmouth runs out of money to support one of its varsity teams, all they need to do is start renting this studio out to other New England vocal groups.

Black Tie Affaire is all about slick production that shows off top-notch arrangements. It's not to everyone's taste — some voicings on Bicycle Race, for example, are so synthesized they barely sound human. But on tracks like the BOCA-featured Working for the Weekend, every moving part in the active arrangement is crisply defined, so the song never sounds crowded or blurred. The percussion throughout is nearly flawless. Don't Come Around Here No More is a masterwork of mood.

So why didn't I give the album a 5? For some bizarre reason, the same production team that does such a terrific job with the instrumentals is hiding the soloists. This choice might have made sense on Interplanetairey, when some of the guys had trouble filling big shoes, but here every soloist lands somewhere between enjoyable and awesome. Yet on track after track, it sounds like the lead is singing from somewhere in the arc next to his buddies instead of grabbing the mike. This is especially frustrating on solo tour de forces like Derek "Juno" Senft's adept New Year's Day. This affected the repeat listenability of the album.

The Aires also have some room for improvement on their raps. The two featured raps here are nicely done, and certainly much better than most collegians (especially Ivy Leaguers) can manage. But The Aires have raised their singing to such a high level that their rap skills suffer a bit in comparison.

All in all, Black Tie Affaire is a tremendous step forward for The Aires. Despite the problem with the mixed-down leads, I have no hesitation in giving this project two thumbs up. On second thought, make that a round of applause.

Ladies and gentlemen, take notice. The Dartmouth Aires have arrived. It's been wonderful to watch the progress that this group has made over the past several years, from the average Airemail to the impressive but flawed Interplanetairey and now to their stellar latest release, Black Tie Affaire. By minimizing extra humor bits, removing traditional numbers, and keeping the number of tracks to 12 finely-polished songs, this great group has released a top-notch product.

The full, smooth sound found on Interplanetairey is still present in full force, complete with the solid bass and the phenomenally utilized and impressively developed falsetto, but they've tightened up their tuning, and the whole group has apparently taken a lesson in wailing even more. They have honed this sound and found out how to best put it to work for them. The CD has a unity of sound throughout: It's smooth, sleekly processed, with a feel that's somewhat synth-poppy, even when covering contemporary alternative rock songs. The percussion (uncredited) is artful, driving, and well-produced. The arrangements are interesting without being overly complex; they often serve as a nice scaffold for great energy, production, percussion, and solos. Adam "oDo" Ballard, a recent alum of the group and the driving force behind Interplanetairey, once again serves the group well by penning over half the arrangements, and he even appears as the soloist on the closing track (he mixed two tracks, as well).

The Aires have fixed my biggest issue with their last release: their soloists. No longer struggling or missing the mark, these guys are now dead on on each track. They're emotionally committed, gritty and rough when it's called for, rocking and vocally skilled. It's difficult for me to pick highlights from this collection of voices that rivals anything I've heard from all-male or coed groups, although I am confident in naming Adam Ballard's guest solo on The Cuckoo and Derek Senft's turns on Working for the Weekend and New Year's Day, as well as Ian Storey's wailing on Jeremy (in order to name someone who wasn't already a standout on the last disc). But in naming these three, I don't want to intimate that the others don't also do great jobs.

Three tracks stand out above the rest to me (though each listener will no doubt find his/her own preferences). Cut Chemist Suite and Bicycle Race each caught my eye before I even opened the disc. "You've got to be kidding me," I thought, "a college group can't pull either of these off as well as they deserve." I've often thought that Ozomatli would work well if covered by a great group, but I would never have expected the hip-hop Cut Chemist Suite to be as successful as their Latin repertoire. These guys cover it with style: a great arrangement, great production (oDo again), and great rapping (although they exaggerate the depth of Chali 2na's voice, rendering it less natural a performance than the rap in Anybody Seen My Baby). Queen's Bicycle Race is reproduced perfectly, with every chord change nailed, every bit of broad theatricality intact. The third standout is The Cuckoo, based on recordings by Taj Mahal. A tour de force from oDo, this track elicits an amazing final explosion of energy from the group, providing one of the more spectacular peaks I've heard from an a cappella group, collegiate or otherwise.

I was shocked when no tracks from Interplanetairey appeared on BOCA. Working for the Weekend was selected for BOCA 2003. While it's not my favorite track on the disc, it's good to see the Aires getting some of the recognition this performance deserves. Look for them to do well in the CARAs this year. But don't bother waiting that long. Get a copy, pump up the volume, and enjoy.

As most high school choir directors know, you usually have one or two guys who sing on pitch, blend with precision, and possess the charisma to be true soloists. From 1996 to 2001 (Adam "oDo" Ballard '00 appears on the album), these high school seniors matriculated at Dartmouth College and joined The Dartmouth Aires.

Such good fortune has resulted in the outstanding Black Tie Affaire, an infectious mix of '80s pop and '90s alternative rock with a smattering of rap to add some spice. This spice requires a warning label, as Cut Chemist Suite retains a couple of bleep-worthy lyrics. This album is a certifiable leap over their last release Interplanetairey — which I judged during the 2001 CARA judging period — in terms of tuning, sound production and soloists. I would like to hear a more consistent use of dynamics to up the group's musicality, but that is a minor point. From song to song the dynamic levels change, whereas I want them to concentrate on making those changes within a song as well. Now that's singing!

Black Tie Affaire opens with the BOCA 2K3-selected Working for the Weekend, an '80s anthem that is even more true today. And mentioning that song, I have to talk about Adam "oDo" Ballard. The guy is everywhere on this album, supplying five solo arrangements, two collaborations and a nifty double duty as soloist on the closing track The Cuckoo. His arrangements simply rock, especially Don't Come Around Here No More and New Years Day, and are the catalyst for The Aires' current level of excellence.

Edward "Mojo" Wenger is the other half of the arranging juggernaut that is the Dartmouth Aires. His takes on Bicycle Race, Anybody Seen My Baby, and Trouble are so on point that he's set new standards for these songs. He can make the Rolling Stones rap, turn Queen into a backwater good-ole-boy band, and transform Coldplay into etheral angels. Wenger has skills that most only dream of.

This upped the ante for the soloists. I am not a huge Blessid Union of Souls fan, but Tyler "Typo" Slade's performance of the very saccharine Standing at the Edge of the Earth stood out for the expressiveness of his voice. The original song is schmaltzy (I really want to say crap, but am refraining), but Slade brings pathos without being pathetic. Kudos. Too bad the backing vocals don't live up to his intensity, falling on the airy, anemic side after a very beguiling opening. Coldplay's Trouble made me weep. I seriously feel like it's become life's blood for me. Rarely do you hear a soloist and song paired so brilliantly and effortlessly as Caz "Bo" Liske and Trouble. Liske's struggled notes in the upper register ring of deft connection to the subject and not a lack of ability. Very seldom has a collegiate a cappella song touched my soul the way this one has. Can I give it a 6? Eli "Gonzo" Jorné and Tim "Toto" Miller have the moxie to pull off very demanding rap songs. Everyone is at the top of his game.

Hanna Stotland said in her review of Interplanetairey: "In sum, the Aires are doing fine. They've got plenty to be proud of, and plenty to work on in the future.". See what happens when groups take our reviews seriously? Truly, our efforts are meant as much as an educational tool for the group as they are to help make patron purchasing dollars go farther (can you tell I work in non-profit theatre marketing?). The Aires took her comments and worked their asses off to create this disc.

Wait! One irksome point: better liner notes, people! Who sang those great duets? Who is that fantastic vocal percussionist? These are your bandmates who deserve recognition. And including the track listing times is sure to please that DJ who wants to play your album.

To order Black Tie Affaire or any of the past recordings made by the Aires, please visit their website.