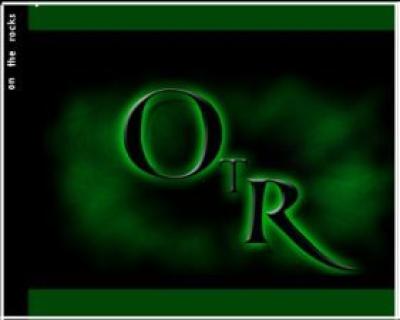 If you casually glance at the song list on a new a cappella CD and find two selections from Guster, but also two from Billy Joel, one from Dire Straits, and one from Billy Pilgrim, but also Biebl's Ave Maria among the tunes, chances are you'll remain a bit unsure of just what sort of group to expect. After you've listened to the CD and found that the Ave Maria and a new, very creative take on Johnny Nash's I Can See Clearly Now are in fact the best tracks on the album, you'll likely be thoroughly confused.

Or at least such was my experience listening to the eponymous debut album from the all-male On the Rocks from the University of Oregon. As the CD's liner notes point, this group made it all the way to the ICCA finals in 2002, in only their second year of existence, but this CD doesn't make a definitive case for why that was. It's entirely possible that these guys put on a helluva live show, but their material and performances as recorded on this CD are still a few years behind the collegiate a cappella curve.

What this CD does feature is an ensemble of talented singers with a generally solid blend. But safe to say, a group of good singers in and of itself does not a good a cappella group make. The group is hampered by a penchant for repertoire which often isn't well-suited to their rather "trained"-sounding voices, and arrangements which are competent, if generally unengaging and definitely lacking in sufficient development and musical complexity to compel the listener to stick with the song beyond its opening verse and chorus.

In the opening five tracks, you'll find two songs (For the Longest Time and Brown Eyed Girl) that simply don't need another a cappella rendition — unless it breaks new ground, and these don't. You'll find another three that are capably performed, but which feel decidedly like watered-down versions of the originals, particularly in the solo voices which, to my ears, would have sounded more at home in a Broadway cabaret. The possible exception is Crash into Me, which is a deceptively simple arrangement by Deke Sharon and features a better-than-average solo and a tight, if mono-syllabic, rhythmic background.

Then comes Ave Maria. I have absolutely no clue what it's doing on this album, but it sounds lovely. Truth be told, the verse-chorus structure of the piece makes it a bit repetitive by the third time through, but the ending (from "Santa Maria" and on) is truly beautiful and made this track my second favorite. Sadly, this is followed by unoriginal takes on two more songs that have been done to death: Change in my Life and Billy Joel's Lullabye. The former is a bland rendition of a song that has been covered endlessly and far better elsewhere (m-pact's being one of, if not the, best) and the latter is sung more as a glee club serenade than a soft lullaby, which really kills the feel of the song. It would be great for Valentine's Day, but no young child is likely to fall asleep to this version as performed.

Luckily, this is followed by the most original arrangement and freshest performance on the album — Johnny Nash's I Can See Clearly Now. The light, fun feel of the song is preserved and a tasteful percussion track is added. The bridge has some terrific precision tuning and the "breakdown" section works very well. All in all, if the rest of the album had shown the creativity and musical dexterity exhibited in this track, a much better album it would be.

Unfortunately, the remainder of the album cannot maintain this standard. The traditional Down to the River is almost as out of place as Ave Maria and rather uninteresting. I Need to Know was a noble attempt, but if you do a Latin-tinged track, it needs a real Latin feel, and not just a solo partly in Spanish. MLK has never been much more than a blending and breathing exercise and put me right to sleep, with Demons and yet another version of Insomniac not doing much more for me.

For my money, On the Rocks has a great deal of potential — they have talented singers and once in a rare while, they put it together for a really solid track. They do, however, seem to be lacking in gifted in-house arrangers (a good number of the tracks are arranged by alumni or other people whose affiliation is not identified, or borrowed from The Brown Derbies). If they can find, train and/or develop a slightly more sophisticated sound and stick to repertoire that melds more seamlessly with their "purer", somewhat straightforward all-male sound, I'll be interested to hear what they come up with next. But as for this album, virtually all of the material can be heard in multiple places elsewhere to significantly better effect.

On the Rocks has got to be a good group. You can't reach the ICCA finals two out of your first three years of existence and not know how to sing. Based on that pedigree, I expected big things out of this disc. So let me preface this review with a declaration: I really wanted to like this album.

The group is still a young one and their first album displays their inexperience. Rushing tempos. Sloppy entrances. And tuning. Tuning tuning tuning. Nearly every song has a pitch problem, and most of them multiple ones. Add all this to a track list of overdone a cappella standards, and it's like listening to a sampler of badly tuned, mediocre arrangements of the "best of" men's a cappella from the last few decades.

Let me reiterate: I believe these guys can sing. The strong multiple solos on The Longest Time convinced me of that, as did the rest of the capable, if unremarkable leads. Peter Hollens, one of the founders, lends a solid voice to many of the tracks. But if these guys have the pipes, why aren't they churning out something better?

Beyond the fundamentals of tuning and tempo, On the Rocks could think more carefully about their arrangements. Most songs are too long (a 7 minute cut of the clichéd Ave Maria comes too mind) and a number of others ended quite badly (the abrupt close to Brown-Eyed Girl was practically comedic). Additionally, they need to find the balance between the rushed, frantic energy of the earlier tracks and the sterile, unenthused sounds on Change in my Life (just about the last song you want to sound bored on).

Recording is a very different thing than performing live, and everyone needs some time to get up on the learning curve. But if On the Rocks expects their next album to earn the same applause they undoubtedly receive at performances, they had better start climbing now.

For a group appearing for the second year in a row at the ICCA finals, I expected a bigger studio production. If you're in a hurry, let me sum up my review in the first paragraph: Take every overdone song that collegiate groups covered in the early '90s, add a barbershop-ish sound, and spoil it with inappropriate arrangements and percussion. I want to emphasize up front that albums rarely demonstrate a group's live ability, and I personally believe that high achievement in performance is a greater mark of talent. However, I'm charged here with discussing the CD, which was altogether dissatisfying.

I was ultimately very disappointed with this album considering On the Rocks' prominence on the national scene. This self-titled CD lacks the pizzazz found in their live stage performances that critics applaud. I'm only slightly impressed with the vocals themselves, the solos are so-so, and the arrangements are rather uncreative. For example, Crash into Me is too fast, giving the repetitive background little time to get every syllable in. The vocal percussion on this song speeds it along even faster, and the arrangement gives the chorus a long pause between "crash...into me" that is painful to the ear. In a nutshell, the arrangements are somewhere between "loyal to the original" and "creative enough to be impressive", leaving much to be desired.

The studio production did not seek to correct the tuning issues either, most evident in Brown Eyed Girl, where the tenors and baritones aren't singing in the same chord. The baritones fall flat, the tenors sharpen. The basses' leading tones in the chorus are slightly off-beat and off-kilter. The blend in Lullabye and Down to the River is choppy and inconsistent.

There are few redeeming aspects on the album. I really enjoyed the beginning and end of the arrangement of I Can See Clearly Now. It's simplistic, but at the same time shows off the barbershop best of OTR. All of the vocal parts sing properly in their range, with the exception of soloist Jason Johnson, who can just barely hit the high notes in the bridge. There's a lot of experimental stuff going on in the middle that misses the mark of "cool" and comes off to this RARB reviewer as unimpressive. The ten-minute hidden track of undistinguishable banging, squealing, choral "whoas", and indiscernible speech should have been excluded completely.

Apparently OTR's performing skills surpass their knack for recording. When it comes to offering CDs at shows, this disc will sell, but its listeners may ultimately be disappointed. Unfortunately, because albums reach a larger audience, groups head to the studio to make money. My suggestion to audiences is to spend the money on the concert, but leave cash for albums at home.