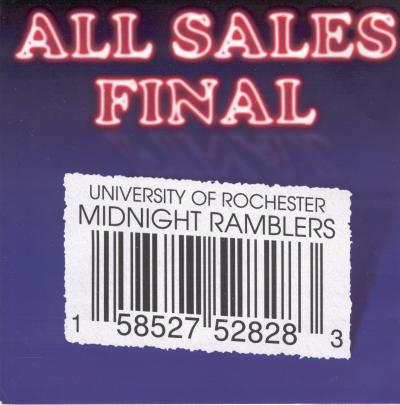 The University of Rochester Midnight Ramblers have tons of energy. They blast into the album with Wild Wild West (from the lamentable movie of the same title) and just keep going. At a time when studio effects, overdubs, and Autotune can suck the life out of a group's sound, these guys keep the energy up. I bet audiences love them.

Unfortunately, energy can't hide the group's lack of polish and precision. The parts aren't exactly in step. The cutoffs aren't clean. The blend and pitch are touch and go. The arrangements are good. Mike McKinsey put his last name into Honesty a bit too obviously. The Star-Spangled Banner is a great arrangement, but after the solo there is no high end to fill out the chords in the first few bars. Brad Hartman is a solid arranger, with nice and full arrangements of Wonderwall and Shimmer.

The soloists are decent. Sam Haddad has a beautiful solo at the beginning of the national anthem. Ceasar Luo is a great soloist on Whenever You Call. The group brought in a (gasp!) girl to do the Mariah Carey part. She has a great range, but is shaky on her runs and has a rather thin and nasal tone. Guys, if you bring in an outsider, bring in one who will knock socks off.

The Ramblers' song selection is rather interesting. They have several overdone songs that are probably crowd pleasers. To complement their earlier version, they do a cover of the Escape Club's Wild Wild West ("She's so mean, but I don't care, I love her eyes and her wild wild hair ..."). Mike Pirri contributes an original love song entitled Thank You. It is fairly standard boy band stuff with phrases like "Life is so hard ..." and "Living life to see you smile".

Artwork: There are no photos of the guys. None. I suppose it doesn't really matter, but it is kind of nice to put a face to the name.

The Ramblers have put forth a decent album that many folks probably buy after seeing them at a show — and that is great. But the discerning a cappella consumer should wait for their next release.

It may not show in the scores, but The Midnight Ramblers have come a long way since their previous album, e=mr2.

The most obvious area of improvement is production. I don't know whether it was more time, more money, or just more skill that went into this CD, but the sound is immediately, obviously better. The energy has also picked up; they've gotten rid of the blahs and have started to sing like they care. Tuning and blend are still strong, if not perfect.

The group has a lot of fun with its arrangements. It's not the world's most sophisticated humor, but I was giggling at the backing lyrics of Wonderwall, which address such topics as the bad teeth of the members of Oasis and the mystery of what a wonderwall is, anyway. However, the occasional use of jarring experimental syllables in otherwise strong arrangements is a bad habit this group needs to break.

The repertoire choices have improved slightly, although there's just no excuse for including such a poor version of Change in My Life. I love that song, and I'll tolerate its repetition if it's done well, but The Ramblers' soloist is not up to the job.

The Midnight Ramblers still aren't at the level where I can recommend their CD to purchasers with no connection to the group. But they aren't far away from that level...keep an eye on these guys in the future.

All Sales Final makes my head hurt. It's like being whiplashed on a blind roller coaster. You have the pinnacle at the start going straight into plunging depths that scare the hell out of you.

The Midnight Ramblers sound really young. Breath support wavers, phrasing can be haphazard, the dynamic palette is limited, and there is a propensity for forced nasality in the solos which carries over into the background.

But you can tell they enjoy what they are doing. I can't fault them in that.

They have this weird habit of digitizing and otherwise enhancing the soloist while trying to effect a very natural sound on the background and vice versa. (This was most noted on my car stereo and computer; my home stereo minimalized the difference). The effect is jarring at best, often removing all emotion from the song and leaving tuning issues and balance mistakes, which should have been corrected.

When they just sing a song, they have moments of magic. Two gems are hidden in the middle of the disc: Honesty and Shimmer. I really enjoyed Mike McKinsey's solo on Honesty, even during the overwrought chorus, though he vaingloriously managed to arrange his name into the background. McKinsey sings with the most conviction in the group. Dan Gross (Shimmer), Sam Haddad (Drive and Star-Spangled Banner), along with McKinsey, are definitely the most convincing soloists.

The last group I was in covered Fuel's Shimmer, and I truly thought that it was going to become a ubiquitous collegiate hit. I'm glad that at least a few groups are doing it. Here they use the electronic effect to the hilt and then break it with a little jazz scatting as a bridge that comes out of nowhere and is totally satisfying! The end of Change in My Life completely transforms this otherwise abysmal rendition.

Let's hear it for original songwriting! Mike Pirri does an admirable job on Thank You as the singer/songwriter, but Steve Marx' arrangement doesn't elevate the song above standard fare, relying too heavily on "doo", "la", "bah", and block choral doubling of the melody in very exposed areas. And then inexplicably, Marx throws in a non-related tag from Dido's Thank You (he doesn't even use the whole line). Maybe there was some thematic correlation that I'm too dense to comprehend.

On the whole, the arrangers are strong. Occasionally, they will use additional lyrics to add humor to make their arrangements cool or hip. It comes across as being sophomoric at best and tends to cause a cluttered mess. It's funny the first few times as you are trying to catch everything, but then it becomes a nuisance. Wonderwall is the major culprit as the second tenors sing during the chorus: "Save me from this song/What the hell is a wonderwall/Let's cut them slack, they're from Britain/ They have bad teeth and they give off b.o.". Brilliant at first, and then not so much.

I'm a fence-sitter on this album, reluctantly giving it a 3, rising just a smidgen above average. I will say buy it just so that you can hear how horrible Whenever You Call is.

For ordering information visit the group's website, or email ramblers@mail.rochester.edu.