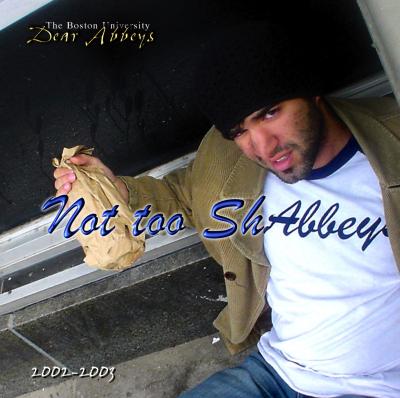 The liner notes list among the Abbeys' accomplishments "12 ICCA awards ... 4 CDs, beat[ing] Mario Kart over 50,000 times, and found[ing] a small principality in the Pacific.". Hm. What they should do next is (1) nominate a fact-checker and (2) use a spell-checker. The single page of notes has a huge number of errors, inexcusably getting original artists' names wrong ("Setvie Wonder", "Hewie Lewis", and "Wierd Al" all make an appearance). It's a shame. It detracts from the group's musical achievements by making the singers seem lazy. They even misspell their OWN names (Dnaiel, Snadman).

Worse, though, the notes set the group up for a fall by overplaying their lauded history. The disc is sub-par. The singers have tuning and, especially, rhythm problems on nearly every track. The falsettist introducing Since You've Been Gone spoils the mood by shooting off the pitch halfway through.

Soloists overplay their hands. I like Victor Sandman (a stage name? a superhero alias?) on Get Out of My Dreams and Kate. On The Way You Make Me Feel, he rips the hell out of the lead, like a lead should. But others leave me empty. Hungry Like the Wolf has none of Duran Duran's sexual cool; it sounds like a rendition by the cast and crew of American Pie. Worst is Wonderful Tonight. Does the lead understand the meaning of the words he's singing? Are the higher notes just too far from his tessitura? Either way, the mood is entirely ruined. Ditto for the Cartoon Medley: did no one tell Mr. Berger-Jones that it's supposed to be funny? And Mr. Mezzanotte's vamp of The Brown Derbies' classic rendition of Gummi Bears falls flat (pun intended).

I don't like the recording. Whoever decided on effects for each track should be replaced. Why set Jesse's Girl, almost alone among the tracks, in a storm drain?

The tracks have a rich, choral sound. Sometimes too rich; polyphonic and polyrhythmic pop tracks would gain a great deal from better mixing (e.g., Get Out of My Dreams was saved only because the soloist is so clear). In general, there is a sameness to the dynamics across parts; the tracks quickly become bland.

The Abbeys would benefit from reading the RARB Forum. Two recent topics apply: songs that should no longer be done and syllable choice. Several songs are on forum posters' hit lists: Inside Out, Father Figure, Jesse's Girl. A group based in Boston should have the opportunity to be at the cutting-edge of collegiate a cappella. To paraphrase the lyrics of a song on the disc, hey guys, get out of the rut and get into the future. And please, guy groups everywhere, please, PLEASE forget entirely about your "love for classical music" or "roots in classical music". Stick to pop. At least (I'm grasping at straws here), at least sing something other than Biebl's Ave Maria, for crying out loud.

With a couple of exceptions, backing syllables are blandly conventional: doo, doo-wah, wah, wah-dah, dah. Sometimes the arrangements call for echoes of lead lyrics. This works on some tracks (Father Figure, where the echoes are part of the original) and fails on others (Inside Out).

A group with such a history of praise, located in the traditional epicenter of collegiate a cappella, should have produced a better album than this. Maybe it was a fallow year, a rebuilding year. In any case, the album is below average, with much work to be done before the next time around.

True to its name, The Boston University Dear Abbeys' latest CD is Not Too ShAbbey. On the other hand, it's not terrific either. There are a few bright spots to be found — soloists are the most consistent positive the album has going for it — but predominantly, it's an album of serviceable, but not very exciting or distinguished, a cappella music-making.

At the beginning and end, the album is book-ended by two odd choices. The opener is The Dear Abbeys' theme song, which appears to have been conceived as a barbershop/doo-wop number but gets a bit of updating here with a hip-hop/rap section, and the CD closes with Franz Biebl's Ave Maria. The theme song fell flat for me — a pretty basic barbershop arrangement, sung with little finesse and not particularly funny — and got the album off to a weak start. The finale is a favorite of mine, and the boys give it the ol' college try but come up short. In particular, the 2nd tenors and baritones seem to have trouble holding their pitch in block chords and stumble further in their moving passages.

Sandwiched between these two tracks are a host of primarily '80s and '90s favorites which are very much a "hit and miss" lot. Typically, the guys do better with the cheesier, vanilla pop and struggle when they branch out into material that requires a bit more "feel". The arrangements of Billy Ocean's Get Out of My Dreams and Duran Duran's Hungry Like the Wolf are not all that sophisticated, but they get the job done, and the solos in both cases will keep you interested. For my money, the best overall performance on the album is George Michael's Father Figure, though the group singing the chorus melody line is lacking in energy and virtually inaudible (besides which, any group attempting this song now is going to suffer by comparison to The House Jacks' version on Drive, which is pretty damn perfect). A close second is Victor Sandman's solo on Michael Jackson's The Way You Make Me Feel which is a fabulous solo (look out Chris Quidlat), but a thoroughly uninspired arrangement (also by Sandman — well, one out of two ain't bad).

Unfortunately, scattered among these few notable tracks is a fair number of rather mediocre efforts. Stevie Wonder's Sir Duke ("Setvie Wonder" in the liner notes) and Huey Lewis' Do You Believe in Love ("Hewie Lewis" in the liner notes) are pretty clunky, if for no other reason than in the former, the tenors don't have the notes to hit the melody line in the chorus with any real power, and in the latter, the tenors can't keep the title of the song in tune. (Plus, in the former's case, they're once again competing with a near-perfect cover by Blue Jupiter on Ear Candy). Other relative lowlights are yet another cartoon medley — seemingly very popular on the collegiate circuit these days — with forced, awkward transitions, sketchy tuning, and general lack of wit, and a Jesse's Girl that tries to be funny in the formality of its arrangement but instead, only succeeds in draining all the cheesy fun out of the song.

I have a feeling that The Dear Abbeys are great fun in live performance. The nostalgic material they choose, the overt humor they incorporate into their songs (as well as some subtler musical allusions), and the energy they bring to their singing no doubt translate into a good time for their audience. In the studio, however, it's just their voices and the microphone, and in that purest of areas, they need a bit of work.

The first performance my a cappella group ever gave, way back in February of 2001, was at a festival at a tony private high school in Connecticut. We shared the stage with seven other groups, including The Boston University Dear Abbeys. I remember being distinctly impressed with The Abbeys; they wore their love for singing on their sleeves without resorting either to unfunny frat-boy toilet humor or to tux-and-tails formality, as so many other all-male groups do. The result was a supremely entertaining show. While it appears that they didn't put a whole lot of care into their latest album, Not Too ShAbbey, their talent and charm, well-captured here, nearly overcome the disc's many flaws.

Let it be known, these guys can REALLY sing. I was excited to finally hear the much-lauded Victor Sandman, and his three solos more than fulfilled my expectations. Blessed with an enormous range and perfect clarity to the very top, also a master vocal percussionist and capable arranger, Sandman has a bright musical future. Yet he wasn't even my favorite soloist on the album. That honor would go to Jordan Feinstein, who brought a richness beyond his years to Eve 6's Inside Out. Daniel Berger-Jones's sultry half-whisper on Father Figure is another highlight. Rob Mezzanotte also has a beautiful voice, which the listener only gets to hear on the damned Gummi Bears Theme. Shame on you, Dear Abbeys. The block performances are musically tight, energetic, and reasonably well-tuned, and it is easy to see why The Abbeys have done very well at the ICCAs over the years.

The Dear Abbeys' arrangments are simple but functional. In the future, the group's arrangers should strive to write lower tenor II parts; too often, a pitchy strain is audible in the second-highest note of the chord. Song choices could use some work; a few are unusual and fresh (Do You Believe in Love?, Kate), but they don't make up for a glut of overdone standards. Oh, and if I am subjected to one more cartoon theme medley, I might have to scream. On the other hand, The Abbeys' Anthem, written by alumnus Dan Pritikin, is charming, funny, and a good start to the album.

But, as I mentioned before, the disc seems like a careless rush job. It sounds more than anything else like the raw tracks for what will eventually be an excellent album, somehow released despite the fact that they had forgotten to mix it. All parts are decently recorded, but part balance is hit-or-miss, reverb is often strangely lacking, and the minor pitch troubles that occur when the second tenors sing too high could have been easily fixed. I am highly suspicious of the fact that no engineer is credited.

I also have to give the group a major slap on the wrist for the typo-ridden liner notes. No listener is going to be favorably biased toward your album when such renowned soloists as "victor Snadman" and "Dnaiel Berger-Jones" sing the greatest hits of "Setvie Wonder", "Wierd Al Yankovic", and "Ben FOlds". There is simply no excuse.

Two tracks should have been left off entirely. Though I hold the apparently minority opinion that Eric Clapton's Wonderful Tonight is an excellent and beautiful song, it is done no favors by The Abbeys' glacial tempo. And Jesse's Girl, a song I've heard a cappella far too many times, never attains any momentum because Sean Landers' arrangement constantly interrupts itself with musical jokes that I don't get.

The rest of the album is a fun listen, proving that a very talented group can occasionally get away with ShAbbey production values. While it is far from a must-buy, those who have seen the group's excellent live show and want a memento would probably not be disappointed.